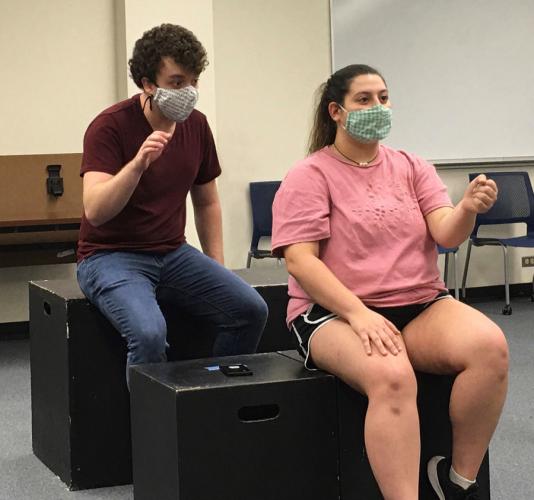 Rehearsing a scene from the SFA School of Theatre’s presentation of “Rideshare/Overshare” are Frisco junior Benjamin McElroy in the role of Mike and Linn junior Makayla Moreno as Sasha. 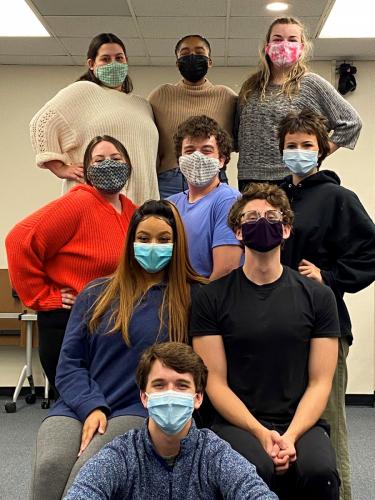 Each of these characters has a unique personality and an equally unique costume specifically designed to fit the wacky persona developed by the imaginative student actors.

School of Theatre Professor Angela Bacarisse directs the play, which she describes as “just a nice story with some quirky folks inhabiting it.” The play will be presented at 7:30 nightly Tuesday through Saturday, Nov. 10 through 14, in Kennedy Auditorium on the SFA campus. It will also be livestreamed.

By Ian McWethy and Carrie McCrossen, “Rideshare/Overshare” is a play about Mike and Elaine, a young couple heading out to meet each other on a blind date. They each decide independently to take an UBER to get there, and then they find themselves paired with the weirdest drivers on the road.

“I created my characters by giving them back stories, their own personalities, and by making them as close to a real human as possible,” she said. “A distinct difference they have is their voices. Although some may have the same dialect, a slight change in tone or volume makes them a completely different person.”

Alexis Hargy, a junior from Katy, plays five different characters, including her understudy role for main character Elaine. Hargy used her own life knowledge as a source to bring her characters to life.

“I took my real life experiences and applied those thoughts, feelings and emotions to the characters on stage,” she said, adding she also determined her characters’ relationships with other characters in the play to help her further develop how she portrayed each role. “Some characters have accents and some don’t, which can really make certain characters more distinct than others.”

With so many characters moving around in the actors’ heads, how do the students remember who they are currently playing on stage?

“I keep them apart on stage by having different mannerism for each character,” Jordan said. “It can sometimes be a challenge to remember which character does what, and to hide my own mannerisms. With all of that being said, I love being able to play so many different characters in one show.”

Hargy said her solution to keeping characters apart on stage is to “focus on getting my next character ready once I’m done with the one before it.”

“Sometimes it can become challenging if you aren’t fully paying attention to each scene,” she said.

“I think the best characters are just extensions of yourself,” he said, “so with each character I’m just exaggerating some part of me. That sounds dumb, but it’s the only way I can think of how to go about it.”

Costume changes help the actors remember who they are on stage. Baytown senior designer Jordyn Averitte has put her creative ideas in overdrive to make each costume and character stand out. Including the cast’s understudy roles, there are about 45 costumes needed for the play. Bacarisse provided character information for Averitte to help her brainstorm designs, and Averitte attended rehearsals to see how each actor performed their characters differently so she could adjust the costumes accordingly.

“Since many of the characters appear only briefly, the actors may have different ways of performing that character between casts and therefore require a completely different costume, which is something I have not encountered before, but I do enjoy the variety,” Averitte said.

Roles will be switched for the Wednesday and Thursday performances, allowing the actors to play some of the understudy roles they have worked so hard to prepare for, according to Bacarisse.

“With the worry about COVID, we made sure that if anyone in the cast had to quarantine, that the ‘show would go on,’” she said. “Two actors at different times missed rehearsals for two weeks due to being in quarantine. I thought that since they put so much effort into the understudy roles, they should get a chance to perform as those characters.” Tuesday, Friday and Saturday performances will be presented as cast.