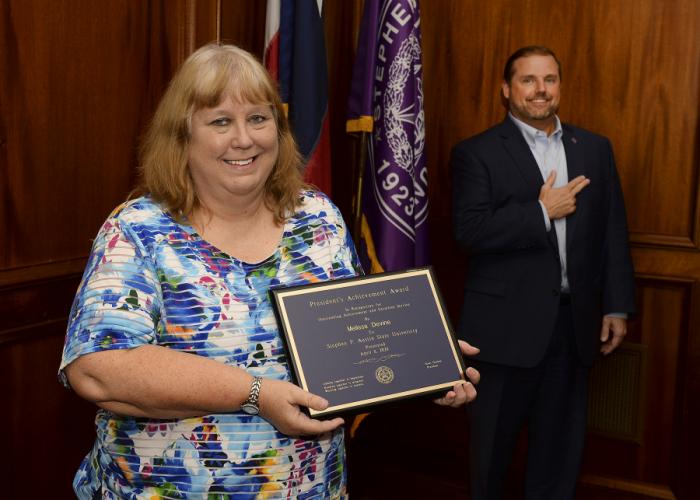 Melissa DeVine, administrative assistant for the Stephen F. Austin State University School of Music, is the recipient of a 2020 President’s Award. DeVine is pictured with Dr. Scott Gordon, SFA president.

“And I plan to stay as long as they’ll let me,” she said.

DeVine is one of this year’s President’s Award recipients, an honor announced recently by Dr. Scott Gordon, SFA President.

The administrative assistant to Dr. Gary Wurtz, director of the SFA School of Music, Devine’s “official” nomination by her peers and colleagues described her as “effective, upbeat and enthusiastic.” An unofficial extenuation of that description could easily include witty, entertaining, fun-loving and a bit of jokester.

“Her knowledge of policy and procedures, coupled with her institutional memory, allow her to find effective solutions to almost any issue that might arise,” Wurtz said in his nomination. “She embraces students as stakeholders, offering them solutions to problems encountered while registering, scheduling and navigating the processes involved in completing their education.”

DeVine came to Texas while she was in junior high by way of Minnesota, Wisconsin and New Jersey.  “My father was in finance and ended up in Dallas,” she said. “I graduated from Lake Highlands High School in Dallas.”

DeVine began her association with the then-Department of Music at SFA as a student assistant while she was earning her B.B.A in general business. When the secretarial position opened a year later, she applied and was hired. During her time at SFA, she’s watched enrollment in the Department of Music climb from 160 in the early 1980s to the School of Music’s current enrollment of 480. During this time, she’s worked as an assistant to music leaders including Robert Miller, Ron Anderson and John Roberts. She watched the music building’s size double during a massive renovation in 1985. As the music program has grown, so has the realm of her job.

“Yet she always finds a way to get everything done,” Wurtz said.

“The scope of the job is ever-changing as the educational climate changes,” DeVine said. “The current challenge is COVID – working around new teaching modalities and locations and making sure we have all of the equipment and supplies to make the changes. We’re constantly adapting.”

And adapting in the COVID era for fine arts instruction is very different than adapting teaching modalities in subjects like history, math or English.

“Currently the music ensembles are having rehearsals outside for safety concerns, which is fun to watch,” DeVine said. “It shows how different our needs are from many other disciplines.”

“Many graduates procure teaching positions in the area, and it’s always nice to see them come back and work for us during our summer camps,” she said. “I have a staff of student assistants who help with the general office duties, and I build close relationships with them and watch them mature both in their course studies, office skills and personal lives.”

When she’s not in the music office, DeVine can often be found playing the piano, traveling or rehearsing for a production at Lamp-Lite Theatre, Nacogdoches’ community playhouse.

“I have been taking piano lessons for many years,” she said. “I don’t perform; I just like to play. I also bought a small accordion and can play a few songs.”

She’s traveled with the SFA A Cappella Choir, the Lumberjack Marching Band and the Lumberjack basketball team. Some of those trips have taken her to England, Ireland, Northern Ireland, Germany, Austria, the Czech Republic and Italy.

“The Lamp-Lite Theatre has been my artistic outlet for 20 years,” she said, “and I do it mostly because it’s fun. I’ve built up many great friendships from my time at the theatre, and it is rewarding to collaborate with others to bring something to the community. It also helps me understand musicians and what they get from performing, as well.”