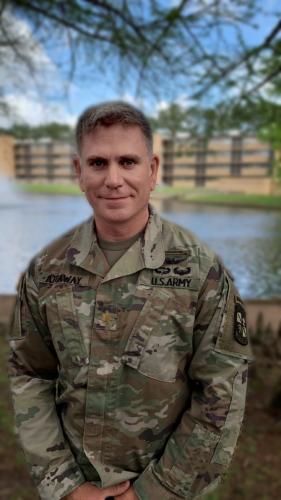 Stephen F. Austin State University Professor of Military Science James Attaway was recently promoted to lieutenant colonel. Attaway is a 2004 SFA graduate and began his Army career in 1998. He has served with numerous units across the world before becoming SFA’s chair of military science in 2018.


NACOGDOCHES, Texas — In setting the example of “being the best,” Stephen F. Austin State University Professor of Military Science James Attaway recently was promoted from the rank of major to lieutenant colonel.

“Being promoted to lieutenant colonel means a lot to me,” Attaway said. “I started in the Army as a private more than 20 years ago and plan to retire in a few years with my final rank as a lieutenant colonel. It is incredible to think back on all I have experienced.”

Attaway, who graduated from SFA in 2004 with a Bachelor of Science in kinesiology, began his Army career in 1998 when he enlisted as an infantryman. He has since completed training at Ranger, Airborne, and Air Assault schools and more. He has served with numerous units across the world, including Kosovo, Iraq, Korea and Afghanistan.

Attaway was selected as SFA’s chair of military science in 2018. Since then, he has overseen a successful 50-year anniversary for the department, helped establish the 1st Lt. Kile G. West 5K and 10K Memorial Race, and aided the ROTC Ranger Team in winning first place in the Task Force Ranger Challenge for the first time in SFA’s history.

He said he is happy to be “stationed” in Nacogdoches, where he and his family plan to remain after his retirement.

“After 17 years of marriage and 10 moves, it feels really good to be putting down roots,” Attaway said.

Even though his rank has changed, Attaway is still committed to training future Army officers for commissioning.

Despite the challenges brought about by the COVID-19 pandemic, the faculty and staff under Attaway’s leadership have continued to train cadets. Due to safety restrictions, the department is preparing for course modality changes and physical distancing regulations.

“As both Army officers and noncommissioned officers, part of our job is to adapt, overcome and complete missions,” Attaway said. “While COVID-19 has changed how we teach, it hasn’t caused us to stop teaching and mentoring the next generation of Army officers.”