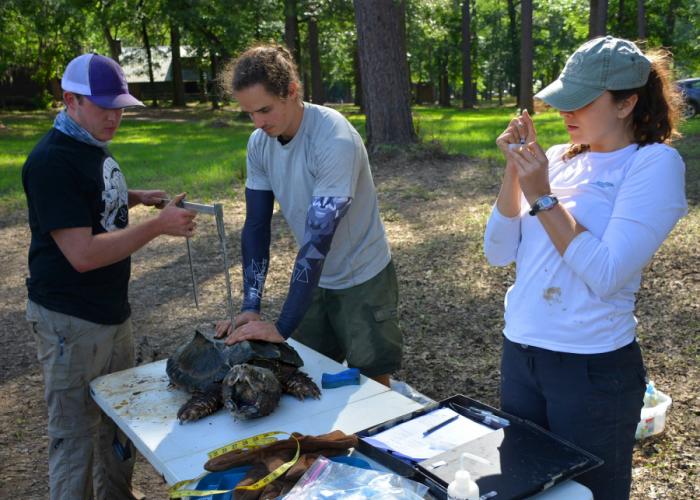 Thanks to funding from the U.S. Fish and Wildlife Service’s State Wildlife Grant Program, researchers at Stephen F. Austin State University’s Arthur Temple College of Forestry and Agriculture are investigating the occupancy and mercury content of alligator snapping turtles throughout East Texas. The species, once widely distributed throughout the Southeastern U.S., is now listed as a species of conservation concern by every state within its natural range. Pictured from left, SFA researchers John Michael Arnett, David Rosenbaum and Laura St. Andrews take measurements of the upper part of the shell, known as the carapace, of an alligator snapping turtle. 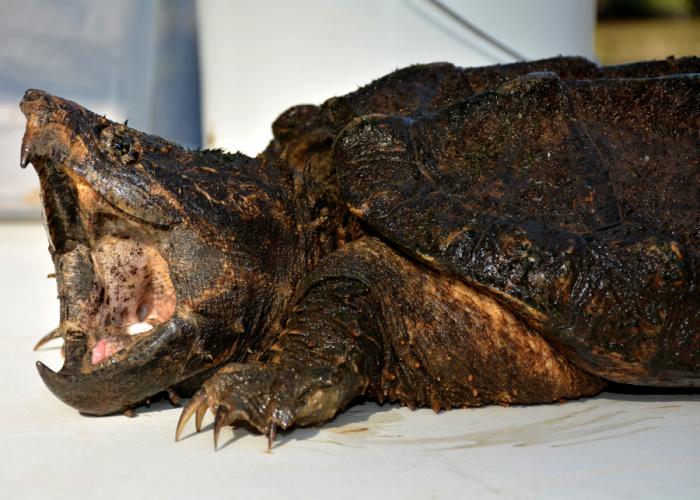 
NACOGDOCHES, Texas — During one of the last cool mornings in May, an aluminum boat filled with four Stephen F. Austin State University researchers navigated a muddy waterway to a hoop net trap located under the drooping limbs of a streamside tree. As forestry graduate student David Rosenbaum balanced on the bow of the boat and hoisted the trap above the water, Dr. Christopher Schalk, assistant professor of forest wildlife management, released a shout of excitement as the wide, spiked, moss-covered shell of an alligator snapping turtle became visible.

While the untrained eye can easily confuse this species with the common snapping turtle, there are distinct characteristics that set the two apart.

Another defining characteristic of the alligator snapping turtle is the appearance of the hard, upper part of the shell known as the carapace.

“The alligator snapping turtle has much stronger serrations on the shell and along its edge compared to common snapping turtles,” Schalk said. “However, those can actually wear down over time due to older turtles rubbing up against root banks.”

Given its sheer size and prehistoric appearance, it’s not hyperbolic to refer to this species as dinosaurs of the turtle world. Evidence suggests ancestors of the alligator snapping turtle began to appear in the fossil record more than five million years ago during the Miocene era. Since then, descendants of that ancient species carved a niche in the waterways of the Southeastern U.S.

However, modern populations of the alligator snapping turtle, the largest freshwater turtle species in North America, have been so drastically reduced that it is now listed as a species of conservation concern by every state within its natural range. The U.S. Fish and Wildlife Service also is considering federal protection of the species under the Endangered Species Act.

Rosenbaum explained that life history traits of the species, along with unregulated harvest and habitat loss, have resulted in a cascading destructive effect that recently led Texas to change the species’ status from threatened to imperiled.

“They take a long time to reach sexual maturity, and their nests have a really high mortality rate,” Rosenbaum said. “If you kill one adult female in a population it has a huge effect down the line because that female could have produced offspring year after year for 50 years.”

During the next two summers, Rosenbaum will survey 23 sites across 20 counties spanning from the Sabine River north to the Red River and southwest to the Navasota River.

“My main goal next summer is to fill in the gaps where records of the alligator snapping turtle are missing,” Rosenbaum said. “There are a few counties that have no records of the species, but the counties surrounding them have documentation and suitable habitat.”

In addition to documenting and marking the turtles, Rosenbaum is collecting tissue to analyze the bioaccumulation of mercury.

“You tend to see mercury biomagnify as you move up the food chain, so with each trophic transfer, you’re becoming heavier in mercury,” Schalk said. “Alligator snapping turtles are major predators, and a lot of the fish they eat are already high up on the food chain to begin with, so they’re going to potentially be heavier in mercury.”

Once prized for its meat, it is illegal to harvest an alligator snapping turtle in Texas, and personal harvest is limited in Louisiana. Despite this, both Schalk and Rosenbaum said illegal poaching still occurs.

“In some cases, people are still consuming them,” Schalk said. “Aside from their threatened status, alligator snapping turtles possess traits that, in my opinion, make them an undesirable source of meat because of the way mercury bioaccumulation occurs.”

Because the species is almost exclusively aquatic, with females emerging only to nest on land, they can be overshadowed by more visible, terrestrial threatened or endangered species, such as the Texas horned lizard or red-cockaded woodpecker. Their lack of visibility, however, does not imply a lack of ecological importance.

“It’s an iconic species here in Texas,” Schalk said. “They’re a good indicator species for a healthy ecosystem — one that’s not overfished and has stable populations that are indicative of low anthropogenic impacts.”

In addition to being a top predator, Schalk also explained that the turtles actually produce a considerable amount of food for other animals, such as raccoons, opossums and larger fish through the predation of nests and juveniles.

“They’re a pretty easy animal to be enthusiastic about just because they’re so large and aggressive looking,” Rosenbaum said. “There’s definitely an air of mystery and lore about them that makes them attention grabbing.”

For more information on this and other research, visit atcofa.sfasu.edu.