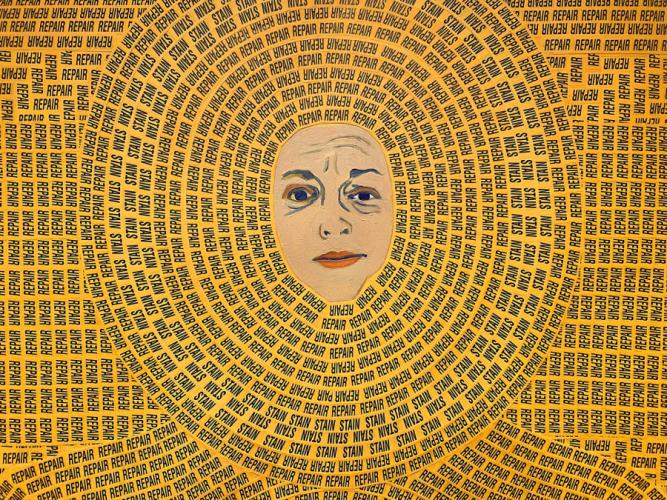 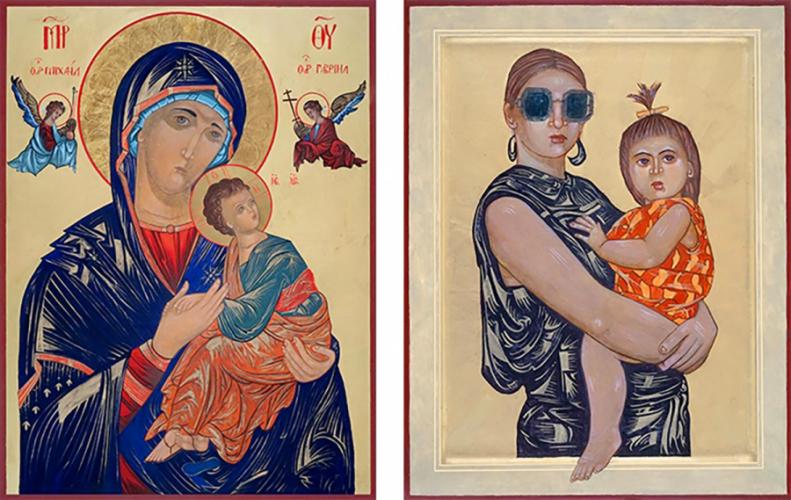 Karen Eisele’s iconography exhibition “Encoded” will be presented Jan. 21 through March 20 at The Cole Art Center @ The Old Opera House.

In “Found/Loaded,” artist Sarah Fisher collaborates with fashion designer Rachel Anderson to transform found objects as diverse and seemingly unrelated as dry cleaning identification stickers, sacramental furniture, grocery bags and newspapers. “Electric color, overt and covert use of text, and idiosyncratic patterning wrap, even cocoon, the objects in words to depict psychological aftereffects of life in the human group,” Fisher writes in describing the works. She states that central themes in the exhibition are “the cost of belonging and resilience in the face of trauma.”

The exhibition “taps into a divergent array of emotions” Fisher writes, “from adoration to anxiety, awe to horror, disgust to triumph, fear to fearlessness, forgiveness to peace, and asks the question: how do we reconcile our primal craving for community and belonging with our yearning for authenticity and humanity?”

The work in “Found/Loaded” is primarily text based, mixed media and found object, although it includes some drawing and painting.

In describing her exhibition “Encoded,” artist Karen Eisele writes that Byzantine iconography has “a rich history where the techniques used for each aspect of the painting have symbolic meaning.” These traditions have remained unchanged for centuries.

“I create icons in the tradition of Byzantine orthodox painters – utilizing stylized figuration, areas of interlocking color and radiant gold leaf,” she writes. “I borrow the style as a way to explore the contemporary visual landscape of icons. I find a clear parallel between religious icons of the Byzantine era in today’s dominant consumer culture.”

To begin an icon, a birch or poplar board is prepared with many layers of gesso made from marble dust, chalk dust and rabbit skin glue. Traditionally, 33 layers were used to represent Christ’s life. This mixture is applied over linen that has been soaked in the glue. Then, 24k gold is applied for the halo and, depending on the Greek or Russian tradition, for the background.  This precious metal serves as a visual “spiritual doorway” between heaven and earth.

Colors are also important in the icon, Eisele said. For example, Mary’s blue robe stands for faith and humility while the red robe speaks to the mystery of divine life. Mary is often painted with three stars attached to her garments. These represent not only virginity, purity and power, but also the Holy Trinity, and Christ’s life, death and resurrection. Each star is made up of eight rays for the seven days of creation and Christ’s return.

Eisele’s work invites viewers to contemplate the ways in which the past is visually encoded upon the present.

“An artistic examination of these icons offers us a deeper understanding of our current visual culture,” she added.

The shows run Jan. 21 through March 20 and are sponsored in part by the SFA Friends of the Visual Arts, William Arscott and the Nacogdoches Junior Forum. Admission is free.