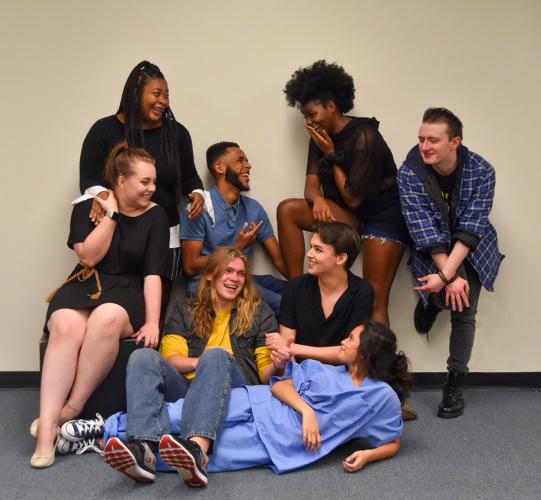 
NACOGDOCHES, Texas – When Cleo House Jr., director of the School of Theatre at Stephen F. Austin State University, began looking at scripts to include in this year’s Mainstage Series of plays, he wanted a storyline in which themes were “timely and would speak to a young adult audience.”

He found that in Bert V. Royal’s “Dog Sees God: Confessions of a Teenage Blockhead.” It’s a play about a teenage boy, CB, who begins to question the existence of an afterlife after his dog dies. The School of theatre will present the show at 7:30 nightly Oct. 6 through 10 in Kennedy Auditorium on campus. It will also be live streamed.

While the play contains some universal themes, many slant more toward “this generation of teenagers on the cusp of adulthood,” House said. “But it also provides an opportunity for reflection for older folks.”
“It’s just a very entertaining, funny and thoughtful show,” he added.

Unable to find solace from his friends after his dog's death, CB turns to an artistic classmate, but their rekindled friendship pushes the bounds of what CB's friends are willing to accept, forcing CB to consider who he wants to be. “Dog Sees God” is a touching and thought-provoking play about being different in a school filled with people who all pretend to be the same.
The show in many ways is inspired by Charles Schultz’s “Peanuts” cartoon characters, but in an “unofficial capacity,” House said, adding student actors have to consider how much they want to reference Schultz’s comic strip.

“The references are definitely there in the play,” he said. “But the challenge for the actors and the designers is to use the comic as inspiration, but not as source material. In the end, at least in my directing philosophy, inspiration must mostly come from the script.”

Among the challenges of performing any play in the near future, in addition to the obstacles the COVID pandemic has presented, is that the School of Theatre cannot perform in its traditional space of Turner Auditorium. Because of the ongoing renovations to Griffith Fine Arts Building, theatre students are performing in alternate venues, which primarily means Kennedy Auditorium, for the next two years.

“This temporary space has a lot of limitations and challenges, some that we already know about and others we’ve yet to discover,” House said. “Ultimately, I’m not overly concerned, because we do have a great team of collaborators working on the show, and I’m sure the kinks will be worked out smoothly.”

Beyond performance space, House thinks the biggest challenge for student actors “is mental.”

“There is a lot stress and trepidation as it relates to COVID-19,” he said. “Naturally, we are taking precautions in rehearsals with sanitation and mask wearing. However, students’ excitement to finally be doing theatre again has been a ray of light for them, and they are all very happy to present the show for an audience.”

The “Peanuts” comic strip features essentially an all-white group of kids except for one, and his character isn’t included in the “Dog Sees God” script. But the SFA presentation of the play has “an extremely diverse cast of Black, Hispanic, Latinx and white” characters, House said.

“We are employing a casting practice known as non-traditional/cross-cultural/multi-cultural casting,” he said. “In this practice, we make casting decisions based on an actor’s talent, first, and their racial makeup, second. It doesn’t mean in casting that we ignore what race people look like, but we are thoughtful about it.”

House said there is a current movement toward accountability in American theatre as it relates to diversity and representation.

“There’s no reason why a character in the show that is inspired by one the ‘Peanuts’ characters cannot be portrayed by a student of color,” House said, “but when I research online, I don’t see it. So I’m very happy that the School of Theatre is being actively progressive in this way.”

Because of social distancing requirements, seating in Kennedy Auditorium will be limited for each performance. Patrons are required to wear masks. Actors on stage will not wear masks while performing. However, performance areas are more than six feet away from patron seating.

“I would encourage those who want to see the shows in person to contact the box office and get their tickets as soon as possible,” House said. “Otherwise, we will have the live streaming option, as well, which was very successful this summer, and people from out of state were able to see shows and support their loved ones.”

House said “Dog Sees God” is for mature audiences and would likely be rated R in movie terms, mostly due to language and subject matter. He believes the show is “great for anyone who loves the theatre.”