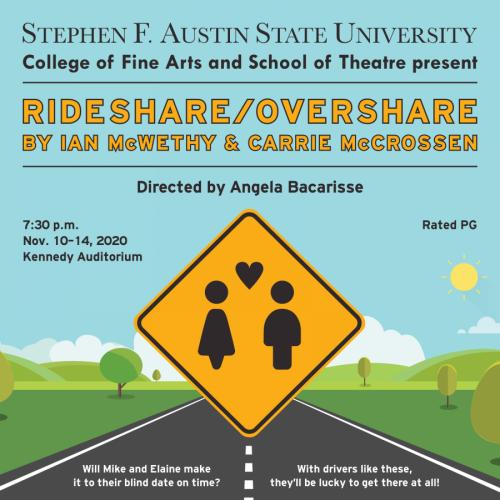 The SFA School of Theatre will present the play for “Rideshare/Overshare” by Ian McWethy and Carrie McCrossen Tuesday through Saturday, Nov. 10 through 14, in Kennedy Auditorium on the SFA campus. The play will also be livestreamed. Visit boxoffice.sfasu.edu or call (936) 468-6407 for ticketing or virtual access information.


NACOGDOCHES, Texas – Angela Bacarisse had been looking forward to directing “The Fantasticks” as part of the Mainstage Series this fall for the School of the Theatre at Stephen F. Austin State University.

The theatre professor had eagerly anticipated the casting, costuming and scenic designs for the funny, romantic musical about the love between a boy and a girl amidst the meddling of their two fathers.

“I was really excited to do ‘The Fantasticks,’ but after looking at all the studies and talking to the music faculty, it was going to be really hard to work safely on music – teaching singing techniques to non-musicians wearing masks,” Bacarisse said, … not to mention trying to perfect the unique performance skills musicals require.

Bacarisse had the script for “Rideshare/Overshare” in her cache of potential scripts for the School of Theatre’s biennial trip to Scotland for the Festival Fringe. She thought it would be well-suited for her theatre students to tour at the festival “because it can be produced very simply,” she said.

There were a number of reasons why “Rideshare/Overshare” was brought into the Mainstage Series to replace “The Fantasticks.” The College of Fine Arts and School of Theatre no longer had access to Turner Auditorium in the Griffith Fine Arts Building because of a planned renovation/construction project that will take two years to complete. As a result, Kennedy Auditorium has become the main performance space for theatre students, and technical aspects need to be kept at a minimum because of facility limitations. Additionally, “Rideshare/Overshare” has the same number of cast members as “The Fantasticks,” so it just made sense to make the lineup switch.

By Ian McWethy and Carrie McCrossen, “Rideshare/Overshare” is a play about Mike and Elaine, a young couple heading to meet each other on a blind date. They each decide independently to take an UBER to get there, and then they find themselves paired with the weirdest drivers on the road.

“Their various experiences with drivers is what brings humor and pathos to the story,” Bacarisse said.

The ensemble for “Rideshare/Overshare” plays multiple characters, so students will need to create distinct differences in each of the roles they take on, Bacarisse said adding that creates a special challenge for her in “keeping track of who is on stage and what character they are currently playing!”

“It all takes place in cars, so there will be a need to keep the action interesting and the audience focused on what the characters are saying and experiencing,” she said.

Bacarisse said the play is for ages approximately 10 and up, “simply because younger kids probably won’t find it interesting.”

She further described “Rideshare/Overshare” as “just a nice story with some quirky folks inhabiting it.” The play will be presented at 7:30 nightly Tuesday through Saturday, Nov. 10 through 14, in Kennedy Auditorium on the SFA campus. It will also be livestreamed.

“I hope people get a chance to come out and enjoy some live theatre, or they can stay in and enjoy a live performance on YouTube,” she added.