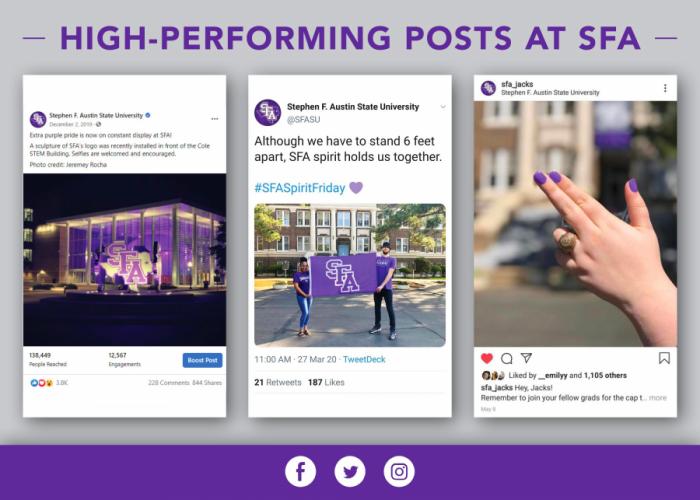 Rival IQ, a social media analytics company, ranked Stephen F. Austin State University No. 32 among 338 universities nationally and No. 3 in Texas for social media engagement — a metric of growing importance in an increasingly virtually connected world. Pictured here are snapshots of one high-performing post from each of SFA’s main platforms.


NACOGDOCHES, Texas — Among 338 universities researched, Stephen F. Austin State University ranked No. 32 nationally and No. 3 in Texas for social media engagement — a metric of growing importance in an increasingly virtually connected world.

“I’m proud to see University Marketing Communications’ social media team recognized for its exceptional work,” said Dr. Scott Gordon, SFA president. “Social media engagement has been growing in importance throughout the past decade and has been particularly valuable during the global pandemic. As plans continue to evolve at a rapid pace around the world, it will remain a front-line tool for sharing those changes.”

“SFA is ranked in the top 10% among universities for overall consistent, steadily engaging accounts encompassing all social media platforms,” said Dr. Shirley Luna, SFA’s executive director of University Marketing Communications. “It’s imperative SFA keeps its audience engaged because it is one of our main forms of communication with current and prospective students, alumni, and the SFA and Nacogdoches communities.”

Using survey data and a weighted formula, Rival IQ generated an overall engagement ranking for each school that blends total engagement with engagement rates, according to its report. Rather than simply comparing total clicks, likes or shares, this type of weighted formula reveals true engagement percentages so that a larger university’s sheer number of followers doesn’t bury smaller universities with a naturally lower follower base.

“Engagement rate evens the playing field between accounts with varying audience sizes,” said Kerry Whitsett, SFA University Marketing Communications social media specialist. “Obviously, an account with 100,000 followers will have more comments on any given post than an account with 20,000. So, rather than comparing total number of comments on a post, it compares the number as a percentage in relation to the number of the account’s followers.”

“One of the reasons SFA is ranked so high is because the marketing team communicates with its followers — and our communication is not one way,” Whitsett said. “We like and make comments on posts, we answer questions, and we congratulate people when they post about being accepted to SFA and upon graduation. We tell people visiting our campus, ‘We hope you enjoyed your day at SFA!’ We want our audience to know SFA is actively engaged with them.”

Of the three individual platforms, SFA’s performance on Twitter was the best ranked, landing the No. 12 position nationally.