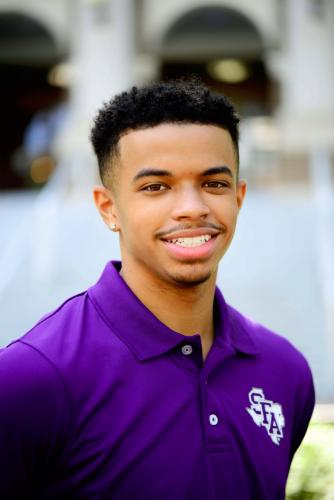 A senior sports business major from Carrollton, Moore has a track record of excelling during uncertain times. He successfully completed a full load of classes during the spring semester after making the transition from face-to-face to online classes. Now, he will balance his senior year of college, a global pandemic and his duties as student body president.

“I really just want to make sure that not only am I keeping myself safe but also keeping others safe as well,” Moore said. “For SGA, it’s definitely going to be trying. Nobody’s ever experienced this, so we’ve already had to adjust and really just make sure that everything we do is for our organization and also for the students.”

Though Moore was accustomed to city life growing up in the Dallas-Fort Worth metroplex, he fell in love with the beauty of Nacogdoches and the campus the summer before his freshman year.

“It really opened my eyes to how beautiful the campus is and just the community itself,” Moore said.

Pledging Kappa Alpha Psi fraternity as a sophomore, he further cultivated his leadership skills and gained a desire to make a positive impact on the campus community. He soon became involved with SGA, elected as civil affairs committee chair after his first semester. As committee chair, Moore concentrated his efforts on getting students involved in community service projects. After only a year with SGA, Moore decided to try his hand at running for president.

“I witnessed an underrepresented population go unheard, which made my decision easier running for student body president,” he said. “I wanted to make sure that any misrepresentation is heard loud and clear, and effective manners to structurally adapt from those flaws are in place.”

As president, Moore is turning his focus to inclusivity, striving to provide a platform for all students.

Moving into a semester characterized by a global pandemic might be daunting for some, but Dr. Adam Peck, assistant vice president for university affairs and dean of student affairs, said Moore is the perfect student to lead the student body during the current time.

For those apprehensive about the upcoming school year, Moore advises students to take necessary precautions, but he is optimistic about the outcome.

“SFA has given us an opportunity to have a choice on how to take our classes before returning to campus,” Moore said. “As long as you stay safe, wear a mask, and just follow the protocols and guidelines, there shouldn’t be any problems with returning to campus.”