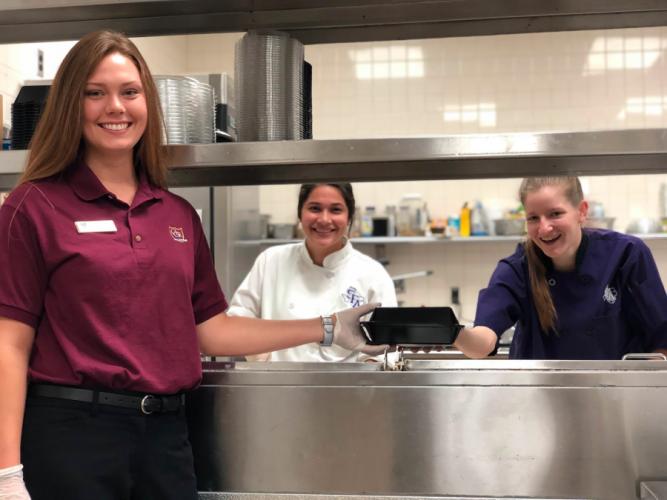 Kamrin Sprott of Livingston, Arlene Turcios of Tyler and Kelly Allen of Atlanta, Texas, worked at The Country Club of Little Rock in Arkansas during the summer to meet their internship requirements for the hospitality administration program at Stephen F. Austin State University. Before the pandemic hit, the three seniors were headed to Yellowstone National Park for internships. At the same time those internships were canceled because of COVID-19, the country club had to revamp its internship program, which normally recruits interns from India, Jamaica and the Philippines. Because of international travel restrictions, the club’s internship coordinators looked closer to home to find interns this year, and Sprott, Turcios and Allen were able to gain valuable real-world, hands-on experience despite the pandemic. Photo courtesy of Arlene Turcios 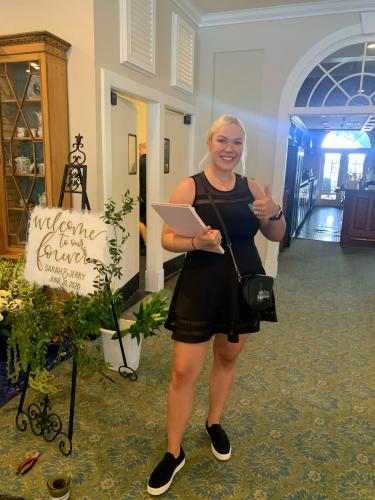 Dallas Norfleet, a senior from Georgetown, Texas, traveled to Myrtle Beach, South Carolina, to complete her internship for Stephen F. Austin State University’s hospitality administration program. At Stunning and Brilliant Events, Norfleet helped plan birthday parties, proposals and weddings. One reason she sought out the internship in Myrtle Beach was because she hopes to live in the area one day, and it gave her the opportunity to build some professional connections. Photo courtesy of Dallas Norfleet

But with the help of a country club in Arkansas and an event planning business in South Carolina, four seniors in Stephen F. Austin State University’s hospitality administration program completed their internships. They also had a lot of fun this summer serving others and building their confidence for their future careers.

Kelly Allen of Atlanta, Texas, Kamrin Sprott of Livingston and Arlene Turcios of Tyler honed their culinary and operations skills at The Country Club of Little Rock, while Dallas Norfleet of Georgetown, Texas, helped plan birthday parties, proposals and weddings at Stunning and Brilliant Events in Myrtle Beach. All four earned credits for their hospitality administration internship course at SFA.

“I am proud of Arlene, Dallas, Kamrin and Kelly for taking advantage of the opportunities presented to them to apply their knowledge and skills in real-world, hands-on settings during this time of uncertainty for the industry,” said Dr. Mary Olle, associate professor of hospitality administration in SFA’s School of Human Sciences.

Most of SFA’s hospitality administration students complete their internships during the summer at destinations all over the country and abroad, according to Olle.

“Unfortunately, COVID-19 resulted in most of our students’ internships being canceled,” she said.

Though their original internship plans were canceled, Allen, Sprott and Turcios didn’t have to go the virtual route.

David Sumpter, senior food and beverage manager for The Country Club of Little Rock, is part of the team that coordinates the club’s internship program. The team usually recruits 12 to 15 interns from India, Jamaica and the Philippines to create a cultural experience for international interns who learn management and leadership skills to use in their careers when they return home. They gain general knowledge of the club, including its banquet and events operations.

But the pandemic prevented these interns from leaving their home countries this summer. It also greatly reduced the club’s banquet and events operations.

“We had to drastically change our summer internships due to COVID-19,” Sumpter said.

The focus of the internship shifted to the club’s pickup and to-go operations, the pool and snack bar areas, and cost controls and inventory procedures. Intern recruitment also changed.

“We reached out to local universities for the first time and received a huge response,” Sumpter said.

Olle heard Sumpter’s call and notified Allen, Sprott and Turcios, who learned in May that their summer internships at Yellowstone National Park in Wyoming had been canceled due to COVID-19.

“It was really late in the game to be looking for a new internship,” Sprott said.

Turcios had been looking forward to summer in Wyoming.

“I was excited for the Yellowstone internship because exploring nature is a favorite hobby of mine, and to live and work in the world’s first national park sounded like a dream,” she said. “But I understood the circumstances and why they had to withdraw my internship offer.”

Allen added, “Yellowstone was going to be a risky situation. The employees are housed in dorm-style living, so it would have been nearly impossible to separate us if there was a COVID outbreak among the staff.”

The three were preparing to replace their in-person Yellowstone internships with the hospitality administration program’s virtual internship when Olle told them about the late-breaking openings at The Country Club of Little Rock. All three jumped at the opportunity, and after some Zoom interviews, they secured their summer in Arkansas at one of the oldest country clubs west of the Mississippi River.

Sumpter was glad to have the help.

“Arlene, Kamrin and Kelly stepped in and became part of our family,” he said.

Allen and Turcios, who both selected the culinary focus area within SFA’s hospitality administration program, worked with the country club’s executive chef to learn all aspects of the kitchen, food production and cost controls.

Sprott, whose focus is travel and tourism, learned the to-go/pickup operations in the front-of-the-house department and the pool’s snack bar areas. She also helped plan some small banquet events.

“All three were key in the planning and execution of our Fourth of July celebration,” Sumpter said. “We were truly blessed to have partnered with SFA and cannot give enough accolades to Arlene, Kamrin and Kelly for the work they did and for ensuring our club was successful during these challenging times.”

Norfleet, whose hospitality administration program focus is meeting and planning, secured her internship in December 2019, way before summer, because she really wanted to work in South Carolina. While growing up in Central Texas, Norfleet liked to look at pictures from her parents’ college days at Clemson University. The red brick and pine trees of that campus ultimately led her to SFA. She hopes to live in South Carolina one day.

COVID-19 didn’t cancel her internship, but the pandemic did delay Norfleet’s travel to South Carolina and affected the usually very busy summer season at Stunning and Brilliant Events, a franchise known for planning extravagant weddings and parties booked two years in advance.

During a normal summer, the Stunning and Brilliant Events team in Myrtle Beach plans 20 to 30 weddings. This summer, they’ve been able to hold four weddings and six proposals and elopements.

“A lot of weddings were rescheduled or became elopements,” Norfleet said. “One big wedding was outside, and everyone wore masks. We also threw an indoor/outdoor birthday party where masks were mandatory.”

Despite the impact of COVID-19, Norfleet learned a lot from her experience and was most proud of the trust she gained in her manager, Sara McCall, who at 33 has already built a popular event planning franchise.

“One of my greatest successes with this internship is the trust Sara and the company have in me now,” Norfleet said. “My experience here has made me more comfortable to express my opinions.”

McCall relied on Norfleet to handle social media for Stunning and Brilliant Events during the summer.

“Dallas has been wonderful,” she said. “She created multiple documents to help future interns with blogging, design and social media help.”

Norfleet has picked up some tips for her own personal events she’s planning, like her 21st birthday party.

“At midnight, you need to bring out some treats like truffle fries or Big Macs,” she said. “At the wedding for the son of the Waffle House CEO, guests were served waffles and hash browns at midnight.”

Though the four SFA seniors served different roles during their summer internships, they all were drawn to the hospitality field because of their desire to help and serve others.

Sprott and Norfleet’s need to help others initially put them on a medical professional track with majors in nursing and nutrition, respectively. But when that didn’t work out, they both found their way to the hospitality administration program and immediately felt at ease.

“I’m a creative and outgoing person, so this major was a better fit for me,” Norfleet said.

Sprott credits SFA’s hospitality administration instructors with her “great experience” in the program.

“I was welcomed with open arms and lots of excitement from the hospitality professors,” she said. “I knew I was where I was supposed to be.”

Sprott added, “They ensure your success not only in the classroom but also the professional world. They go the extra mile to prepare you and give you the necessary tools and confidence you need to succeed.”

For Turcios and Allen, the internship has helped them gain trust in themselves.

“My biggest challenge during the internship was learning to trust my own judgment,” Turcios said. “I want to open my own restaurant and be my own executive chef one day, so I need to gain that confidence — that trust in my gut in all decisions I make.”

At the beginning of her internship, Allen said she found herself relying too much on Turcios while they worked together in the kitchen at the country club.

“When we went to work in our own areas, I was nervous to be left alone at first,” Allen said. “But I found I was capable of doing what was asked of me. I learned I didn’t need Arlene’s affirmation to make sure I was doing something right. I needed to trust in my own ability and knowledge instead.”

The two culinary students said their biggest success during their internships was similar to Norfleet’s: the trust they gained from their managers.

When Turcios’ managers tried some of her suggestions to better organize the kitchen, Turcios’ confidence grew from seeing her ideas put into action.

“I still don’t know the answer to every question thrown at me yet, but this internship helped me see how much I’ve progressed since entering SFA,” Turcios said.

Allen also was honored by how much trust her managers at the country club showed her.

“They trusted us with all that goes on behind the scenes,” she said. “I loved that the managers understood we were there to learn and experience as much as we could.”

Allen felt “valued and seen” when she was asked to sit in on meetings like a job interview in the kitchen during which the interviewee was presenting five dishes.

The four seniors advise those considering a career in hospitality to keep their minds open to all the possibilities.

“Even though you have a focus, you’re going to learn every single aspect of hospitality in the hospitality administration program,” Norfleet said. “Embrace that because you will make important connections in all those areas, and they determine how far you get in this world. I really see why it all pays off now. You can do so many things with this degree.”