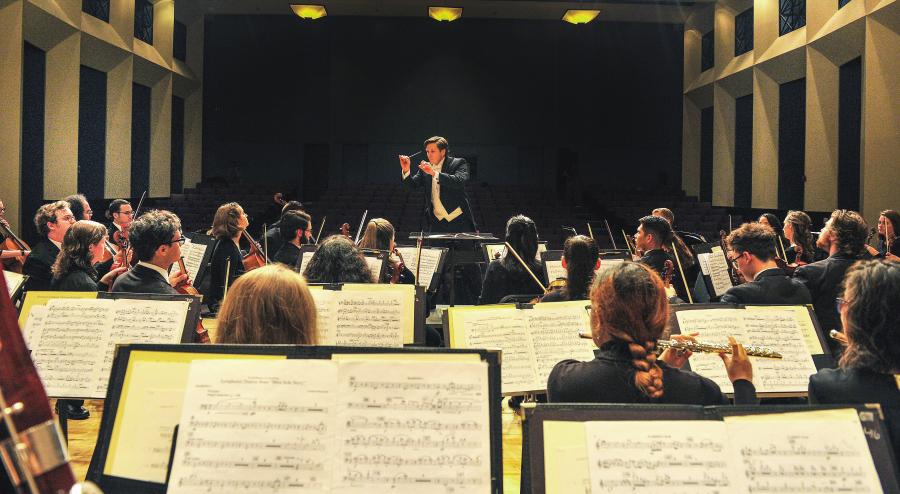 Dr. Gregory Grabowski conducts the SFA Symphony Orchestra in this file photo. The orchestra will perform works by Richard Wagner and Wolfgang Amadeus Mozart in a virtual concert at 7:30 p.m. Tuesday, Sept. 22. To access the live concert free of charge, visit music.sfasu.edu.

The program will feature performances of Richard Wagner’s “Siegfried Idyll” and Wolfgang Amadeus Mozart’s  Symphony No. 36, according to Dr. Gregory Grabowski, director of orchestral activities at SFA and the Symphony Orchestra conductor.

“In general, the program is definitely on the lighter side,” Grabowski said. “Wagner composed the piece as a gift for his wife after their son was born. It was performed on Christmas morning on the stairs of their villa.”

The Mozart symphony, which will close the concert, is subtitled “Linz” and was composed during a stopover on Mozart’s way back home to Vienna from Salzburg.

“The Mozart is a C major symphony, and you can’t get much more joyful than that,” Grabowski added.

To access the live concert free of charge, visit music.sfasu.edu. For additional information, contact the School of Music at (936) 468-4602.