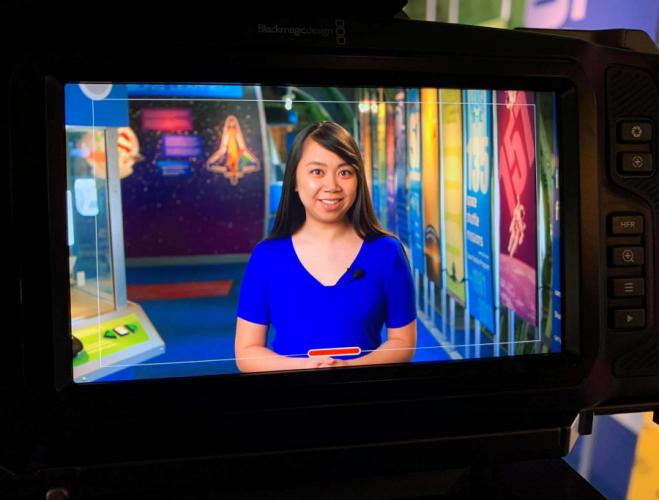 A 2013 graduate in the School of Theatre, Le lives in the Houston area and works as a freelance actor in film, commercials, theatre and voiceover. As host for Explorer Camp TV, Le introduces guests and new segments and occasionally facilitates interviews with educational specialists at Space Center Houston.

She landed the hosting job in the middle of a pandemic as a result of what she described as a “right time, right fit” situation.

“I was already booked for a Space Center Houston commercial that was going to advertise their reopening at the beginning of July,” she said. “Somewhere within that production process, a TV series was pitched and approved. Once they got the ball rolling for it, they contacted my agent to bring me on to Explorer Camp TV.”

The show is dedicated to science and space exploration learning and airs at 11 a.m. Wednesdays on My20 KTXH. Viewers explore rocket science, astronaut food, robotics and more, and they learn what it takes to get into space. They hear from real scientists and engineers, complete hands-on STEM activities, and get news about NASA missions.

Managing an acting career and keeping the momentum going for a lifestyle based on the entertainment industry during a pandemic has been quite the challenge for Le.

“At the beginning of this year, I had a dozen doors I was trying to open at once, with a contingency plan for everything,” she said. “Now, it's hard to predict what any of my next steps might be when the industry is changing and adapting around COVID.

“After quarantine began back in March, I've steadily watched my bookings go on hiatus, get canceled or get reprogrammed for a date on which I can't guarantee my availability,” she added. “At the same time, I'm extremely lucky to book gig work, and so much is ‘COVID-centric,’ with a commercial here about social distancing; an info-video there on a loan for COVID victims; a play-reading about paying rent during quarantine, etc. I never would have predicted to be doing what I'm doing four months ago, and I can't imagine what it'll be like four months from now.”

Le credits her recent success in the bookings arena to her agents at Pastorini-Bosby Talent.

“I do a lot of work on my own, but I'm definitely not a one-woman show,” she said. “Any success I've received has come from my personal hard work but also from the support of people who trust me and build me up.”

View some of Le’s Space Center Houston commercial work at There's Space For Everyone, Experience the History and Reopening July 1st.