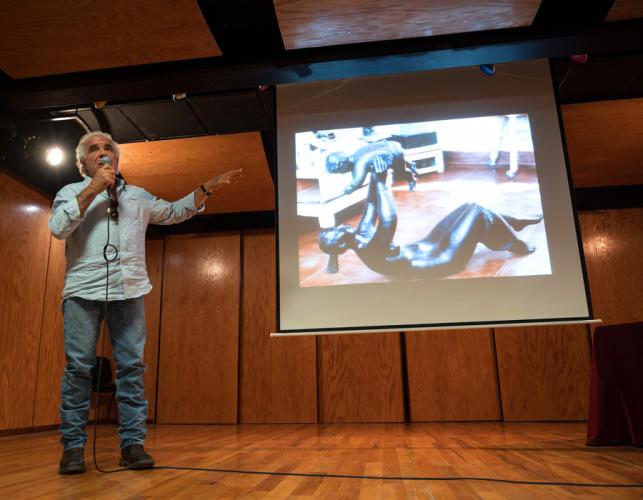 Piero Fenci, professor of art at SFA, lectures at la Universidad Autonoma de Chihuahua about his history with the university and the ceramics program he started there. The background image is a six-foot maquette of a 16-foot bronze sculpture that his father created. It is now displayed in the courtyard of Cedars-Sinai Hospital in Los Angeles. Fenci’s father, Renzo Fenci, came through Ellis Island in 1937. Trained as a sculptor at the Royal Art Institute in Florence, Italy, and with only $12 and no English-speaking skills at the time, he later made a name for himself in the U.S. as a creator of monumental public sculpture and head of the sculpture department at Otis College of Art and Design in Los Angeles. 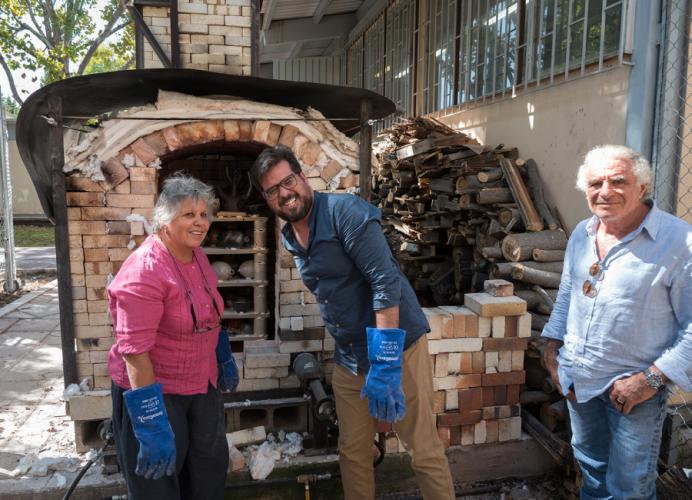 Fenci and his Mexican colleagues prepare to unload a high-fire kiln Fenci and students built at la Universidad Autonoma de Chihuahua. Adan Saenz, center, who is a former student of Fenci’s, is head of the ceramics program at la UACH. 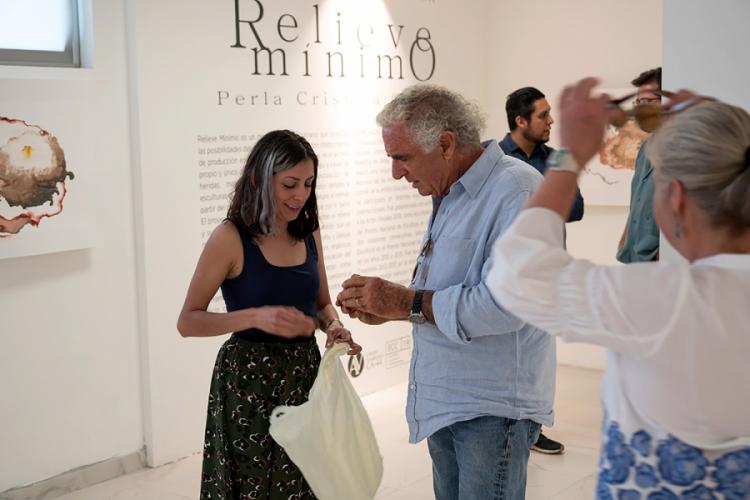 Fenci speaks with Perla Cristina Garcia, a former student of Fenci’s who is now a professor at la UACH, at Garcia’s exhibition opening. 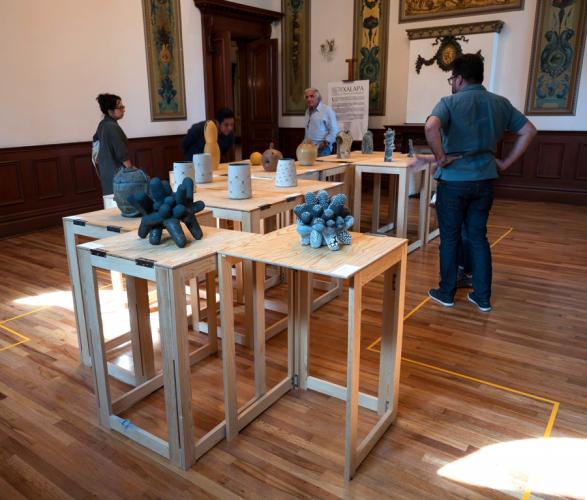 Fenci attended numerous openings of exhibitions of well-known Mexican ceramicists, many of whom studied with Fenci, during the celebration of his 15 years of artistic work at la Universidad Autonoma de Chihuahua


NACOGDOCHES, Texas – As the 2019 fall semester approached, Stephen F. Austin State University art professor Piero Fenci knew it would be a very different yet interesting academic year for him.

He had decided to take a sabbatical from teaching in anticipation of being busy for several months creating ceramic art for a solo exhibition of his work he had been invited to show at Page Bond Gallery in March in conjunction with the National Conference on Education for the  Ceramic Arts in Richmond, Virginia.

The sabbatical from teaching would also allow him to easily travel to Mexico to take part in a celebration of the ceramics program he helped establish at la Universidad Autonoma de Chihuahua some 15 years earlier. He was also anticipating celebrating his 75th birthday with his university colleagues and friends there. Added to that, officials at la Universidad Autonoma de Chihuahua announced plans to celebrate the start of Fenci’s 15th year of work there by hosting an exhibition in Chihuahua City dedicated to his art and the work of the Mexican students who have studied with him at SFA along with their American SFA counterparts.

What he did not know at the time was as a result of his continued work in Mexico over the previous years – teaching, demonstrating, building kilns, and acting as a mentor to the students there – the university planned to surprise him during his annual visit by naming a new ceramic studio building after him.

What he also didn’t know at the time was that the academic year that he was so eagerly anticipating would be marred by a serious personal illness (from which he has recovered), the death of his mother and a worldwide pandemic, which also eventually caused the cancellation of the NCECA conference and the sudden closure his Richmond exhibition, which had just opened the week before.

The past year did indeed prove to be interesting, with its share of accomplishment and disappointment. But as the fall semester of the 2020-21 year approached, with the pandemic still in full force, Fenci began his 46th year of teaching at SFA.

“It’s not like I’m winding down,” Fenci said. If anything, he’s moving forward faster than ever, instructing in-person and virtually and embracing new technologies and innovative ways to teach his students to be successful artists in a very different world than the one that existed just a year ago. Fenci is also in the midst of a three-year endowed professorship, awarded by the College of Fine Arts Dean’s Circle. And, he’s been invited to be the keynote speaker at the Mexican National Ceramic Conference in October.

While COVID-19 has affected his in-person work in Mexico, it cannot stop the legacy started years ago, when in 2004, then-SFA President Tito Guerrero asked Fenci to visit la UACH in an effort to improve academic relationships between Texas/U.S. and Mexico. Fenci’s efforts resulted in the creation of the first university program in contemporary ceramic art in the state of Chihuahua. The relationship has continued to grow, and last year, Chris Talbot, the director of the School of Art, traveled to Chihuahua with Fenci to meet with Dr. Roberto Ransom, the provost at la UACH, to start an official exchange between the two universities which would involve not only graduate students but undergraduate students.

“It took 14 years for this to happen, and I was overjoyed that Chris and Dr. Ransom are so supportive of the idea,” Fenci said. During that visit, he attended the extensive exhibition of his work and that of his students, enjoyed a surprise 75th birthday party in his honor and witnessed the unveiling of a plaque bearing his name on the new studio building at the university.

Because SFA offers an M.F.A. in art, which is the equivalent of a Ph.D, SFA had been a magnet for Mexican students who want the terminal degree in visual art. Just this year, UACH instituted an M.F.A. program. After earning an M.F.A., Mexican students can go on to land a tenure-track job at an American university or earn a high-ranking position at a Mexican university.

Fenci has recruited Mexican graduate students who have gone on to lead top ceramic programs in both Mexico and the U.S.  Adan Saenz is a tenured professor running the program Fenci started at the University of Chihuahua. Kira Enriquez is a tenured professor and head of the ceramics area at Indiana State University in Terra Haute. Gabriela Hijar graduated with her M.F.A. last year and landed a prestigious residency in Mexico City then accepted a position as an adjunct with the promise of landing a tenure-track position at la UACH. Aldo Ornelas, from Chihuahua City, and Erik Ordaz, from Mexico City, earned their M.F.A degrees this past year. Ornelas is a studio assistant for Elizabeth Akamatsu, a Nacogdoches-based sculptor. Ordaz is a full-time adjunct instructor at SFA this fall. Homero Gutierrez, from Chihuahua City, matriculated last semester and is one of Fenci’s graduate assistants this fall.

In addition to featuring his and his students’ exhibitions, the celebration of Fenci’s 15 years of work in Mexico showcased a dozen shows, including work by his former la UACH art students who are ceramicists, painters, drawers and printmakers, in addition to his own exhibit.

Fenci’s dedication to the Mexican students goes beyond the classroom. He has helped them in various ways to feel secure in their relocation in the U.S. and at home at SFA so they may concentrate on their work and studies.

“It is important to explain that the students from Mexico all come from working class families, all of whom I’ve met and know,” he said. “Family is huge in Mexico, so they make it a big deal to have me to dinner to meet everyone – that way they have a personal connection with me and can put their mind at ease when their child comes across the border to study in my program at SFA.”

Fenci’s impact continues to be far-reaching, raising SFA’s profile in the art world and recruiting students. He instituted a visiting artist program in ceramics the year he arrived at SFA, and it has continuously brought internationally known artists to demonstrate for his students, creating a network that has resulted in many of his undergraduate students earning admission to graduate school programs and, likewise, enticing students of the visiting artists to attend SFA.

Although he is the recipient of numerous awards, among them the SFA Foundation Award for Teaching and Research, and the Texas Master Award from the Houston Center of Contemporary Art, which also hosted an exhibition of his artwork, Fenci considers teaching and seeing his students succeed as his greatest accomplishment.

Bringing order out of chaos is a key concept in Fenci’s personal philosophy of art and life, and the pandemic may put that concept to its greatest test. But he’s determined that a pandemic will not dilute his efforts to recruit talented art students from Mexico. As the keynote speaker at the Mexican National Ceramic Conference in October, he will make his presentation via Zoom talking about the importance of the artistic relationship between SFA and Mexico and the “stellar careers in the field both here and south of the border” that have resulted from the collaboration.

“All of my Mexican students who have graduated from the M.F.A. program here will play a part in the conference by speaking about their work and the influence SFA has had on their careers,” he said.