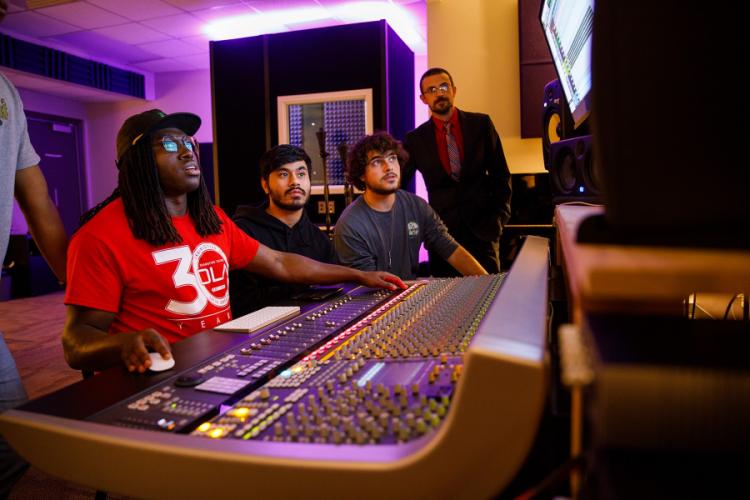 Audinate showcased SFA’s use of Dante in a recent industry article touting the platform’s innovative capabilities. The article has been picked up and distributed by multiple media outlets and read by thousands of industry professionals.

SRT director James Adams, assistant professor in SFA’s School of Music and director of the SRT program, has been integrating Audinate’s Dante across multiple studios and stages on the SFA campus for the past two years. Recruited out of Los Angeles to come to SFA in 2016, Adams said he reconnected in 2018 with West Coast studios he knew there, and that’s when the conversion began.

“I was looking for a high-quality and cost-effective replacement to a piece of audio equipment in our studio,” Adams said. “Through my research and discussions with colleagues in the industry, I became aware of a product that satisfied my then-immediate needs while offering modular expansion abilities for the future: Focusrite Red Net equipment (a Dante enable product). That is how it all began. The Red Net products satisfied our needs at the time and opened up a world of possibilities that we were not aware of. Fast forward to today, and we are continuing to discover new, innovative ways to deliver instruction, operate productions and record music.”

The Audinate article defined Dante as “the de facto standard for digital audio networking, and distributes hundreds of uncompressed, multi-channel digital audio via standard Ethernet networks, with near-zero latency and perfect synchronization.” Dante allows audio, control and all other data to coexist effectively on the same network.

During the campus integration of Dante, Adams not only wanted to enhance university technology, he also wanted to heighten instructional offerings at SFA, a goal that was initially achieved through a large-scale test with one of the university’s major jazz productions.

“The traditional workflow for the performance was your standard front-of-house endeavor,” Adams was quoted in the Audinate article. “It worked, but it wasn’t flexible, and it wouldn’t allow us to get additional technologies or students involved.” By converting to a Dante-backed audio-over-IP system, Adams was able to significantly alter the workflow so multiple students were actively engaging with the production – allowing for more hands-on educational components and a more robust digital production, the article explained.

In addition to the publicity being a feather in SRT’s cap, the article is proving to be a great recruiting tool, said Adams, who has recently become a Dante Certification Instructor. Beginning in the spring, SRT will incorporate Dante certification into the curriculum and will begin certifying students. Knowing how to incorporate Dante capabilities into studios will give SFA SRT graduates an edge in the job market, Adams added.

“Students already learn Dante to operate our studio, and now we will be able to get them formal certifications,” Adams said. “With this, students’ employment qualifications in our industry are further elevated. I hope that they can see our level of dedication to overcoming traditional technological barriers to deliver an elevated educational experience.”

Student response to Dante has been enthusiastic, according to Adams.

“They think it is magic, and to be honest, it is,” he said. “Proper operation of the technology requires specialized training. Once students make it over the initial phase of intimidation  – there are a lot of buttons and it can be overwhelming when first wrapping your head around it  – they all have the ‘Ah Ha!’ moment.”

The Audinate article further demonstrates to prospective employers that SFA's SRT program is at the forefront of recording arts technology and education.

“Knowledge of networked audio is growing in demand among employers in the music and production industries,” Adams said. “If potential employers read this article, they will learn that our students are gaining very advanced, in-depth experience with Dante operations and music production.”

“This technology is being adopted throughout the music industry because of its cost efficiency, reliability, and flexible, ease of use,” he added. “Our students are being trained in the operations of Dante and similar technologies which further expands their marketable skills.”

For more information about the Sound Recording Technology program at SFA, contact Adams at adamsjf@sfasu.edu.