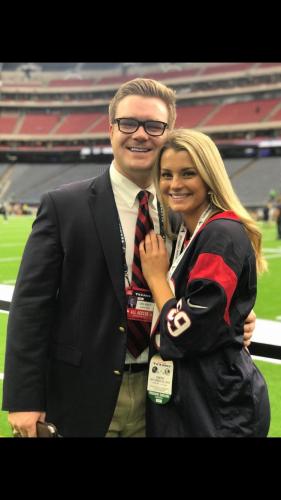 Chris Bentley of the Houston Texans. 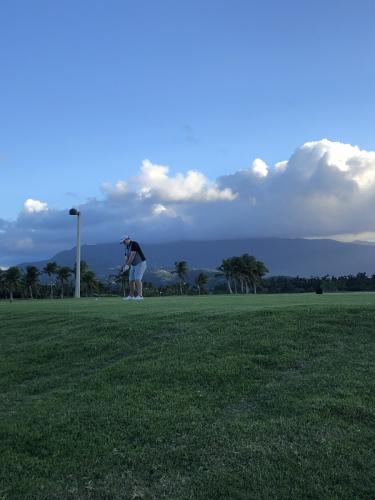 Blake Stock teeing off at a golf course in Puerto Rico. 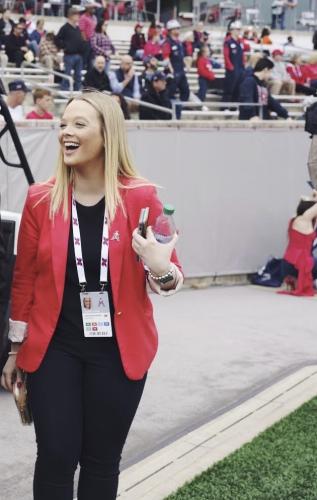 
Editor's Note: After this article was written, Sloane Evans lost her job with the XFL's Houston Roughnecks because the league folded due to COVID-19. Evans has since accepted the position of Director of Corporate Partnerships with the Houston SaberCats of Major League Rugby.

The sports business program in the Rusche College of Business is one of the newest in the college, but it's also among the largest. With more than 30 graduates in the workplace and high placement rates, including those at professional and collegiate organizations across the state, the growing department is now at about 240 students.

Students have to complete all of the business foundation courses. This includes the basics of accounting, finance, management, marketing, economics, business law, and business communication, just like any other business major. Then they take courses such as sports analytics, sports marketing, sports economics, sports and entertainment law, sports sales/ promotion, and a required internship.

Offered as both a major and a minor, the program is the fourth largest in the business college and is led by Dr. Jason Reese, sports business director and associate professor at SFA.

"When looking for schools, high school students are recognizing the need for a business degree in sports," Reese said. "Being that we are unique to have a sports business program in an AACSB college of business, students are attracted to our program. At the end of the day, sports organizations, whether they are professional, college, youth or a nonprofit, they all are businesses. These organizations need highly trained graduates who know the sports industry."

Since the program admitted its first students in spring 2016, its graduates and their careers are newly minted. But if the early results are any indication, the major is here to stay.

Sloane Evans '17 and '19 is corporate partnerships activation manager for the Houston Roughnecks of the newly formed XFL. She works with a sprawling array of sponsored assets ­– radio, signage, video boards, in-game promotions, marketing in and out of the stadium, print, social media, website, email, giveaways, events, player appearances, tickets and suites. The laundry list comes with hard deadlines that keep her hopping.

And the Katy native says she couldn't be happier. Evans finished her MBA in fall 2019, and two weeks later was working for the team. Just two weeks after landing the job, the team had its first home game. Stress. Pandemonium. Drinking water through a firehose.

Evans wasn't an athlete in high school or college, but grew up watching sports. Beyond the actual games and matches, Evans said she developed an interest in what was going on behind the scenes, the business side of the industry. She'd originally wanted to be a sports agent, hence her early plan to earn a law degree instead of an MBA. But during her undergraduate years, the plan changed. And that was due to the sports business major's internship requirement, which for Evans meant a stint with collegiate athletics promotions company Learfield IMG College. The experience was a watershed.

"I realized I loved working in corporate partnerships," she said.

Another important part of her undergraduate studies was the sports promotion course, where she found her love of sports sales and sponsorships. She realized she wanted to work on a bigger stage than college. Professional sports in a big city was where she wanted to be. Conveniently, hometown Houston had it all – family, friends and a professional franchise.

"I'm obsessed with football," she said. "I am going to stay in it for as long as I can."

Evans' classmate, professional golfer Blake Stock '18, is currently living in North Texas and is on the All-Pro tour. He hopes to eventually make it to the Korn Ferry level, the stepping stone to the PGA. He's giving himself two years. If he makes Korn Ferry, he'll remain on tour and continue chasing his shot at the PGA. If not, the Waco native will transition to life as a former professional athlete.

Stock, who played on the SFA men's golf team from 2016 to 2018, is not yet sharing tee times with major winners, but he's a touring professional athlete, and there's something to be said for that. Part of his success is due to his education in the sports business program. He knows how to develop a business plan and pitch it to sponsors and investors. Without funding, the actual golf part of the equation is impossible.

"I'm still playing, so it's working out," he said.

During his college days, Stock remembers making cold calls, at Reese's recommendation, for SFA athletics, trying to sell tickets to football and basketball games. He didn't enjoy doing it at the time ­– picking up the phone and calling strangers – but in retrospect, it was a good experience. To understand sports, you have to understand what goes into it off the field.

If Stock doesn't wind up hoisting the Wanamaker Trophy, he'll have plenty of fond memories of competing in picturesque places like Puerto Rico, Florida and Southern California. When it comes time to get a "real job," he'd like to work either as a marketing rep for a professional sports team or in the PGA's front office. The organization is moving its headquarters from Florida to Frisco, Texas, just a few miles down the road from where Stock lives. If he heads the PGA's way for a job, Stock is hoping the sports business degree will give him a leg up.

"There's not many schools that offer that degree," he said.

As Stock tries to make it to his sport's top tier, Chris Bentley '18 is in year two as a ticket sales associate with the NFL's Houston Texans. He handles high-end products – season tickets, hospitality packages and suites. The work is tough. Sales usually is. But when it comes to asking people to spend money, he's no rookie.

Back in 2018, when Bentley was a senior at SFA, Reese encouraged him to sell tickets to the Battle of the Piney Woods between SFA and Sam Houston State. Since the football game was played two hours away from campus at NRG Stadium in Houston, and since SFA was on a seven-game losing streak at the time, tickets weren't necessarily the easiest thing to sell. But that's what Bentley liked about the job. It wasn't easy.

"That set the stage for my position with the Texans," he said. "There's no question it's a grind, but you have to keep on keeping on – I cannot be afraid of the word 'No.'"

While a student at North Carolina State University, and not really sure of what he wanted to do, a family member on his father's side told Bentley about the SFA sports business program. It sounded intriguing, so he made a quick decision.

"I packed my bags and headed to Nacogdoches," Bentley said.

His ultimate goal is to be a Division 1 athletic director. But for now and into the foreseeable future, he said there's absolutely nothing wrong with selling tickets for the Texans.