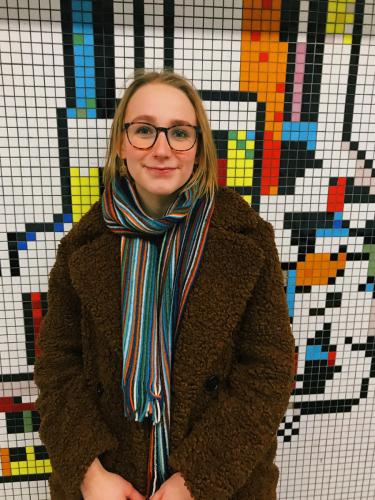 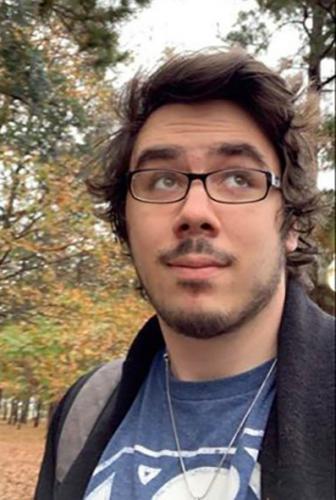 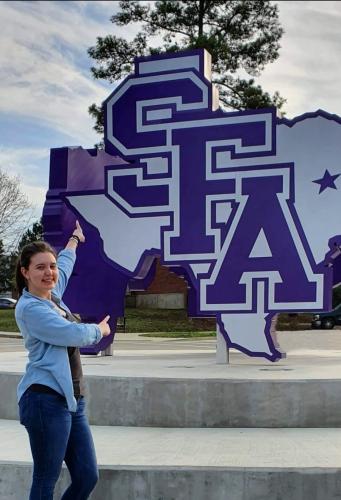 
NACOGDOCHES, Texas – Finishing spring semester 2020 studies, which have been online, in the midst of a worldwide pandemic would be stressful for any college student. But imagine yourself as a fine arts student who had chosen this academic year to study abroad.

Separated from family, friends and familiar surroundings, students involved in an ongoing exchange between Stephen F. Austin State University and Rose Bruford College in the United Kingdom have an added set of challenges that comes with being thousands of miles from support systems at home amid overwhelming fear of the unknown.

The relationship between SFA and Rose Bruford, the leading professional theatre school in the university sector in England, extends more than 25 years. SFA theatre students who spend a year at Rose Bruford have the opportunity to study in Sidcup, Kent, which is just outside of London, Spain, Estonia, Prague and other parts of Europe. Similarly, Rose Bruford students who come to SFA can fulfill American Theatre Arts program requirements here.

“My studies at Rose Bruford are continuing, but they are the least of my worries during all of this,” she said. “It’s been really hard to motivate myself to be invested in the modules left to finish in the midst of this uncertainty.”

Barnes describes these past few months as “lonely, more than anything.”

“It’s hard to go from going to the college every day and being able to see friends, to rarely seeing, let alone interacting with, another person,” he said. “Most days I can keep myself busy by finding online resources that help me continue to learn about things I’m interested in. But some days, I just lie in bed and watch Netflix or Disney Plus.”

The United Kingdom government began its lockdown on March 23, but due to Barnes’ own health conditions, his doctors had already told him to stay home the week before.

“So I’ve been at home for about eight weeks now,” he said. “This fell in line with Rose Bruford’s Easter break, so, luckily, the faculty and staff here had about a month to prepare and make the switch to online where possible.”

From about December to February, Beck was on break and free from classes. In February, her coursework sent her to the Academy of Performing Arts in Prague to do an Erasmus (EuRopean Community Action Scheme for the Mobility of University Students) program and study at DAMU (Academy of Performing Arts) until May. But after only a month of being there, the pandemic forced her to return to England.

“My roommates in London all went back home and I was left alone, so a friend is letting me live with them and their family for the remainder of my stay,” she said. “I’m currently still finishing an Erasmus Project from Prague as well as starting a design module at Rose Bruford. During this time, I’ve had the opportunity to spend my time learning more about my personal interests when I’m not ‘in class.’”

Rose Bruford theatre student Ruth Saunders, who had begun her studies at SFA only in January, returned home immediately following spring break as a result of the pandemic. Arriving in Texas on Jan. 6, Saunders said she met “amazing people” who helped her move in and navigate the campus. In the two months that followed, she enjoyed exploring a new culture, meeting new people and taking theatre courses at SFA.

“We got to midterms, and I was so excited to continue the semester while looking forward to spring break,” Saunders said. “I went away on a trip to Eagle Rock Loop and enjoyed every minute.”

“My 21st birthday was the 15th of March, and then I was on a plane home on the 16th of March,” she said. “While a complete shock, I was so thankful to my friends who helped me to get packed up and were so understanding. After a week or so, I figured out how best to work from the U.K. while juggling work from Bruford, too.”

Beck said she’s concerned she won’t be able to return home when she is ready, or that something will happen to her family while she is so far away. She is challenged by “knowing, once I do come back home, it won’t be the same place anymore, and I will no longer be able to enjoy all the things I’ve missed over this year.”

“My greatest fear has been around my flight home,” Barnes said. “The airline I am using is only giving updates about a month in advance for flights, so I won’t get any information on whether or not my flight home will be on schedule for another month or so. At the moment, I’m finishing up my finals at Bruford, and then I plan to fly back home to Texas in July to take online classes for Summer II at SFA so I can have an easier last semester before I graduate in December.”

Upon returning to the U.K. and juggling the demands of online classes, Saunders has found it difficult to stay in contact with her new SFA friends. “Working online was difficult, but that wasn't the hardest thing,” she said. “I was so challenged in not seeing my friends who I had spent the last two months getting to know.” She hopes to return to Texas in the next year or two.

Like most of the world today, Beck isn’t sure what the future holds for her academically and professionally.

“Our directing project, which was supposed to be over at the end of June, is now possibly being pushed into July or August, if we can meet in person by then,” she said. “I’ll either be coming home in June or August based on this decision. Until then, I’ll be spending my days reading, listening to podcasts, exercising and studying.”

Amid all the challenges and uncertainties, the students said there are some valuable lessons to be learned. Saunders said she cherishes the short time she was at SFA, the new friends she met and what she learned about theatre in different parts of the world … “seeing how the same industry can look so similar, yet be different.”

“For me, the most valuable lesson has been to make the most of each day you’re able to go to class, be with friends and family, or even take a trip to the store,” Barnes said, “because you never know when all of that may just go away.”

“I’ve acquired a whole new perspective on society, the government and the lengths – or lack thereof – that humans will go to keep each other safe,” Beck said. “This experience has been one of personal growth.”