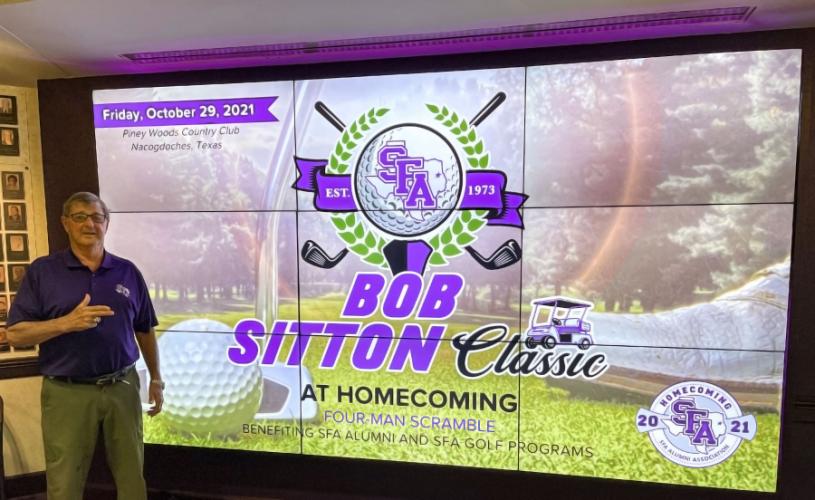 Bob Sitton ’60, the longtime Stephen F. Austin State University Alumni Association director, is being honored with a golf tournament in his name, the Bob Sitton Classic at Homecoming.


NACOGDOCHES, Texas — Bob Sitton ’60, the longtime Stephen F. Austin State University Alumni Association director who helped endow hundreds of scholarships that generated millions of dollars, is being honored with a golf tournament in his name.

Sitton, who led the association from 1972 to 1998, will be the namesake of the Bob Sitton Classic at Homecoming, the annual golf tournament at Piney Woods Country Club. The alumni association approved the name change for the event formerly known as the Annual SFA Alumni Homecoming Golf Tournament.

Sitton – who after retirement remained a fixture on campus as a part-time employee and who in full retirement still visits campus regularly – was inducted into the SFA Alumni Hall of Fame in 2015, having been nominated by at least seven people. He also was the first recipient of the SFA Lifetime Achievement Award, among numerous other accolades and achievements.

“This is a nice nod to Bob and his years of service to SFA,” said Craig Turnage ’00 and ’05, the alumni association’s executive director. “He bleeds purple and loves golf. We wanted to bring it all together.”

A Cushing native, Sitton grew up on a farm with no electricity or running water. Early on during college, he had to return home to milk cows. After earning his degree in health and physical education, he coached high school football, with stints at Cushing High School, C.E. King High School in Houston, and Klein High School in Spring.

Sitton was told about the renaming of the golf tournament by Derek Snyder ’01, director of alumni relations.

“He was truly speechless, and he doesn’t get that way often,” Snyder said. “He told me, ‘I’m honored and have always felt that I had the best job on campus. The people – the alumni of SFA that I have met and the friends I have made – are truly priceless!”’

In addition to the golf tournament, the Bob Sitton Head Men’s Basketball Coach Office at William R. Johnson Coliseum is being named after the hall-of-famer. The Board of Regents approved the name change last year at the behest of Ron Kesterson ’76, who served on the Alumni Association and Alumni Foundation boards from 1991 to 2001.

The Bob Sitton Classic takes place on Oct. 29 at Piney Woods Country Club at 3001 U.S. Highway 59 South in Nacogdoches and will feature food trucks, a bourbon tasting and a mobile cigar lounge. The deadline for registration is Oct. 20. For more details visit the Bob Sitton Classic at Homecoming.