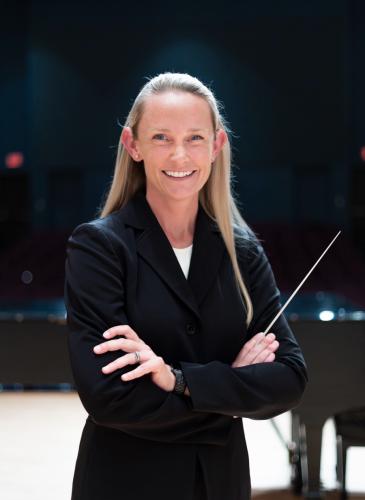 Anglley will succeed Dr. David Campo following his announced retirement effective June 30 following this year’s summer band camps at SFA. Anglley said she is looking forward to “continuing the legacy and great reputation of the SFA School of Music and band program.”

“We are known throughout the state for our outstanding artist educators, and I look forward to continuing to contribute to this, albeit in a new role,” she said. “I am also excited about conducting our Wind Ensemble, continuing to build the ensemble’s résumé through regional, national and international performances, and showcasing the tremendous musicians we have here in the SFA School of Music.”

“I am thrilled that Dr. Anglley has been named as the new director of bands in the SFA School of Music,” said Dr. Nathan Nabb, interim director of the School of Music. “She is admired by her colleagues and students alike for her musicianship, her dedication to our students, and her willingness to perform various service roles at the school, college and university levels. She is a marvelous colleague, and I am looking forward to seeing how she builds on our strong wind band traditions here in the School of Music.”

Anglley said some of her most memorable moments so far at SFA have been of traveling with the Lumberjack Marching Band to perform in London, New York and Ireland.

“Many of our students never travel out of the state, much less the country, and getting to experience those trips with them was very rewarding,” she said. “More than 700 students have had these transformative experiences because of the dedication of our faculty and administration, and I hope we can continue this for many more generations of band members.”

Prior to coming to SFA, Anglley was director of bands at Morningside College in Sioux City, Iowa, where she oversaw the winds/brass/percussion department including concert, athletic and jazz bands and all instrumental music education courses. From 2006 to 2009, Anglley was a doctoral conducting teaching assistant at Texas Tech University where she studied with Dr. Sarah McKoin. While at Texas Tech, Anglley worked with the four university bands including the Goin’ Band from Raiderland and the basketball pep bands. She was also awarded the Outstanding Graduate Teaching Assistant award for the School of Music in 2009. From 2003 to 2006, she was associate director of bands at Cooper High School in Abilene where she conducted the second and fourth bands and taught at the two feeder middle schools. Anglley is an active honor band conductor and band clinician throughout Texas, Oklahoma, Colorado, Iowa, Nebraska and South Dakota.

Anglley’s newest appointment comes as she completes a decade of teaching at SFA.

“Being at the end of my 10th year at SFA, it is obvious that I love my students, my colleagues and SFA,” she said. “Our students here are very special – kind, respectful, and people I simply love to be around. They are what makes SFA home.

“I also have the best colleagues who are not only outstanding musicians, but also just great people who always make me feel supported,” she added. “I count myself lucky to get to continue to work with them.”