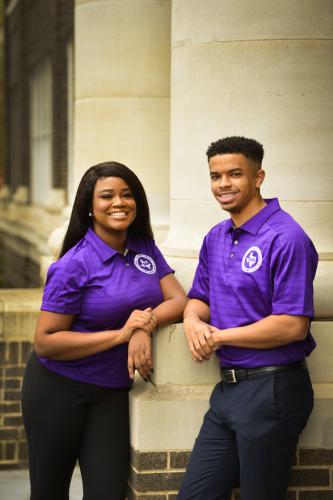 Bre'Anna Locke, left, and Chris Moore, are vice president and president, respectively, of the SFA Student Government Association for the 2020-2021 academic year. Both are students in the Rusche College of Business.


Both the president and the vice president of the Student Government Association for the 2020-2021 academic year are students in the Rusche College of Business. Chris Moore and Bre'Anna Locke are in office for their last year on campus, as both are expected to graduate in May.

While the pandemic shut down campus last spring, the summer and fall saw a noticeable uptick in activity. Moore, a sports business major, worked on a team of faculty and staff members to develop operational standards for COVID-19, a process that is still ongoing in light of challenges that could emerge in 2021. Moore also served on the search committee for the replacement for the vice president of University Affairs, Dr. Steven Westbrook, who retired in December. Between the two initiatives, Moore said he met a wide array of university staff, administrators and professors.

His mantra is "speak it into existence," which he hopes will parlay into a productive future.

Moore, 21, is already studying for the LSAT, the entrance exam for law students, but plans on taking a year off before heading back to school. Any future academic plans would likely include a historically black college or university, either Southern University in Baton Rouge, Howard University in Washington, D.C. or the Thurgood Marshall School of Law at Texas Southern University in Houston. Moore is a member and former vice president of the Kappa Alpha Psi fraternity. His other accomplishments include an internship with the sports marketing department, being named National Pan-Hellenic Man of the Year, and being CPR and automated external defibrillator certified.

"I'm really proud of Chris and Bre'Anna for taking on these crucial leadership roles and for being so successful in these positions," said Dr. Tim Bisping, dean of the business college. "Our business students work hard at building leadership skills, and our faculty and staff are devoted to helping them develop in this way. When I first heard that both the President and Vice President of SGA were business majors, I was so excited to see more evidence that our students are not only developing leadership skills, but are putting them to great use."

Vice president Locke became interested in student government her junior year. The involvement has paid off.

"I've honed my leadership skills and my public speaking has improved," she said.

Locke, from Dallas, is wrapping up her five-year Bachelor of Business Administration/Master of Professional Accountancy program. She is probably headed back to Dallas, where she hopes to go into audit and work for one of the Big Four accounting firms – Deloitte, PwC, Ernst and Young, and KPMG – or a medium-sized firm.

Locke has made the President's Dean List for five semesters, has been a member of business honor society Beta Gamma Sigma since 2016, has a 3.75 graduate GPA, and has participated in voter registration drives since 2018.