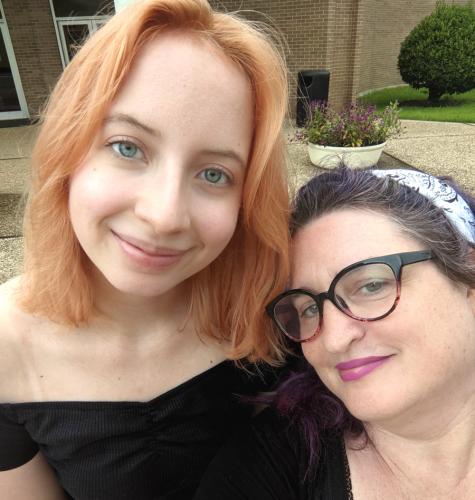 Caitlyn Kirchman, left, Nacogdoches junior theatre student at SFA, will be a director at this year’s Junior Jacks theatre camp. She discovered her love of theatre as a Junior Jacks camper when she was an elementary student and participating in the new camp created by CC Conn, right, professor of theatre.


NACOGDOCHES, Texas – Caitlyn Kirchman was a shy second grader when she first came to Junior Jacks theatre camp on the Stephen F. Austin State University campus. It was there that she discovered a love for theatre and performing that helped her overcome her shyness and develop friendships that continue to this day.

Her positive experiences over subsequent years as a Junior Jacks camper and in the theatre program at Nacogdoches High School influenced Caitlyn’s decision to come to SFA to major in theatre with an emphasis in teacher certification. This summer, the Nacogdoches junior theatre student will come full circle with Junior Jacks to become one of its directors.

“I'm excited to be able to help children discover a love for theatre in a program that inspired me,” she said.

Junior Jacks is a two-week, half-day theatre camp for children entering third through ninth grades. It began in 2009 as a partnership between Unity Church of Christianity and the School of Theatre to offer service learning for theatre teacher certification students and as a community outreach throughout East Texas. In the first 12 years of the program, Junior Jacks has served approximately 230 individual children representing all Nacogdoches County as well as some surrounding counties. The program even managed to continue through the pandemic and offered a virtual (online) camp in summer of 2020. Children participate in theatre activities, read and rehearse a script, memorize and work on character role and perform for their families at the end of the camp.

The School of Theatre will offer both in-person and online options for the Junior Jacks theatre camp planned for Aug. 2 through 6 and Aug. 9 through 13. Registration information and pricing can be accessed at theatre.sfasu.edu/programs.php.

The goal of Junior Jacks is two-fold, according to Conn.

“First, it is an activity that combines entertainment and learning for children,” she said. “Participants have two weeks of activities that build their reading, speaking and communication skills, and the camp culminates in a project of which they are all very proud and get to share with the community.

“Second, it provides an opportunity for the SFA teacher certification students to direct a younger set of children than their typical student teaching appointments offer,” she added. “For students who will get certified to teach kindergarten through 12th grades,  it’s imperative that they get the opportunity to work with these younger ages.”

Some of Kirchman’s fondest memories of Junior Jacks revolve around the “sense of community” that was created through campers’ interaction with each other.

“When I was younger, I was super shy and had a hard time making friends,” she said. “This program helped me find something in common with others. We were able to bond over theatre. Performing alongside my friends and feeling proud of them and myself was one of my favorite feelings. I loved cheering on my peers. Even today, I get emotional during curtain calls, whether I'm participating in them or not. I've teared up during many of them, knowing how hard everyone has worked to create a show.”

Kirchman participated in UIL One-Act play competition as a middle school student and continued to perform on stage as a student at Nacogdoches High School. She credits NHS theatre teacher Victoria Perry as inspiring her to follow her passion and turn it into a career.

“Whenever I first got to direct at SFA, it truly felt like I was doing what I was meant to do,” Kirchman said. “I really love being able to take words from a script and put it onto the stage for everyone to enjoy. I'll be directing children for the first time in Junior Jacks, which makes me a little nervous, since it will be different from directing people my age. But I have the help of my wonderful partner and friend Johana Lenington to co-direct with me.

“I've been interested in getting involved in children's theatre or high school theatre once I become a teacher, so this will be a great opportunity to experience teaching elementary children,” she said. “I'm excited to be able to help children discover a love for theatre by working in a program that inspired me.”

Junior Jacks helped Kirchman to discover her passion for theatre, and as a Junior Jacks director this summer, she is excited to do the same for the upcoming group of camp participants.

“Theatre is what led me to make the most amazing friends and participate in the most fulfilling opportunities,” she said. “I hope to be able to spark the same joy for theatre in others with this opportunity.”

Having the opportunity to watch Kirchman grow as a performer through the years and then to see her come to SFA as a theatre student has been especially rewarding for Conn.

“I am over the moon to have completed this cycle with Caitlyn,” Conn said. “She was this adorable little second grader when I first created the program (adjusted to 3rd grade later), and to have seen her grow through the years and then come to SFA to be a theatre student has been amazing.”

Conn watched Kirchman from a distance as she excelled in theatre at NHS under the guidance of Perry, who is also an SFA School of Theatre graduate. Kirchman’s younger brother is now in Junior Jacks.

“When Caitlyn told me that she was directing this summer, it felt very rewarding to see this full-circle moment,” Conn said. “I am proud of what Junior Jacks has meant to the community and to the student teachers, and I hope it continues to build even bigger participation and support in the future.”

Contact Conn at conncs@sfasu.edu for additional information. The School of Theatre may be reached at (936) 468-4003.