Himes retiring as dean of SFA College of Fine Arts 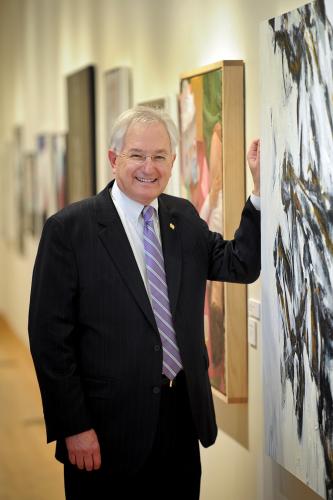 
NACOGDOCHES,  Texas – Dr. A.C. “Buddy” Himes, dean of the College of Fine Arts at Stephen F. Austin State University, will retire effective May 31 after 47 years of service in both secondary and higher education.

In notifying the dean’s staff and fine arts faculty members last fall of his intended retirement, Himes wrote: “I am grateful to Stephen F. Austin State University for allowing me the honor and privilege to serve as dean of the College of Fine Arts for the past 14 years. I feel that coming together in unity, the university, the faculty and staff, and the community have allowed the college to be taken to the next level multiple times over.

“Reflecting upon my career it is obvious (to me) that every challenge has been met, every goal accomplished, every expectation exceeded, and every vision realized,” he said. “And, now, after 47 years in the profession, this is clearly the ideal time for me to retire.”

“The leadership he has provided will continue to impact SFA students for years to come, and we are grateful for his accomplishments as dean,” Gordon said. “Dr. Himes has been an asset to our campus and the Nacogdoches community, and we wish him all the best in his retirement.”

Himes came to SFA to serve as the fine arts dean in 2007, moving from the University of Louisiana at Lafayette where he was director of the School of Music and head of the Department of Performing Arts in the College of the Arts. There, he was recognized for his oversight of a construction project, doubling the fine arts endowment base, producing a community-based organization dedicated to enhancing scholarships, and attracting nearly $1 million in grants.

Following the same pattern for success, Himes has guided the schools of art, music and theatre at SFA to higher levels of achievement during his 14-year leadership.

Perhaps his greatest accomplishment at SFA is currently being realized and taking shape today before the public eye, its daily evolution apparent at the corner of North Street and East College Street. In 2015, Himes released “The Transformative 2020 Vision,” a five-year plan for a multi-million-dollar project designed to “transform the College of Fine Arts into the best fine arts program in Texas.” The plan led to the approval by the SFA Board of Regents for the $50-million renovation and expansion of the Griffith Fine Arts Building currently underway. Funding was obtained through the issuance of bonds in 2019, and proceeds must be used, in accordance with the bond documents, for construction, renovation and other project-related purposes.

More than two decades in the making, the $50-million Fine Arts Expansion Initiative will include complete renovations to the existing Griffith Fine Arts Building and add accessible parking, a patron drop-off zone (off East College Street) and new construction which will extend the building along North Street nearly to the corner of East College Street. The renovated and expanded state-of-the-art building will include two dance studios, two theatres, an auditorium, recording studio, sound stage, audio and video editing rooms, an art gallery, multiple classrooms, rehearsal facilities, faculty offices and the offices of the dean. The facilities will house the CFA’s sound recording technology, filmmaking, theatre, dance and musical theatre programs.

Following his arrival at SFA, Himes in 2008 established the Dean’s Circle, an external support organization of community members dedicated, in part, to nurturing potential young artists within the College of Fine Arts. The Dean’s Awards include monetary rewards to students to further their educational pursuits. Since 2008, the Dean’s Circle has presented $174,000 in student awards. Additionally, the organization established the first-ever community-established endowed professorship at SFA in 2016.

Himes was instrumental in establishing the Sound Recording Technology program within the School of Music. “I can trace this program back to April of 2007 when I came to interview,” he said. “It began as nothing more than what was known to be a good idea, and a whole lot of faith – no curriculum, no facilities, no equipment and no students. Today, the SRT program is certainly the fastest growing program in the School of Music, and is one of, if not the, fastest growing programs at the entire university.”

Among his other SFA accomplishments are involvement in the restoration of SFA’s bell carillon, creation of three endowed professorships, a permanent endowment for the College of Fine Arts’ generation of $125,000 in unrestricted monies annually, a 23% increase in enrollment within the college, successful advocacy for the new $50-million fine arts expansion underway, construction of 16 new music practice rooms, involvement in the production of the Nacogdoches 1938 documentary film project, and bringing the dance program into the College of Fine Arts.

Throughout his career, Himes has been a sought-after conference presenter and panelist. He is a published author on topics of administrative leadership and teaching effectiveness, and he has served in leadership roles in academic organizations at the national and international levels.

Himes has served his community through active engagement in the Rotary Club, was a founding member of the Nacogdoches Film Festival, and is a member of First United Methodist Church, where he actively engaged in the pipe organ restoration project.

After graduation from college in 1973, Himes began his career as a high school band director in Bluefield, West Virginia.

Himes and his wife, Cindy, plan to stay active in the Nacogdoches community and enjoy their children and grandchildren.