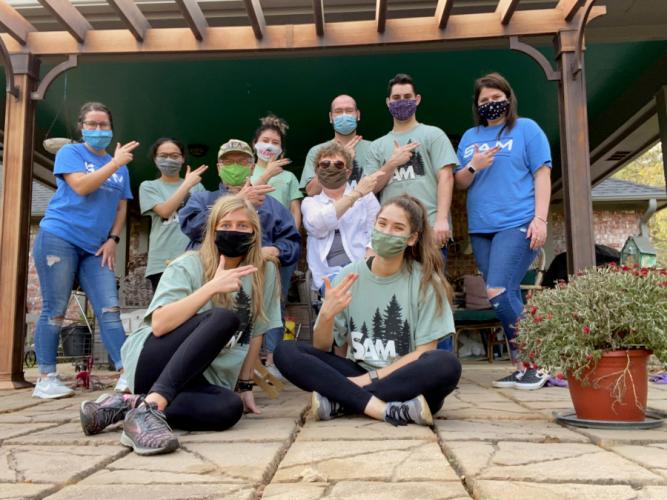 
When Sharron and Roy Alston came to Nacogdoches in 1968, the azaleas and the dogwoods were in bloom, and Roy, a doctorate in math in need of a job, was offered a position in the SFA math department. All of it was just too much to turn down.

Four decades later, in 2008, Roy retired. He and Sharron, the parents of two sons, live out on four acres north of town. Life is good. But it's also catching up with them. What used to be easy isn't easy anymore, especially when it comes to keeping up with a big piece of land.

So, around three years ago while at an SFA basketball game, they applied for a service request through The Big Event, a Student Affairs community service program. The request was granted, and since that time, Rusche College of Business students with the Society for Advancement of Management (SAM) have headed out to the Alston home a few times each year for gardening and heavy yard work.

"We can do things, but we can't do them for long," Sharron said. "It's been a great help."

The service, of course, is also social.

"We love visiting with the kids and hearing about what they're going to do after they graduate," Sharron said.

One of the students the Alstons have met is management major and SAM president Daniel Rowland, whose future looks all but assured. Set to graduate in May, he already has a job offer from, among others, McLane Company, a wholesale supply chain subsidiary of Berkshire Hathaway. As he heads to the big leagues, he'll bring a bit of humility with him, something he learned in part by pruning trees, moving boulders, breaking up concrete, and painting patio furniture out at the Alston property.

"It makes you think about how you can help others," he said of his service. "It will carry on in my career. I think it's vital for leadership."

Rowland started out at James Madison University. But things didn't work out in Virginia so he returned to Texas, where he worked for three years at Chick-fil-A. He rose to the position of production director at the Spring location, which at the time was ringing up more than $7 million a year in revenue. The experience gave Rowland a good taste of leadership and teamwork in a high-pressure environment. But without a degree, he was likely at a dead end.

He went back to college in 2018, the second time around at SFA with his sights set on a business degree. He was tutoring at the Academic Assistance and Resource Center when he met fellow tutor Mikala Groshong, then a management undergrad who, recognizing Rowland's experience at Chick-fil-A, convinced him to join SAM.

"Daniel had a lot of real-world management experience, as well as strong leadership traits," Groshong said. "There was no doubt in my mind that Daniel would be a fantastic president for SAM."

Since 2017, under the stewardship Groshong and Rowland, SFA's SAM team has racked up several first- and second-place finishes at the organization's annual national conference.

Now a graduate student in the Schlief School of Accountancy, Groshong's years with AARC and SAM are behind her. With graduation looming, she is busy with class and looking for the right place to start her career. Like Rowland, she'll carry a piece of the Alstons in her heart as she leaves for the business world.

"I gained family from doing community service for the Alstons," she said. "They welcome you right into the family and tell stories about how they met and fell in love, their kids and grandkids, and so much more. They take a personal interest in getting to know everyone who visits them."