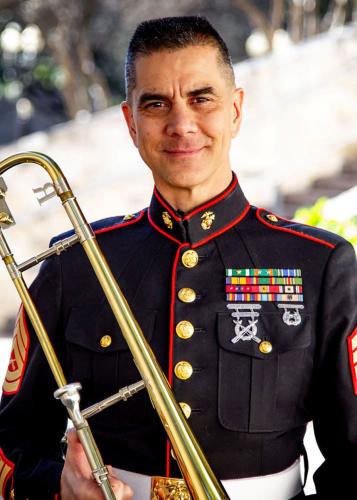 “Ebo will join the Axes on several jazz band standards and finish with a bebop feature for all the trombones in the band that Ebo composed called ‘Trombonius Rex,’” Scott said.

The Swingin’ Axes will also perform a brand new composition by Gabe Musella that honors the memory of Scott’s former jazz band director and close friend Alan Shinn called “Here’s to You, Big Al.” They will also perform a hard-driving shuffle called “In a Big Way” by Dan Gailey and a fun, fast waltz by Chris Culver called “Berglike.”

Ebo is the former head of the Instrumental Division at the Naval School of Music in Virginia Beach where he also served as trombone faculty member and jazz improvisation instructor. He is an active clinician, educator and performer and holds degrees from Indiana University and the University of South Carolina. He has played with numerous artists in both military and civilian settings, including Natalie Cole, Frank Sinatra Jr., Johnny Mathis, Jon Faddis, Michael Mossman, and Tim Akers and the Smoking Section.

Ebo is a recipient of the Musician of the Year Award for the U.S. Marine Corps and has performed nationwide as the musical director and lead trombonist for the Marine Corps Jazz Orchestra. His compositions and arrangements have been featured as part of USMC national recruiting efforts and have been performed by numerous ensembles.