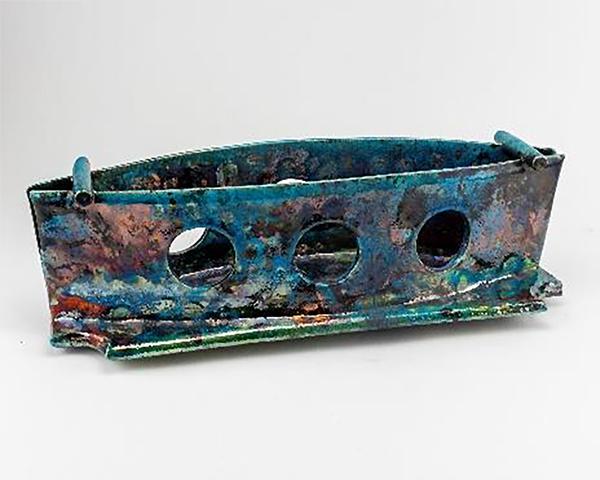 SFA ceramics professor Piero Fenci’s “barge,” low fire ceramic, 2021, is among works to be exhibited in the Emerging Artists and Their Mentors Show of the Clay Arts Museum and Education Organization of Houston opening Aug. 30 at the College of the Mainland.

Fenci and students Homero Gutierrez, who is an SFA Master of Fine Art in ceramics candidate from la Universidad Autonoma De Chihuahua, Mexico, and Nic Gagne, a senior SFA ceramics major from Visalia, California, will exhibit works in the Emerging Artists and Their Mentors Show of the Clay Arts Museum and Education Organization of Houston. The CAMEO show opens Monday, Aug. 30, at the College of the Mainland in Texas City, and continues through Friday, Sept. 24. Fenci helped to establish the ceramics program at la Universidad Autonoma De Chihuahua (the state museum of Chihuahua) more than 15 years ago and returns periodically to teach, demonstrate and act as mentor to students. A new ceramic studio on the university campus was recently named in his honor.

Additionally, the Museum of Biblical Arts and the National Center for Jewish Art in Dallas will host a variety of art exhibitions in observance of the 20-year anniversary of 9/11. “Broken and Whole” showcases ceramic artists in Texas and will feature works by Fenci. The exhibition, which will open at the museum on Saturday, Sept. 11, is designed to express the “brokenness” resulting from the Sept. 11, 2001, attacks and the subsequent healing of a nation, according to Scott Peck, the museum’s executive director.

Fenci is teaching his 47th year at SFA. He has had exhibitions in galleries and museums throughout Texas and the U.S. Many of his former students are full-time, independent potters and sculptors, art gallery directors and directors of schools of art and ceramics program at prestigious universities across the U.S. and the world.