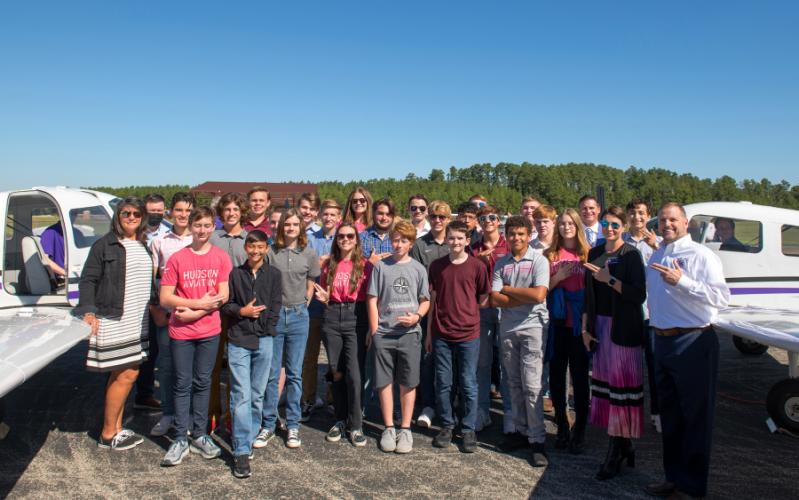 The initiative launched this fall with 21 SFA students, who refer to themselves as Flying Jacks, enrolled in the program. During last week’s event, the SFA students were joined by students studying aviation at Hudson High School, who visited the Nacogdoches airport to see the SFA planes firsthand and learn more about the program.

“Our students are flying in state-of-the-art planes that boast some of the most advanced equipment,” said Dr. Judy Abbott, dean of SFA’s Perkins College of Education. “A new 10,000-square-foot hangar also is under construction to house the planes and includes 2,000 square feet devoted to classroom space. We are thrilled to partner with HCH Aviation in establishing this program in East Texas.”

Full-motion and fixed-flight simulators also have arrived. Housed in the Education Annex on the SFA campus, aviation students can train on them anytime to sharpen their skills or prepare for their next flight. All the simulators are Federal Aviation Administration-approved training devices, and the students’ time can be logged.

“Both my great-grandfathers flew in World War II,” said Olivia Benson, a freshman from Spring. “I’ve always dreamed of being a pilot. I thought about the Air Force, but my mom didn’t want me to join the military. When I found out about SFA’s program, I was very excited. My goal is to one day fly internationally.”

Just last year, the SFA Board of Regents approved the partnership with HCH Aviation, a specialized aviation training school owned by SFA alumna Kristen Conklin, Jon Hughes and John Hasbun. The company has assisted SFA officials in developing and implementing the initiative based on industry standards and workforce needs.

Offered through the Perkins College of Education’s School of Human Sciences, aviation sciences as a major recently received approval from the Texas Higher Education Coordinating Board and is awaiting final approval by the Southern Association of Colleges and Schools. Unlike aviation programs offered elsewhere, SFA’s stands apart in distinct ways — particularly in its promise that students will fly inside advanced aircraft during their freshman year.

“SFA’s program is focused on the individual,” said Sarah Goldberg, a freshman from Allen. “The small class sizes attracted me to the program. I am getting individualized attention, and in only the first month of classes, I have already flown twice. I’m going to one day fly corporate aircraft.”

In addition to a bachelor’s degree in aviation sciences, program graduates will be private pilots qualified to become commercial pilots and to receive their instrument, certified flight instruction, and multi-engine ratings.

“We are training professional aviators, and there are many avenues in which the certificates and skills can be used,” Hughes said. “They will be licensed to fly for airlines, corporate flight departments, aerial photography, law enforcement, sightseeing and more.”

A baccalaureate-level degree also qualifies graduates for management positions with airlines, airports and private companies. Average compensation for qualified pilots and instructors is an even more enticing draw.

“The average salary for professional pilots is more than $140,000 annually,” Hughes said, “making it a wonderful career opportunity for young people to consider.”

Creation of the program did not happen overnight. Discussions surrounding the need for an aviation program at SFA began years ago, and that need was further exacerbated by the impact of the pandemic.

“Post-COVID-19 press releases from airline CEOs have been very specific about the need for new pilots,” said Dr. Chay Runnels, professor and interim director of the School of Human Sciences. “Boeing released a new study in 2020 that projected 763,000 new civil aviation pilots will be needed globally in the next 20 years. In this country alone, almost half of the current airline pilots will be retiring in the next 10 years.”

Abbott said many colleges and universities that offer aviation are experiencing student loads they cannot handle. “This is pushing flying two to three years further down their degree paths,” Abbott said. “Some other institutions are closing their doors to new admissions. It’s truly a perfect time for SFA to become involved in this coursework and degree plan.”

Outreach to East Texas middle and high school students is an integral part of the program. SFA Board of Regents member Jennifer Winston, who is a pilot, helped arrange for 25 Hudson High School students to take part in Thursday’s airport event, along with their instructor, Carla Ladner.

After the Hudson High School students attended the airport event, they traveled to the SFA campus, where they had the opportunity to test their skills on the flight simulators.

“It was a wonderful opportunity for our students to see first-hand the purpose of the information they are learning in our classes,” Ladner said. “SFA’s aviation sciences program will provide new opportunities for camaraderie and dual enrollment that will be a major benefit for our school.”

Nick Pablo, an SFA freshman from Austin, said the event provided a visual representation of the amount of effort going into the program.

“It’s exciting to see people care and that it’s going to go somewhere,” he said.