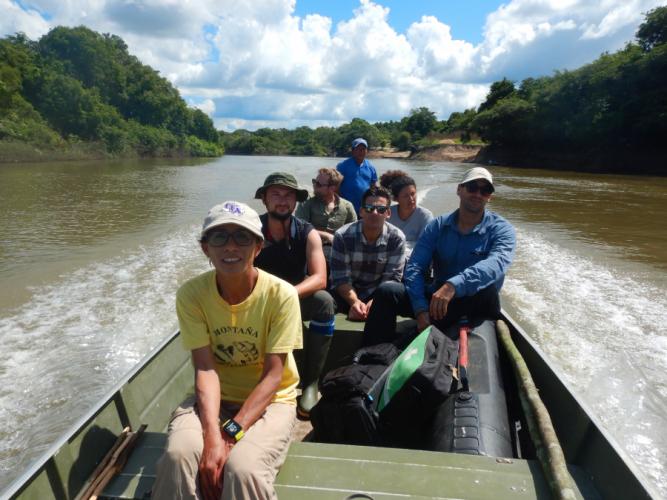 
NACOGODCHES, Texas — Surrounded by dense rainforest, Dr. Carmen Montana-Schalk, assistant professor of biology at Stephen F. Austin State University, dragged a net into the Rupununi River in Guyana hoping to catch a piranha. Having previously conducted research in the region, Montana-Schalk was the natural choice when the BBC show “Animal Impossible” needed an expert for an episode about piranhas.

Known by the locals as “Carmen, the Fish Biologist,” she has worked with villagers in Yupukari Village in Guyana on several fish conservation projects. On location with “Animal Impossible,” Montana-Schalk answered questions and provided insight as the hosts of the show learned how to measure the bite force of a red-bellied piranha and swam with a school of piranhas in a tank.

“This show was a great experience, not only because I was working with the fantastic BBC team, but also because I was sharing knowledge about a group of fish that people are afraid of and helped dispel some myths surrounding them,” Montana-Schalk said. “I was excited to share with people that piranhas are not as dangerous as the myths suggest and that it is actually safe to swim with them.”

Serving as an assistant professor at SFA since the fall of 2019, Montana-Schalk was originally attracted to the school because of the region’s high fish diversity. She has taught courses at SFA in general ecology and ichthyology and also serves as the curator of the fish collection in the Department of Biology. She is passionate about speaking to the importance of predatory fishes in freshwater ecosystems.

While there are no piranhas found natively in the U.S., they are plentiful in Montana-Schalk’s home country of Venezuela, where she encountered them in rivers while conducting research projects as an undergraduate and graduate student.

“In these rivers of South America, the fish diversity is so high that we can find about five species of piranhas in the same habitat,” Montana-Schalk said.

The piranhas group includes species with varied feeding habits, including fish that eat fruits, invertebrates, or fish scales, and carnivore piranhas that feed on fish. From the fossil of a Megapiranha that lived 10 million years ago, researchers learned that its bite force was estimated to be nearly three times greater than the bite force of an American alligator, Montana-Schalk said. It’s just another reason she loves studying them and teaching others about them.

Episode nine of “Animal Impossible,” “Piranhas,” can be viewed on Amazon.

To learn more about Montana-Schalk’s work with SFA’s Department of Biology, visit sfasu.edu/biology.