SFA collaboration to present ‘From the Diaries of Adam and Eve’ 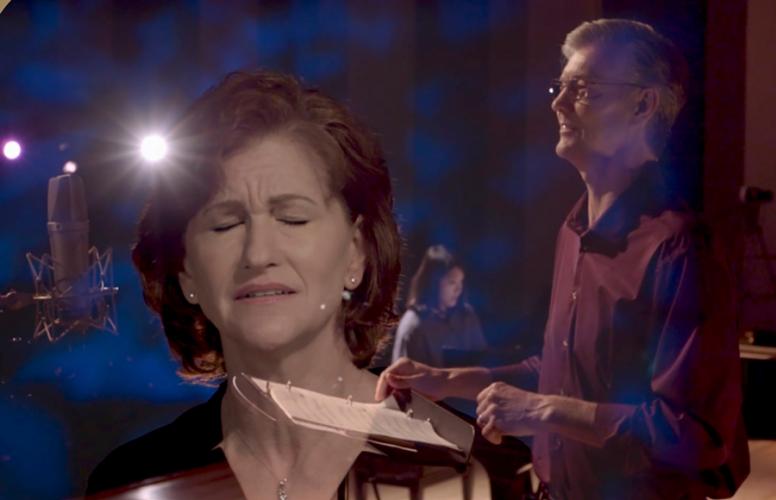 A collaboration between colleagues at Stephen F. Austin State University will bring to life “From the Diaries of Adam and Eve,” composed by SFA music professor Stephen Lias, at 7 p.m. Wednesday, June 23. The event will be streamed on Facebook and Youtube and accessible at http://bit.ly/AdamEve2021 and https://www.facebook.com/stephenliascomposer.


NACOGDOCHES, Texas – It was the musical composition project that almost didn’t happen. Plans were in place. Then came a worldwide pandemic, a pregnant pianist with a clear delivery deadline, and an apocalyptic Texas snow storm on the weekend participants were scheduled for performing and recording.

“Miraculously, the baby was patient, and we were able to move the all-day video/audio recording session one week later; we recorded it while many of us still didn’t have water or electricity at our houses because of the storm,” said Stephen Lias, professor of composition in the Stephen F. Austin State University School of Music and composer for “From the Diaries of Adam and Eve.”

“It is sort of a miracle it ever happened,” Lias added.

“From The Diaries of Adam and Eve” will be simultaneously streamed on Facebook and Youtube at 7 p.m. Wednesday, June 23. Lias wrote the 30-minute dramatic piece for mezzo-soprano, baritone and piano with humorous and moving texts by Mark Twain in 1995 when he was finishing his doctoral degree at Louisiana State University. The original version was written for orchestra.

“Over the years I’ve known that I needed a piano-vocal version if it was going to be performed more widely,” he said. “Twain wrote the charming ‘Extracts from Adam’s Diary’ in 1904 and then followed its success up in 1906 with ‘Eve’s Diary.’ My idea was to carefully select excerpts from both works to create a unified piece for two singers. Although they never speak directly to each other – being diary entries, after all – they experience the journey of life simultaneously, and we get a view into the humor and emotion that Twain is so good at.”

In addition to Lias, other SFA collaborators/performers include Scott LaGraff , voice professor at SFA, and his wife, Kimberly, portraying the roles of Adam and Eve; and Hyun Ji Oh Jeon, SFA collaborative pianist, on piano. Technical collaborators include Trey Cartwright, director of photography and colorist who is a graduate of SFA’s filmmaking program and videographer for SFA’s University Marketing Communications office; James Adams, director of audio production and head of the School of Music’s Sound Recording Technology program; Angela Bacarisse, lighting designer and professor in the School of Theatre; Steve Bacarisse, technical lighting advisor and technical director for the SFA College of Fine Arts; and Scott Stephen Hansen, editorial and transcription assistant and graduate student in the School of Music.

“We set out specifically to make a video version of this piece – not just a captured live performance,” Lias said. “We wanted it to be intimate and bring the audience right in next to the performers. We’re hoping to share it with the broad musical community that exists online – both our local friends, but also singers, pianists and music-lovers everywhere who might enjoy a new piece.

“While short-form videos of contemporary classical music have been a growing genre, the pandemic certainly forced many ensembles and audiences to become used to experiencing music in online events, and this work lends itself exceptionally well to that,” Lias added.

The score just recently became available for purchase through the Theodore Presser Company, and it is Lias’ hope that this engaging video production of the work will “help expose singers to the work and help this new publication find ‘find it’s legs.’”

“As with all the arts, we also hope this work will be entertaining and moving for a broad range of musicians and audience members,” Lias said.

The June 23 event will start with a short video featurette with some of the collaborators talking about the project, followed by the full 30-minute work, which comes in four movements titled “The First Week,” “The Second Week,” “A Year Later” and “Many Years Later.” After the piece concludes, the team – performers and technical staff – will be available for a live video question-and-answer session with the audience.

Each collaborator came away with different learning experiences that relate to their disciplines. Angela Bacarisse said she was excited to work on the project with her husband “because it was a challenge to take a non-theatrical space and make it look like somewhere else.” They used lighting equipment that was visible throughout the recording and changed the look of the space  and reflected changes of emotion through changing colors. “It was an opportunity to be more creative, and we didn’t have to hide the fact that the magic was happening,” Stephen Bacarisse said.

Cartwright said he entered into the project curious as to how it was going to happen. “We were going to use more cameras than we had access to on campus,” he said. “It was a challenge getting these different cameras that would show footage as similar as we could. But we got good images that served the purpose of story being told through the music. I think it looks very good, and I’m happy with my part of the project.”

Scott LaGraff explained the story as “an exploration of the relationship of marriage and the arch that it goes through using Adam and Eve as archetypes.” He said he and Kimberly identify with Adam and Eve as they are presented in the piece.

“We’ve been married for over 27 years, so this is a deeply personal piece for us,” Scott LaGraff said, adding that Twain “nails it” in identifying stages of a relationship as time passes, starting humorously as Twain plays on the challenges of early marriage when young couples see the faults within each other and “get on each other’s nerves.”

“By the end, they realize how significant and important and transformative their relationship has been over many years together,” he said “It’s a good play on real life.”

Those wishing to attend can visit http://bit.ly/AdamEve2021 for links to the event, or check Lias’ Facebook page at https://www.facebook.com/stephenliascomposer.  Lias is represented by Black Tea Music, a management company in New York City. Information is available at https://blackteamusic.com/.