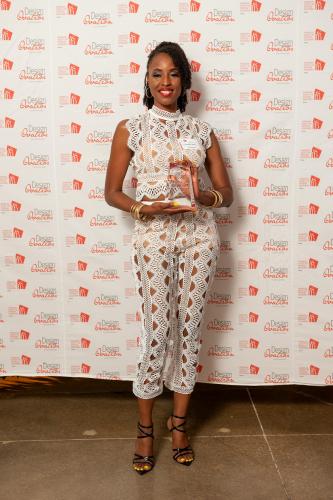 SFA alumnus Sherine Sebastian recently received second place in the Design Ovation Awards, awarded by the American Society of Interior Designers’ Dallas chapter, for her work within the design community.

Sherine Sebastian and her team at Joanie Wyll and Associates Inc. received second place in the Design Ovation Awards, awarded by the American Society of Interior Designers’ Dallas chapter.

“It felt amazing to find out I had won the award because the Design Ovation is a notable award within the Dallas design community,” Sebastian said. “Since I began working with Joanie, my heart has been set on making my mark as a designer in Dallas as she did.”

Sebastian came to SFA in 2008 as an international student from Antigua and Barbuda and quickly immersed herself in the School of Human Sciences’ interior design program. She enrolled in honor’s classes and joined SFA’s student chapters of ASID and the International Interior Design Association, as well as Phi Upsilon Omicron. She also served as president of the Caribbean Student Organization.

Even with her hard work, Sebastian met with a few roadblocks.

“I remember doing one of my first design classes, and we were learning to render by hand,” she said. “That was such a frustrating moment for me, and I felt like an absolute failure at it.”

With some help from a senior design student, Sebastian began to better understand the process of rendering, or producing a scale drawing of a proposed design. She entered the rendering in the department’s design competition and won second best in show and won the category for hand renderings.

“I was blown away to say the least, but that was very encouraging to me that I could really do this,” she said.

Sebastian interned at SFA’s Design Center and was involved with the redesign of the School of Honors along with some other projects on campus.

This real-world experience was integral to her future success and helped develop the skills she needed to succeed as an interior designer, Sebastian said.

“In design school, we were constantly given tasks that forced us to remove self from the equation and focus on the needs of the clients,” she said. “This is an important concept I think all designers take with them.”

Sebastian won the Design Innovation award for a home renovation she helped design for a client. As a designer, she created all interior drawings necessary for the project and managed the specifications of light fixtures and placement of art lights in addition to furniture selection.

“This is one award down with many more to go,” Sebastian said.

Learn more about the School of Human Sciences at sfasu.edu/coe.