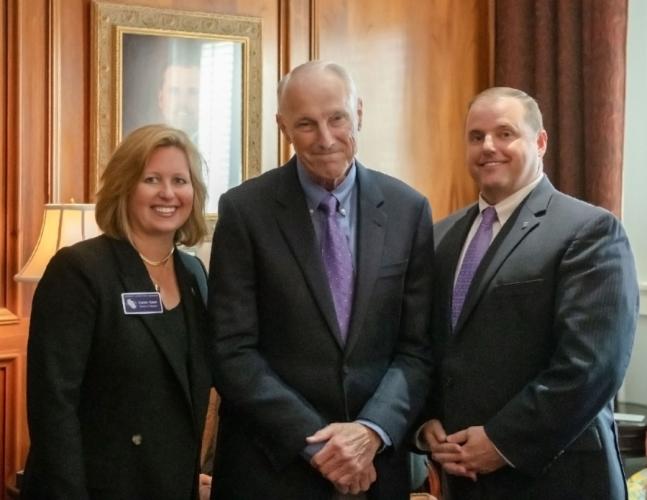 Stephen F. Austin State University’s College of Fine Arts will be renamed the Micky Elliott College of Fine Arts to recognize the Elliott family’s longtime support of the university and the late Micky Elliott’s love of the arts and the Nacogdoches community. The naming was announced in conjunction with the launch of the public phase of SFA’s $100 million fundraising campaign and was approved by SFA’s Board of Regents. Pictured are, from left, Karen Gantt, chair of the Board of Regents, Bill Elliott and SFA President Scott Gordon.


Stephen F. Austin State University launched the public phase of its $100 million fundraising campaign in conjunction with Homecoming activities on Friday and announced plans to rename the College of Fine Arts in honor of a longtime Nacogdoches resident who had a deep love of the community and the arts.

The new name, the Micky Elliott College of Fine Arts, was approved by SFA’s Board of Regents and recognizes the longtime support of the Elliott family and a recent gift of $8 million pledged to support scholarships for fine arts students.

“With this gift, Bill Elliott is honoring his late wife, providing for our current students and investing in the future of SFA,” said Dr. Scott Gordon, SFA president. “We are grateful for the way the Elliott family has elevated SFA through their generosity.”

Bill Elliott graduated from Louisiana Tech University with a degree in music. He began his career in the electrical distribution industry working for his father. With his own ideas of how a distributorship should be run, along with $20,000 of his own money and an $80,000 loan, Elliott and Micky began their first electrical supply company in Nacogdoches in 1972.

Today Elliott Electric Supply has more than 165 store locations across nine states. It has been recognized as one of the largest electrical distributors in Electrical Wholesaling Magazine, with more than 2,100 employees – 200 of those working at its Nacogdoches location.

“There are many great opportunities to help SFA build on its record of excellence,” Elliott said. “But having a degree in music, I was blown away with the quality of the students, programs and instructors in the College of Fine Arts. The college not only develops professional performers, but offers East Texas residents an opportunity to enjoy cultural opportunities that rival more metropolitan areas.”

Dr. Gary Wurtz, interim dean of fine arts, said the gift is a “game changer” for the School of Music.

“This generous gift will generate substantial scholarship dollars that will allow us to recruit more high-quality students than ever before, placing us in the position to compete against the biggest and best schools in the state and region — if not nationally — for those students,” Wurtz said. “Furthermore, there is an elevated status and pride that comes with being a named college, and we are excited about becoming the Micky Elliott College of Fine Arts.”

“Bill Elliott remains an inspiration for his dedication to the East Texas community, and to his business and industry,” Gordon said. “A gift of this magnitude is monumental for SFA and allows us to boldly dream for SFA’s second century.”

Regents approved the renaming during their regular quarterly meeting, which concluded today.

More than $79 million has already been raised in conjunction with the capital campaign, including 12 donations of $1 million or more. More than 8,600 first-time donors have participated in the effort.

For more information about SFA fine arts, visit sfasu.edu/finearts. More about the campaign is available at sfasu.edu/elevate.