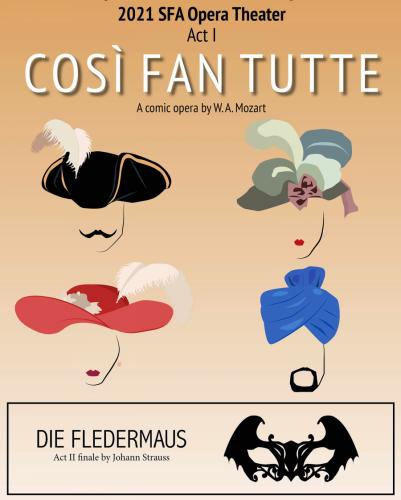 The SFA School of Music will present Act I of Wolfgang Amadeus Mozart’s “Così fan tutte,” or “School for Lovers,” followed by Act II finale of “Die Fledermaus” by Johann Strauss as this year’s Opera Theater March 25 through 27 in Cole Concert Hall on the university campus.


NACOGDOCHES, Texas – Rehearsal time lost during spring break is always a consideration for the Stephen F. Austin State University School of Music as it prepares to present the SFA Opera Theater each spring.

But throw in an additional seven days of lost rehearsal time caused by an unprecedented winter storm that shut down the entire state of Texas for a week, and you have a situation that demands creative, detailed scheduling to make up for lost time.

Dr. Deborah Dalton, associate professor of voice at SFA, believes the voice students can and will rise to the challenge.

“We are scrambling,” she said. “We lost six two-hour rehearsals to the storms, so now we are playing catch-up. It is difficult but not impossible.”

This year’s opera theatre, scheduled for Thursday through Saturday, March 25 through 27, will feature portions of two operas: Act I of Wolfgang Amadeus Mozart’s “Così fan tutte,” or “School for Lovers,” followed by Act II finale of “Die Fledermaus” by Johann Strauss. These selections were made with COVID-19 social distancing protocols in mind, Dalton said.

“I needed to find something with a small cast – six roles – in order to be able to observe social distancing for safety,” she said. “It would also need to be shorter so that we could use the disinfecting foggers every 30 minutes. ‘Così fan tutte’ fit those parameters and offers the singers an opportunity to learn how to sing Mozart recitatives.”

Additionally, SFA’s production of two shorter operas in 2020, “The Medium” and “Sister Angelica,” only had men in an offstage chorus. Then COVID hit, and the School of Music had to cancel all performances. As a result, Dalton was looking for a work that would feature some of those younger vocalists whose performance opportunities were cut short last year by the pandemic.

“I needed to find a piece that featured a chorus to give the younger singers some stage experience,” Dalton said. “The Act II finale of ‘Die Fledermaus’ is roughly 15 minutes long. The chorus is featured in some of the most gorgeous waltzes by the “Waltz King,” Johann Strauss.”

Directing an opera performance in a pandemic has its share of obstacles to overcome.

“That has really been a challenge for all of us,” Dalton said. “All of the singers will perform masked, and as I said previously, we must take breaks every half hour to fog the stage. It has taken lots of creativity to stage the love scenes with the lovers 6-to-10 feet apart. For ‘Die Fledermaus,’ the challenge is to place the chorus far enough apart to be socially distant on a much smaller stage – Cole Concert Hall.”

Opera performances traditionally take place on the spacious stage in W.M. Turner Auditorium. But with Griffith Fine Arts Building in the midst of a major renovation and expansion project, most music performances are now being held in Cole Concert Hall.

Because of other pandemic-related limitations, costume design and set design were also scaled back. For ‘Così,’ the costumes are rented from Norcostco, a costume rental company in Dallas. This presentation of “Fledermaus” is set in contemporary time, so the men have been asked to wear tuxedos, and the women, an evening gown similar to a prom dress. A few special costumes were rented from Norcostco, as well.

“We’re still working on a solution for the sets,” Dalton said. “Our venue is a concert hall stage, not a theater, so there are no curtains or line sets to hang back drops. The beautiful costumes, props and some furniture pieces will suggest time and place.”

Creative scheduling is helping to make up for lost rehearsal time.

“Assistant director Nita Hudson does a wonderful job scheduling our rehearsals in a way that each segment of a show is blocked/sung by both casts in one rehearsal, and then we work on that same segment a few days later,” Dalton explained. “I am confident that our students will rise to this challenge and perform beautifully.”

The memorable music and funny story lines for each of the operas should give patrons a respite from the anxiety of the past year, Dalton said.

“I hope that patrons will enjoy a break from the stresses of this past year and leave smiling and humming the beautiful tunes,” she said. “I also hope they realize all the many hours and hard work that these students have put into their performances in addition to all of their classes, COVID, snow and ice storms, etc.

“The finale of Act I in ‘Così’ is hilarious!” she added. “The men, disguised as Albanians, are wooing each other’s fiancés in order to win a bet that the ladies will remain faithful and not give in to the temptation of these exotic visitors. The men rush in drinking ‘poison’ because the ladies have rejected their advances. Chaos ensues. The ladies are shocked, the men are delighted, and the maid comes in disguised as a famous doctor to take away the effects of the poison. It definitely leaves you laughing and wanting more!”

Performances are at 7:30 p.m. Thursday through Saturday, March 25 through 27, in Cole Concert Hall. Seating is limited, and audience members will be required to wear face masks and social distance from others not in their immediate group. Tickets are $15 for adults, $10 for seniors and $7.50 for students and youth. For tickets or more information, visit finearts.sfasu.edu or call the SFA Fine Arts Box Office at (936) 468-6407. Free access to online, livestreamed performances will be available at music.sfasu.edu each night. For more information about the School of Music, call (936) 468-4602.