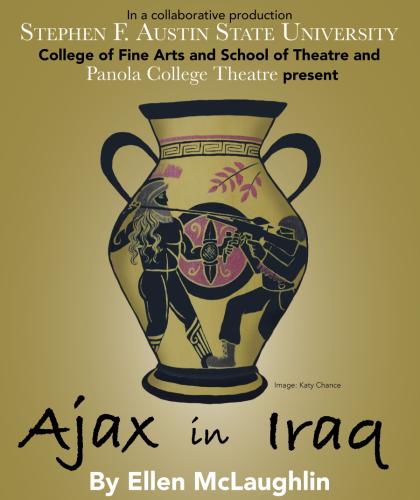 Stephen F. Austin State University School of Theatre, in collaboration with Panola College Theatre, will present Ellen McLaughlin’ play “Ajax in Iraq” Nov. 9 through 13 at the Community House in Center.

Past and present collide in McLaughlin's mash-up of Sophocles' classic tragedy “Ajax” with the modern-day war in Iraq. The play follows the parallel narratives of Ajax, an ancient Greek military hero, and A.J., a modern female American soldier, both undone by the betrayal of a commanding officer. Athena, goddess of war, coolly presides over the whole. Inspired by material collected from interviews with Iraq war veterans and their families, “Ajax in Iraq” explores the timeless struggle soldiers face in trying to make sense of war.

“Ajax in Iraq” will be presented at 7:30 nightly Tuesday through Saturday, Nov. 9 through 13, in Community House, 425 San Augustine St. in Center. The play was particularly suited for SFA School of Theatre Director Cleo House Jr.’s idea to develop a show in collaboration with a nearby junior college, according to Dr. Slade Billew, assistant professor of theatre at SFA.

“We have had a good relationship with Panola over the years, so we thought they would be the perfect partner to test this idea,” he said. Billew and Karen King, professor of theatre at Panola, selected McLaughlin’s play.

“We were looking for something that spoke to ongoing issues and concerns in our country and our region particularly,” Billew said. “The experience of soldiers and veterans is an important ongoing conversation, and this play does an excellent job of exploring the timelessness of those questions by connecting the contemporary war in Iraq with the oldest known war in the western tradition, the Trojan War.”

The play also worked well to divide between two locations two casts of students that are only able to all be in the same place occasionally. The play follows two stories simultaneously – the first being Ajax, a soldier in the Trojan war who is driven to destructive behavior by the influence of the goddess Athena.

“This part is loosely based on Sophocles’ ancient play ‘Ajax,’ but it has been updated in its language by the playwright,” Billew said. “The other part of the play is centered on the experience of contemporary soldiers in the Iraq war. It focuses specifically on the experience of a female soldier, A.J., whose journey mirrors that of Ajax. The contemporary parts of the play were created by McLaughlin from interviews with soldiers and veterans of the Iraq war, as well as their families.”

Billew said he believes it is important that the experiences of soldiers, veterans and their families “are seen and shared with the larger community.”

“Often, these groups suffer in silence,” he said, “and the play offers an artistic way for audiences who don’t know these stories to come to a better understanding of the experiences of our military community in a way that is respectful, but also honest about the difficulties of that experience for soldiers themselves and everyone in their lives.”

Of particular challenge in this collaboration is creating a production with two teams that don’t get to be “in the same space regularly,” Billew said.

“In some ways, the tools we have developed through the pandemic for communicating and creating over distances have been helpful here,” he said. “Also, we are performing the show in Center – not at SFA or Panola. The people and leadership of Center have been really supportive  and great in working with us. We have about five days to turn a community house into a theatre and figure out how the show works in that space.”

“Different students have different levels of relationship to the experience of the military, so some of them are really thinking about these issues deeply for the first time,” he explained. “Also, because we are collaborating, the students have to be even more adaptable than normal. When we do have the chance to all be together, they have to really focus and learn quickly to work with people they have just met.”

Billew said he hopes military men and women and their families who come to the play “feel seen and believe that we have done our best to reflect some parts of their experience.”

“I hope other audience members get an insight into a part of our country that is often opaque to the average citizen,” he added.

Containing adult language, adult content and a scene of sexual violence, “Ajax in Iraq” is for mature audiences.