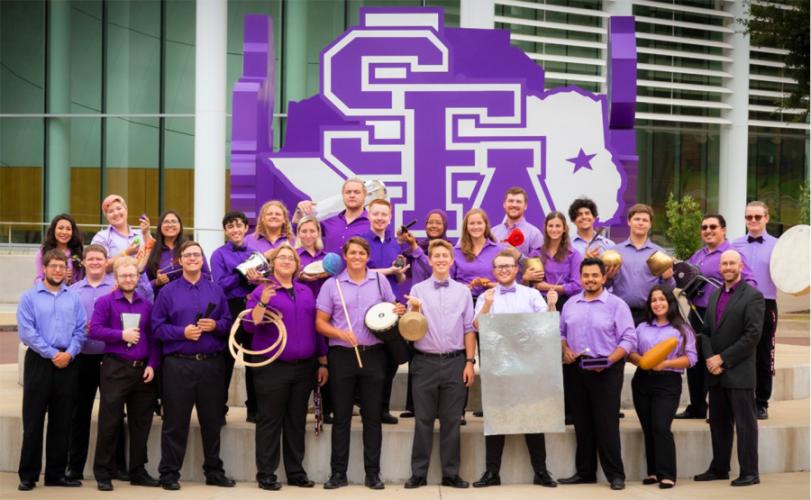 The SFA Percussion Ensemble will present its TMEA concert program in a preview performance at 7:30 p.m. Friday, Feb. 4, in Cole Concert Hall on the SFA campus.


NACOGDOCHES, Texas – The Percussion Ensemble at Stephen F. Austin State University has been invited to perform at this year’s Texas Music Educators Association convention slated for Feb. 9 through 12 in San Antonio. Representing more than 17,000 current and future music educator members, TMEA works to support the future of music education in Texas.

The ensemble’s TMEA program will be presented in a preview concert at 7:30 p.m. Friday, Feb. 4, in Cole Concert Hall on the SFA campus. The recital features works by Joe W. Moore, Francisco Perez, Andrea Venet and Andy Akiho. The Percussion Ensemble is directed by Dr. Brad Meyer, director of percussion studies at SFA, with Dr. Jamie Vilseck, the ensemble’s coach.

Written in 2018, Moore’s “Ojo” was inspired by Latin folklore with a goal of keeping the audience engaged with quick passages, rhythmic variety, timbre changes, and movements transitioning between instruments, giving the performers "ojo" (meaning “evil eye”) because “there is no other option but to watch and listen intently,” according to Moore.

“Ephemera” was inspired by the Lamar University students of Perez during the past two years of the pandemic. “After almost two years without composing any original music for percussion, witnessing the grit and hard work from my students at Lamar University over the course of the eventful 2020-2021 year inspired me to write this short but deeply meaningful piece for mallet sextet,” he wrote.

Venet’s “Omnes Trio,” Latin for “Trio for All,” was written as an expression to promote equality within the percussion field, according to the composer. “With homogeneous instrumentation and a shared set-up, the piece is characterized by hocketed rhythmic lines, trading grooves between players, and soloistic passages that create rapidly flowing textures and quasi-melodic lines,” Venet wrote.

Akiho’s “to wALk Or ruN in wEst harlem” was originally written for chamber ensemble (flute, clarinet, violin, cello, piano, vibes and drums) and premiered at the 2008 Bang on a Can Summer Music Festival. Akiho said 2008 was one of the most influential and fortunate years of his life, but it began “hilariously tumultuous.”

“Within the span of 48 hours, I carelessly threw myself into multiple ridiculously unfortunate New York City situations – illegally parking my car under a suspicious overpass only to find it completely trashed and inoperable after being broken into; nearly slicing my thumb off cutting carrots with an ironically dull knife; and being attacked and stabbed by a gang while cluelessly walking home from the Manhattan School of Music after a late-night practice session,” he wrote. “This seven-minute composition depicts that particular evening expressed as a nonlinear soundtrack: escaping the attack, following the perpetrators in a taxi, trying to convince the apathetic cops to help me find the suspects, and the hospital monitor beeps of the emergency room are some of the themes in the music narration. Balancing out the NYC karma later that year, I found an old upright piano on the same corner where I was attacked. With the help of a friendly bystander, I pushed the piano up the hill to my apartment and composed this piece on it.”