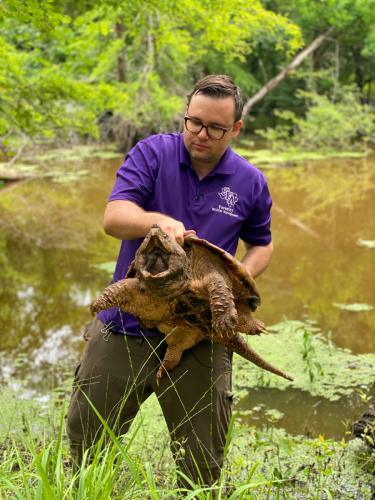 Twenty-one adult alligator snapping turtles were recently released back into East Texas waterways as part of a coordinated effort by the Texas Parks and Wildlife Department, U.S. Fish and Wildlife Service, Stephen F. Austin State University and multiple additional agencies after being seized in a trafficking attempt. Although once common, populations of alligator snapping turtles have been so drastically reduced that it is now listed as a species of conservation concern by every state within its natural range. Pictured, Dr. Christopher Schalk, assistant professor of forest wildlife management at SFA, prepares to release one of the turtles back into its native habitat.

Although once common, populations of alligator snapping turtles, the largest freshwater turtle species in North America, have been so drastically reduced that it is now listed as a species of conservation concern by every state within its natural range. The U.S. Fish and Wildlife Service also is considering federal protection of the species under the Endangered Species Act.

Alligator snapping turtles remain a popular food item in Louisiana with a restricted limit of one per day in the state. This has led to a smaller population of the species in Louisiana, along with an increase in poaching in Texas where harvest is illegal.

“Alligator snapping turtles have been protected in Texas since the 1970s,” said Meredith Longoria, deputy director of the TPWD Wildlife Division. “We have a unique opportunity to not only return these turtles to their range in Texas from which they were taken, but also to learn more about their habits and their biology so we can more effectively conserve Texas populations to ensure their viability for generations to come.”

Once seized by authorities, the turtles were transported to the Natchitoches National Fish Hatchery in Louisiana, where they were housed until their recent release.

Dr. Christopher Schalk, assistant professor of forest wildlife management at SFA’s Arthur Temple College of Forestry and Agriculture, became involved in the repatriation efforts after he was approached by Dr. Paul Crump, state herpetologist for the TPWD.

“He was familiar with our college’s ongoing research assessing the distribution and range of alligator snapping turtles in Texas and asked if we would like to be involved in this repatriation effort,” Schalk said.

SFA research technicians assisted the multi-agency effort by conducting occupancy research of current wild populations in the repatriation zones leading up to the release.

Staff members with TPWD’s Nongame and Rare Species Program collaborated with turtle researchers across Texas and the Turtle Survival Alliance to support the development of a genetic analysis on all of the turtles that were released. This was done to determine the river basin where each turtle originated.

Additionally, a veterinarian evaluated the health of every turtle and fitted each with radio telemetry tags allowing SFA researchers to monitor the turtle’s survival, habitat use and movement following release.

“It feels good to realize these turtles have a second chance,” Schalk said. “What is important is that they’re reproductively mature adult turtles. Given their life history, very few actually make it to adulthood.”

Schalk said it also is significant that a large number of those repatriated were breeding-age females that can contribute to the stability of the population.

More information about nongame and rare species in Texas, including species listed as threatened or endangered, can be found on TPWD’s Wildlife Diversity page at tpwd.texas.gov/huntwild/wild/wildlife_diversity.