SFA School of Theatre to present ‘The Maids’ 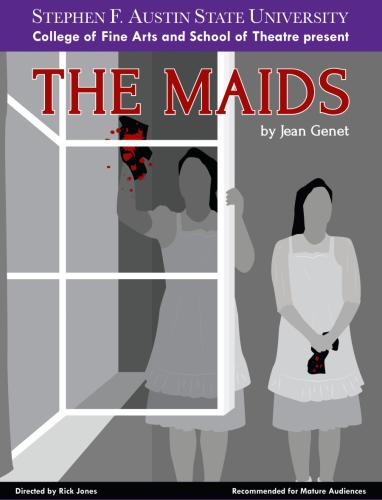 The SFA School of Theatre will present Jean Genet’s “The Maids” at 7:30 nightly Feb 23 through 27 virtually and in-person in Kennedy Auditorium on campus. Purchase tickets/virtual access at boxoffice.sfasu.edu or call (936) 468-6407.


NACOGDOCHES, Texas – Rick Jones believes that working on plays like Jean Genet’s “The Maids” is “how you get better.”

“Any actor or director who isn’t a little scared of this play isn’t paying sufficient attention,” the Stephen F. Austin State University professor of theatre said of the final play he will direct before his retirement from SFA at the end of the academic year.

The SFA School of Theatre will present Genet’s “The Maids” at 7:30 nightly Feb 23 through 27 online and in-person in Kennedy Auditorium on campus. With expansion and renovation work underway at Griffith Fine Arts Building, the School of Theatre’s Mainstage Series performance venue, W.M. Turner Auditorium, is currently not available. Instead, theatre students will use Kennedy Auditorium as their main venue for the next two years.

Jones describes “The Maids” as one of the most famous plays of theatre of the absurd. Like “No Exit,” which the School of Theatre presented in the fall, it was written in the mid-1940s and features a small cast; in this case, three women.

“All three roles are excellent and will provide significant challenges for even our best and most experienced actors,” he said. “It works well in a space not designed as a theatre, and it provides the actors with an opportunity to really sink their teeth into roles … the two maids are both on stage for virtually the entire show.

“It’s a fascinating work dealing with issues of violence, jealousy, mental health, sexuality, gender and especially class,” he added. The play is recommended for mature audiences.

The title characters are sisters in the employ of “Madame.” “Monsieur” has been imprisoned based on an anonymous tip from the maids. The two plot to murder their employer, running through a series of episodes that might be ritual, might be fantasy, and might be reality, Jones explains.

One of the more interesting elements of the production, Jones said, will be that there are understudies for each role; all of the understudies will be guaranteed a performance, provided that health and COVID protocols allow.

“We’ll be handling the understudy roles a little differently than standard practice: they will not be expected or encouraged to do what the other actors are doing,” Jones said. “Actors will need to be ‘in the moment’ even more than in a standard production, responding to the stimuli that are actually happening on stage rather than to what may have been rehearsed with someone else. Assuming all goes well, we’ll have four different casts for a five-night run.”

“The Maids” was one of three plays Jones, who is in his 20th year of teaching at SFA, submitted more than a year ago as possibilities to perform this year. Submissions for consideration were made pre-COVID and long before he contemplated retirement. But things have a way of working out like they’re supposed to.

“I think it's an apt coda,” he said. “The small cast works particularly well under these circumstances. It's an intellectual, ‘talkie’ play, but it will be accessible if we do it right. There's a chance that it won't work, of course; this just might be the most difficult play I've ever attempted, and heroic failures are still valuable. They pay me to get students better more than to necessarily do great productions. I think I can guarantee the former, and, at this point in the rehearsal process, I’m pretty confident about the latter, as well.”

Patrons who attend the show in person will be required to wear face coverings and socially distance themselves from other audience members not in their immediate group. Actors will be maskless if the School of Theatre gets approval from SFA health and safety officials. All participants in all rehearsals prior to technical/dress rehearsals will wear masks at all times. Company members will be tested for COVID regularly throughout the process and must pass a temperature check before every performance.