SFA School of Theatre to present Martin’s ‘Talking With …’ monologues 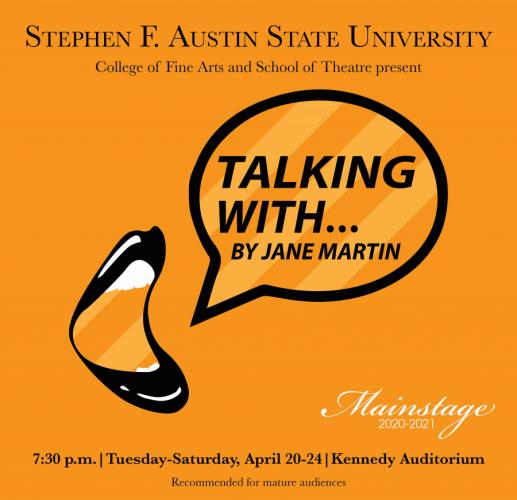 The SFA School of Theatre will present Jane Martin’s “Talking With …” Tuesday through Saturday, April 20 through 24, in Kennedy Auditorium on the university campus. The show will also be livestreamed nightly.


NACOGDOCHES, Texas – Even as more and more Americans are getting a COVID vaccine, and pandemic protocols are beginning to loosen up a bit, safety remains at the forefront for Stephen F. Austin State University School of Theatre as students prepare to present Jane Martin’s “Talking With …” April 20 through 24 in Kennedy Auditorium on the SFA campus.

Martin’s “Talking With …” features idiosyncratic characters who amuse, move, frighten and always speak from the depths of their souls. They include a baton twirler, a fundamentalist snake handler, an ex-rodeo rider and a person whose greatest desire is to live in a McDonald’s.

“The show offers a great variety in both the monologues and the acting,” according to Jack Heifner, adjunct instructor, SFA’s playwright-in-residence and the play’s director.

“Talking With …” takes the place of a previously chosen play that required too much physical contact among actors, Heifner said. The show will be presented in person, and it will be livestreamed.

“‘Talking With …’ is a series of monologues that can be rehearsed and performed separately, without more than one cast member being onstage at the same time,” Heifner said. “I have always liked the show and thought it was the perfect show considering the distancing guidelines we are following for both the cast and the audiences.”

“Every effort is being made to make the rehearsals and performances safe for everyone involved,” Heifner said.

Monologues can be difficult for actors, and presenting an entire evening of them requires variety in both the presentation and the performances, Heifner said.

“Taking the audience on a journey through the storytelling in the monologues will be a challenge for the student actors,” Heifner said. “Anyone who is interested in good writing and good acting should see ‘Talking With …,’ and those who do will be delighted in seeing the actors in such a challenging piece. The monologues offer rich characters and interesting stories about their lives.”

The author uses a pseudonym, “and no one knows who Jane Martin is,” Heifner said. “They have been active from the early 1980s until the present, but their identity is not known.” Martin first came to national attention for “Talking With …” in Louisville’s 1982 Humana Festival of New American Plays. Since its New York premiere at Manhattan Theatre Club in 1982, “Talking With …” has been performed around the world, winning the Best Foreign Play of the Year Award in Germany from Theatre Heute magazine.

Patrons who attend the show in person will be required to wear face coverings and socially distance themselves from other audience members not in their immediate group. Seating is limited.