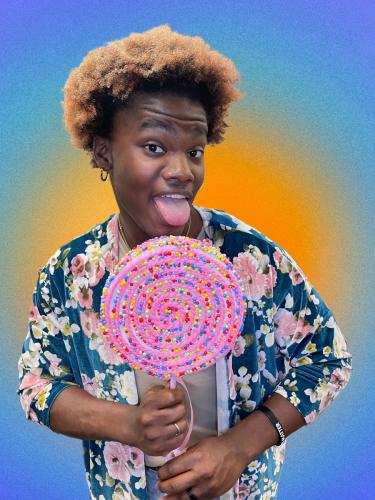 Donald Whaley Jr., Texarkana sophomore, is among the cast members in the SFA School of Theatre’s presentation of Robert O’Hara’s hilarious and daring play “Bootycandy” showing at 7:30 nightly Oct. 12 through 16 in Kennedy Auditorium on the SFA campus.


NACOGDOCHES, Texas – Part of the mission of the School of Theatre at Stephen F. Austin State University is to promote diversity in the study of the arts. Presenting plays with characters and themes that reflect diversity in race, culture and beliefs is one avenue to achieving that goal.

School of Theatre Director Cleo House Jr. believes it’s important for theatre arts majors, and audiences alike, to see themselves represented on the stages of the SFA campus. That’s one of the reasons House selected Robert O’Hara’s play “Bootycandy” for this year’s Mainstage Series at SFA. The play highlights an underrepresented element of theatre: the gay black man. Among the lessons House hopes his students learn in presenting the play is to recognize ethnic inequalities within the arts and to work toward improving those disparities.

“Believe it or not, theatre tends to be very white and very straight – particularly what is shown on stage,” House said. “I’m gay and black, so I know the importance of seeing yourself represented on stage, on TV and in film.

“‘Bootycandy’ is a comedy, but it is also a play that presents issues from the point of view of a particular gay black man, in this particular story,” House said. “To my knowledge, in all of our years at SFA, we’ve never done a play from this perspective. I emphasize ‘particular’ because the issues or events are in no way all-encompassing.”

The play will be presented at 7:30 nightly Tuesday through Saturday, Oct. 12 through 16, in Kennedy Auditorium on the SFA campus.

Based on the author’s own experiences, “Bootycandy” is a satiric portrait of American life told through the lens of Sutter, a gay black man on an outrageous odyssey through his childhood home, his church, dive bars, motel rooms and even nursing homes. O'Hara weaves together scenes, sermons, sketches and daring meta-theatrics to create a kaleidoscopic portrayal of growing up gay and black.

“The play also looks at a black family and how each person deals with a family member who is so different from the rest of them,” House said. “Our approach to this play is really to relay all of the ‘funny’ that’s there in the script and to tell the story honestly. These are real people, and their circumstances for the most part are not that extraordinary. But for them, it’s everything.”

Containing strong language and mature content that involves discussions of sexuality, “Bootycandy” is a comedy that looks at attitudes towards gays in black culture.

“It’s definitely more on the ‘rated R’ side of things, but other than that, this play is for anyone who is curious about how other people live and their experiences,” House said. “The play is not a call to action. It is not trying to tell you how to behave. It’s not ‘preachy,’ but it has a lot to say. It has a lot to reveal about how these particular people live, and it doesn’t shy away from that which isn’t pretty or that which is dark.

“It may contain moments that some may find funny, but another person might find offensive,” he added. “There’s a line in the play that I’m going to paraphrase that says, ‘If it is hard for the author to write it, why should it be easy for the audience to digest it?’ For me, this really says it all, because the playwright has gone through great pains to discuss trauma and how that trauma may or may not cause a person to traumatize another. The old adage of ‘hurt people hurt people’ comes to mind.”

When asked if all directors have an agenda when they select a play to perform, House gave a definite “yes.”

“It may or may not be a political agenda, but there has to be something you want to say,” he said. “Any art we create should be personal to us. Noted feminist Carol Hanisch wrote, ‘The personal is political.’ We should see, hear and seek to understand. No one group is a monolith, no matter how much they may appear to be at first. Humans can be kind and cruel, victim and perpetrator.”

House expects audience members to leave a performance of “Bootycandy” with some questions and “a conversation on their lips.” But he also hopes “they can have some great laughs!”

“Bootycandy” contains mature themes and language that may be triggering for some viewers.