SFA School of Theatre’s Mainstage Series features ‘something for everyone’ 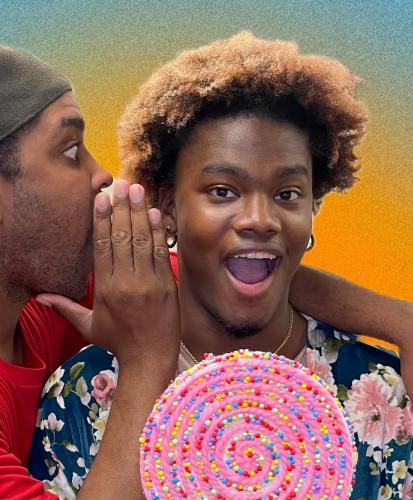 From classics to comedies, the 2021-22 School of Theatre Mainstage Series will feature something for everyone. The first show of the season is “Bootycandy,” Robert O’Hara’s hilarious and daring portrayal of growing up gay and black.


NACOGDOCHES, Texas – For unique, live-theatre experiences in an intimate setting, the Stephen F. Austin State University School of Theatre offers its 2021-22 Mainstage Series featuring three outstanding plays presented on the SFA campus and another play presented in the neighboring town of Center.

From comedies to classics, this year’s selection includes something for everyone, according to Cleo House Jr., director of the School of Theatre. This season’s shows include “Bootycandy” by Robert O’Hara; “Ajax in Iraq” by Ellen McLaughlin; “Our Town” by Thornton Wilder; and “The Taming of the Shrew” by William Shakespeare.

“To say that I am excited about this season is an understatement,” House said. “We are producing a diverse range of plays that will be speak to people with a variety of tastes. I am particularly excited about our joint collaboration on ‘Ajax in Iraq’ with Panola College’s theatre department. It’s an idea I had to go beyond articulation agreements and really put collaboration with our community partners into action.

“Griffith Fine Arts Building is still under renovation, so we’ll be in Kennedy Auditorium again this year for three performances,” he added, “but students, staff and faculty have continued to display outstanding ingenuity and adaptability that has resulted in great experiences for our audiences.”

Based on the author’s own experiences, “Bootycandy” is a satiric portrait of American life told through the lens of Sutter, a gay black man on an outrageous odyssey through his childhood home, his church, dive bars, motel rooms and even nursing homes. O'Hara weaves together scenes, sermons, sketches and daring meta-theatrics to create a humorous and daring portrayal of growing up gay and black. The play is suggested for Ages 17+ because of its strong language and mature themes. The play runs Oct. 12 through 16 in Kennedy Auditorium.

Past and present collide in McLaughlin's mash-up of Sophocles' classic tragedy “Ajax” with the modern-day war in Iraq. The play follows the parallel narratives of Ajax, an ancient Greek military hero, and A.J., a modern female American soldier, both undone by the betrayal of a commanding officer. Athena, goddess of war, coolly presides over the whole. Inspired by material collected from interviews with Iraq war veterans and their families, “Ajax in Iraq” explores the timeless struggle soldiers face in trying to make sense of war. The play contains adult language and content. The show runs Nov. 9 through 13 and will be presented in the Community House, 425 San Augustine St., in Center.

Pulitzer Prize-winning drama of everyday life in a small town at the dawn of the 20th century, “Our Town” is an American classic. In it, a “stage manager” guides us through the lives of two families: their daily activities, first love, marriage, death and its aftermath. Young lovers Emily and George, their parents, siblings and colorful neighbors use humor and powerful storytelling in place of traditional scenery and costumes to explore the universal question of what it means to be human. “Our Town” runs Feb. 22 through 26 in Kennedy.

In Shakespeare’s “The Taming of the Shrew,” Lucentio loves Bianca but cannot court her until her shrewish older sister Katherina marries. The eccentric Petruchio marries the reluctant Katherina and uses a number of tactics to make her an obedient wife. Lucentio marries Bianca and, in a contest at the end, Katherina appears to prove that she is the most loyal wife. The play runs April 5 through 9 in Kennedy.

Plans are already in place for the School of Theatre’s 2022 SummerStage Festival, which will feature “Women Who Weave” by J.S. Puller along with “The Jungle Book, Kids,” a children’s musical based on the novel by Rudyard Kipling and the Disney film.