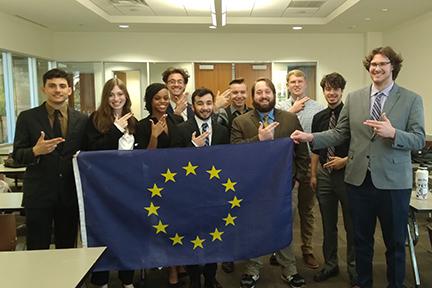 The MMEU Competition, hosted by Indiana University, is the second-oldest intercollegiate simulation of the European Union in North America. According to Dr. Steven Galatas, SFA associate professor of government and SFA Model EU faculty advisor, the competition allows students to immerse themselves in the policies and procedures of the EU.

“The purpose of the MMEU is to provide a hands-on learning experience about how the European Union operates, to work with students from across the U.S. to debate and discuss issues related to the European Union and to promote awareness and understanding of the union and its role in the world,” Galatas said.

SFA’s team comprised 12 students representing two countries: Slovakia and Sweden. The students received their country assignment through a lottery system. Each member prepared for the competition by conducting individual research and then collaborating with their team members and Galatas via Zoom.

Matthew Jennings, who role played as the environment minister of Slovakia, and Hayden Young, who represented the foreign minister of Sweden, each received second place in the competition. Dalton Hice, who played the role of the commissioner for home affairs of Sweden, placed third.

“The competition was a great opportunity to compete with other schools and show that SFA’s political science program can hold its own against other teams,” Young said.

During the course of three days, the students participated in various sessions that showcased their knowledge of their assigned countries’ policies and affairs. Students also had the opportunity to network with peers and establish connections outside the competition.

“The students have worked really hard all semester to prepare for this competition, and I am proud of their dedication to the team,” Galatas said. “Due to COVID-19, I wasn’t sure how well the team would be able to collaborate and work together. However, they quickly impressed me.”

Due to COVID-19 safety precautions, the MMEU Competition was held virtually. More than 25 teams from 21 universities, including several Big 10, ACC, Big Twelve and elite private universities, from 10 states competed.

For more information on Model EU, contact Galatas at galatasse@sfasu.edu.