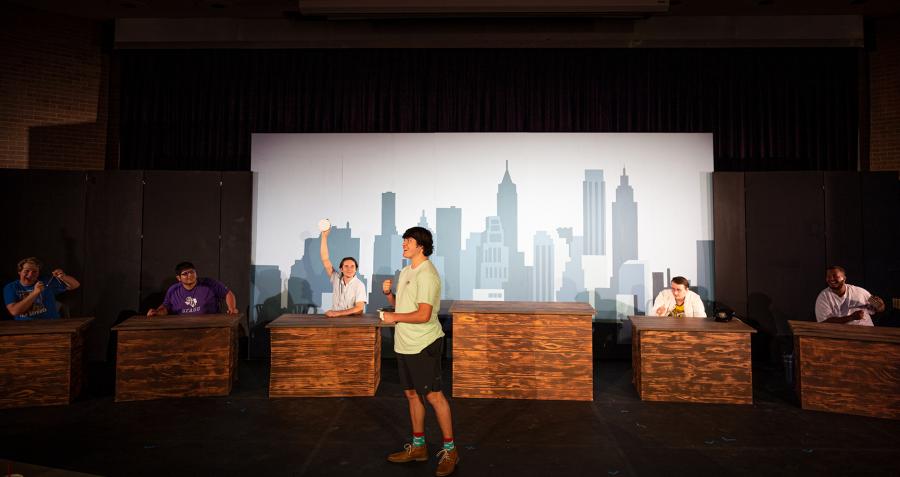 SFA School of Theatre will present the children’s beloved story of “Stuart Little” as part of its annual SummerStage Festival. Rehearsing a scene from the show are, from left, Cutter Day, Log Cabin junior; Jaycob Sanchez, Austin freshman; Adam Lamb, Waxahachie junior; Nathan Morris, Brownsboro junior; Zach White, Buffalo senior; and Andr'e Hankerson, Beaumont junior. “Stuart Little” will be presented at 10 a.m. June 29 and 30 and July 1 and 6; at 2 p.m. June 22 and 24; and at 7 p.m. July 7 in both in-person and virtual performances. General admission tickets are $8. Virtual access is $15. A pay-what-you-can performance is on July 1. All performances are in Kennedy Auditorium on the SFA campus.


NACOGDOCHES, Texas – It’s a play within a play.

That’s how Kristen Blossom, adjunct instructor in the Stephen F. Austin State University School of Theatre, describes the SummerStage Festival presentation of the children’s favorite “Stuart Little,” a play based on the popular book by E.B. White and adapted by Joseph Robinette about the endearing mouse named Stuart Little who is born into an ordinary New York family.

“Stuart Little” will be presented in the style of a 1940s radio play with student actors not only delivering their characters’ lines but also creating their own sound effects live on stage.

The play is one of two featured in this year’s SummerStage Festival presented June 22 through July 9 in Kennedy Auditorium on the SFA campus. “Men On Boats” by Jaclyn Backhaus is also featured.

According to Blossom, radio plays were popular in the 1920s to 1950s, and the novel “Stuart Little” was written by White in 1940, “so it made perfect sense for me to set our production in the 1940s and deliver it to the audience as an old fashioned radio play.”

Historically, actors in radio plays would speak their lines into a microphone while a person in the foley booth made all of the sound effects. But Blossom directs SFA actors do both of these jobs simultaneously.

“The audience will not only be able to hear the sound effects, but also see live exactly how the sounds are being made by the actors,” she said. “My overall concept for this production is that a group of actors in the 1940s come into a studio space in New York City and start using all the foley objects they can find to tell us – the audience – this story about a mouse named Stuart Little. So, essentially, it's a play within a play.”

Blossom wanted the students to “think outside the box” and experiment with different objects to create the sound effects.

“We all had so much fun collaborating,” she said. “Because it's a play within a play, every sound you hear is being made by these 1940s storytellers. For example, we have a record player on stage for times when the script calls for music, and we have instruments that create rain and thunder and other noises.”

Adding to the directing theme, actors will be dressed in 1940s-style clothing with costume pieces that they take on and off while on stage.

Blossom cast only six actors to play the nearly 25 different characters, meaning students will portray between four and five characters each, with the exception of the main character of Stuart. She added that it was “purely coincidental” that it’s an all-male cast.

“That's just the way things turned out in auditions,” she said. “I think gender rarely has anything to do with the heart of a story, so ‘traditional’ casting didn't matter to me at all. I'm so proud of my actors for approaching each of their many roles, even the tiny ones, with precision, sensitivity and authenticity.”

Among the biggest challenges in presenting this play is that Blossom conducted rehearsals remotely via zoom.

“Personally, it's always a challenge for me to verbally articulate what I'm imagining and feeling,” she said. “I tend to get up and walk all over the stage while I'm directing. But I was only able to conduct rehearsals via zoom. It certainly has been a challenge to sit still and give direction only using my words. But, on the bright side, I believe me being remote created more space for the actors and my assistant director, Triston Haq, to assert their own creativity.”

As assistant director, Haq, a Nacogdoches senior, said he’s learned that there aren't any shortcuts to success when it comes to working with people of different skill sets and experience.

“A standard was established from the outset, and everyone, regardless of experience, has risen to the occasion and grown in their own way,” Haq said. “As for learning the specifics of directing a radio play, I've had to hone in on the words and the way that actors say things. Sounding like a real person is something I can direct pretty reasonably after my own training, but when performing a radio drama, I've found that there's more to connecting with the audience than sounding like someone you'd meet in real life. It's about inviting the audience on the journey with you.”

Because there are so many foley sound effects and costume changes that take place throughout the show, the actors have had their endurance and performance ability tested, Haq said.

“But they’ve come out with a great radio play to show for it,” he added. “The process is extremely intentional and precise, and we've been doing our best to hit every beat in the show with honesty and conviction. There's a musicality to the actors' performance that we heard in the beginning read-through, and that's something that we've tried to hold on to and highlight as their performances grew. The students responded to the process and the expectations we set with a headstrong initiative, and we're really proud of their growth and resourcefulness. Theatre is a team effort, and the cast did a great job of relying on each other when they needed.”

Buffalo senior Zach White portrays multiple characters, including Margalo, who is a bird with really high voice; George, who, as the other son in the Little family, has a more shy tone in his voice; along with a few cats, two different doctors and “many others that you’ll be able to see if you come and watch the show,” he said.

“The most fun thing about this show is that there is no limitation to what I am able to do with my characters and discovering how far I can go with them,” White said. “Seeing my colleagues’ reactions to the silliness I can come up with really makes this process fun. The more challenging part of this is mostly trying to keep up with and remember all of the voices that I have for these characters, along with the physicality of the all the characters. The most rewarding part of this process is going to be my part in the escape from reality that we can provide the audience.”

Waxahachie junior Adam Lamb plays Mr. Little, the house cat Snowbell and Narrator #1. Watching and working with talented actors has been a fun part of the rehearsal process, he said.

“The most challenging part was working with a director through zoom and having to be at the whim of our internet connection,” he said. “But the most rewarding part, for me at least, for any show is seeing the audiences’ reactions to what we’ve created.”

“Stuart Little” tells a story about seeing the world differently than most people traditionally imagine.

“There's a lot of wonder to be found when you look around from a perspective that's not your own,” Haq said. “I hope the audience takes a little bit of wonder home with them.”