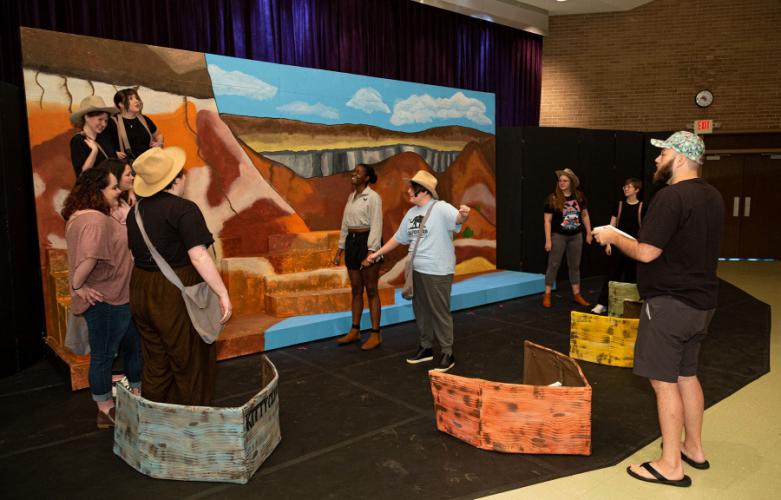 Bobby Britton, far right, a 2017 SFA theatre major graduate, rehearses a scene with the cast of “Men On Boats.” Britton, who teaches theatre in the Brazosport Independent School District, composed the melody for one of the musical numbers in play. “Men On Boats” is a feature of this year’s SummerStage Festival presented by the SFA School of Theatre. It will be presented at 7 p.m. June 30 and July 1, 6, 8 and 9; and at 2 p.m. July 7 and 8. For tickets, call the SFA Fine Arts Box Office at (936) 468-6407 or visit boxoffice.sfasu.edu. For more information, call the School of Theatre at (936) 468-4003 or visit www.theatre.sfasu.edu. All performances are in Kennedy Auditorium, 1906 Alumni Drive.


NACOGDOCHES, Texas –  Want to spend part of the summer with Captain John Wesley Powell and his crew of nine crazy but loyal volunteers as they journey the course of the Colorado River and become the first “white men” to explore the Grand Canyon?

The School of Theatre at Stephen F. Austin State University will take audience members along on a wild adventure when it presents the play “Men On Boats” by Jaclyn Backhaus as part of the SummerStage Festival at SFA.

Directed by Jackie Rosenfeld, senior lecturer in the School of Theatre, “Men On Boats” is the hilarious and true(ish) 21st century mash-up of the original voyage, 10 actors, none of whom are cisgendered male, embody these explorers as they suffer loss of boat and supplies, brave dangerous rapids, name mountains after themselves, and get on each other’s nerves.

Audience members can expect to see “a satirical retelling of the first U.S. government-sanctioned exploration of the Grand Canyon,” Rosenfeld explained, “complete with moments of gut-busting humor and times of tremendous fear and despair. It is heroic and rugged, reflecting on the truths of bravery, teamwork and colonialism.”

Although it is not a musical, “Men On Boats” features several “short ditties” throughout the play that are sung around a campfire at night, according to Rosenfeld.

“In the script we are given lyrics but there is no pre-written music for them,” she said. “Most of the songs are sung by the character Old Shady, who is Major John Wesley Powell’s older brother. I cast junior theatre teacher certification major Hanna Odom in this role and am so thankful for the work she has done in creating melodies for each of her songs.”

In discussing the music, Rosenfeld said she and Odom talked about the mixing of hymns and patriotic tunes along with the music of Americana, like zydeco, country and ragtime before they had names.

“I am not at all musically inclined and have been so thankful at the wonderful work Hanna has put into this,” Rosenfeld said. “In each of the songs is the essence of Old Shady and the world of 1869 on the Colorado River. Early in rehearsals, the rest of the cast began clapping along and tapping their toes as their characters eat dinner around a campfire in the Grand Canyon that they refer to only as the Big Canyon.”

Odom said becoming the character of Old Shady has been “a fun adventure.”

“The idea of singing ‘ditties’ and being a grouch of a man just sounded so amusing to me, and I was lucky enough to get placed with this role in the end,” said Odom, who had not acted since transferring to SFA in the fall of 2020; instead she had been focusing her attention on earning her teacher certification. “Shady is a man of few words, but what he says is written with the true definition of intent, and this includes his songs.”

“I would sing improvised variations of the songs’ melodies in rehearsals, and I knew that when the cast would being to clap along, they seemed to enjoy the direction I was taking,” she said.

Another song in the play that involves most of the cast and is a bit more complicated revolves around a celebration of the recovery of supplies, including an untapped barrel of whiskey, the men find in one of their capsized boats. For this song, Rosenfeld reached out to theatre alumnus Bobby Britton for assistance. Britton, a 2017 SFA graduate, is a long-time musical theatre actor as well as a playwright/composer. SFA theatre Professor Angela Bacarisse and the School of Theatre took his musical play “Closed for Repairs” to the Scotland Fringe Festival in August of 2017 where it was well received.

Britton has since earned a Master of Arts in theatre from Emerson University in Boston, Massachusetts, where he continued writing, arranging and performing for theatre. Currently, he teaches theatre in the Brazosport Independent School District and is in the process of re-launching his cabaret show after the COVID-19 shutdown.

“He, like Hanna, turned to his experience with southern hymns and composed a joyous melody that includes call and response,” she said. Britton recently traveled to Nacogdoches to work directly with the cast teaching them their parts.

“I was very excited about this project when Jackie approached me,” Britton said. “After reading the play and talking with Jackie about the style and essence of the production, I tried to craft something that was fun, stylistically similar, and not too complicated for variously skilled singers. Jackie was able to share videos of the melodies that Hanna had created already so that I could try and support what she had established in the world of the play. I would not consider myself a composer, but I do enjoy creating melodies and exploring the voice.”

“Men On Boats” will be presented at 7 p.m. June 30 and July 1, 6, 8 and 9; and at 2 p.m. July 7 and 8. General admission tickets are $15 for adults, $10 for seniors and $5 for students/youth. This show is recommended for mature audiences because of language content. A pay-what-you-can performance is on July 1. All performances are in Kennedy Auditorium, 1906 Alumni Drive. There are no virtual performances for this play.