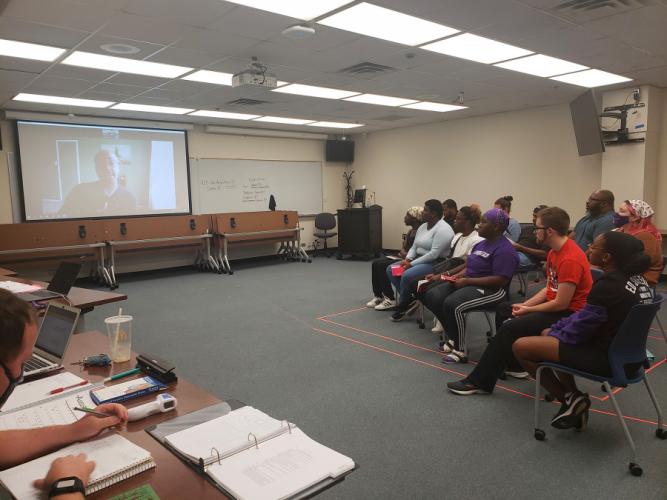 Veteran actor and SFA theatre alumnus Xzavien Hollins discusses via Zoom his stage career, specifically being cast in the role of a Black queer male in The Catastrophic Theatre’s presentation of Robert O’Hara’s play “Bootycandy,” with members of the SFA cast of the upcoming production of “Bootycandy.” 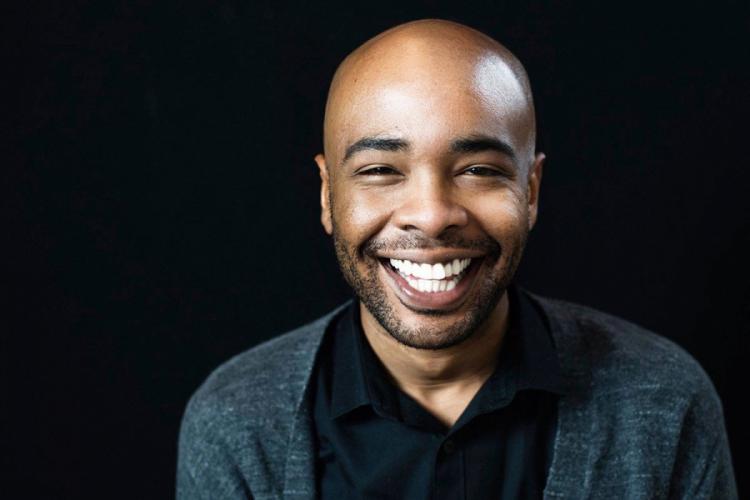 
NACOGDOCHES, Texas – “Different lifestyles exist, and their stories should be told … even in East Texas.”

That was the response from Houston-based actor Xzavien Hollins when asked the question: Why do you think it’s important to present plays like “Bootycandy?”

The School of Theatre at Stephen F. Austin State University will present Robert O’Hara’s play “Bootycandy” at 7:30 nightly Oct. 12 through 16 in Kennedy Auditorium on the SFA campus. The hilariously funny and provocative story presents a satiric portrait of American life told through the lens of Sutter, a gay Black man on an outrageous odyssey through his childhood home, his church, dive bars, motel rooms and even nursing homes. Based on O’Hara’s own experiences, “Bootycandy” weaves together scenes, sermons, sketches and daring meta-theatrics to create a colorful portrayal of growing up gay and Black.

It’s a story of which Hollins easily relates; it’s a character he’s portrayed; it’s a play that deeply moved him and motivated him to start writing his own work and begin reading and researching works not widely produced.

At the beginning of 2019, The Catastrophic Theatre in Houston produced “Bootycandy,” and Hollins, a 2010 SFA theatre alumnus, was cast as Sutter, the protagonist of the comedic coming-of-age play that “explores issues most would consider taboo,” he said. Because of Hollins’ extensive on-stage experience, and specifically for his portrayal of Sutter, School of Theatre Director Cleo House Jr. invited Hollins to share his valuable insight into the play with the SFA cast of  “Bootycandy” during a recent Zoom session.

“When I first read the play, I cried, and I and cherished the idea that I would portray someone that was so close to my life,” Hollins said. “O’Hara beautifully writes a contemporary story lived by so many of us but never actually seen on stage. It made me think of how many stories we are missing out on as a community, and how many of our audiences are suffering at the hands of an unwilling administration?

“I can honestly say audiences love this play because it’s the perfect ‘dramady’ – part drama, part comedy,” he said. “It’s about everyone’s insecurities and how quickly we can forget about those insecurities to achieve a goal. My experience performing in this play caused me to begin writing my own work and reading and researching works not widely produced. We need more stories about our community. I urge theatre students to start writing, even if it’s horrible. Trust me, the world needs the content.”

Hollins has more than 25 years of theatre experience with 11 of those spent on Houston-area stages. Among his credits are “Bootycandy,” “Speeding Motorcycle,” “Toast,” “Snow White,” “Middletown” and “Fleaven,” as well as seven Tamarie Cooper (actor, playwright, director, choreographer) productions, with The Catastrophic Theatre; “Well” with Mildred’s Umbrella Theatre; “Swann” with Stingaree performance art theatre; “The Government Inspector,” “The Tempest,” “White Snake” and “The Triumph of Love” with Classical Theatre Company; “Julius Caesar,” “Aida” and “Fidelio” with Houston Grand Opera; “Radio Gold,” “A Christmas Carol,” “The Government Inspector” and “7 Keys to Slaughter Peak” with Milwaukee Repertory Theatre; “Slammed” with Milwaukee Repertory Education Department; “Hay Fever” and “The Play’s The Thing” with Ten Chimney’s Foundation; “Among The Thugs” and “Essential Self Defense” with Horse Head Theatre Company; “The Redemption Series” with The Landing Theatre; “Our House” with Black Lab Theatre; “God and Death” with Back Porch Players; and “A Soulstice Event” with Houston Arts Alliance. He is also a Theatre Under The Stars (TUTS) Tommy Tune mentor to high school musical theatre students in the Houston area.

Hollins recalls his time at SFA as “jammed packed with happiness and strong life lessons that I will never forget,” he said.

“I had a very diverse group of friends,” he said. “When I think back, I’m actually surprised by the amount of diversity I encountered. Unfortunately, the programming wasn’t as inclusive as I would have liked it to be.”

Most plays presented on the SFA Mainstage Series followed the idea that a minority’s “place” in theatre is to be lumped in with servants, maids and butlers, and that a minority’s culture didn’t exist or wasn’t to be explored in depth on the Mainstage, he said. “It was as if black box theatre, which was spear-headed by students, was the only place to explore our cultural differences and nuances, which is why producing a coming-of-age play about a queer black male on the SFA Mainstage is so important. I want to thank the School of Theatre for taking steps toward a more inclusive environment.”

Since his time as a theatre student, Hollins said he has learned that people are capable of being successful in professions one might never have thought possible – an observation he shared with the current SFA “Bootycandy” cast.

“After graduating, you’ll discover the roommate who had all the leading roles might be a lawyer in 10 years, or the techie in the shadows developed himself into a leader at a major shipping company,” Hollins said. “One of my best friends graduated pre-law before completing a nursing degree for good measure. So when I get asked how SFA School of Theatre prepared me for a career in acting/theatre, I say: I learned to expect the unexpected, because you will always be looking for that next job. And that’s okay, because a majority of people are doing the same. Get comfortable being uncomfortable.”

“Bootycandy” contains mature themes and language that may be triggering for some viewers.