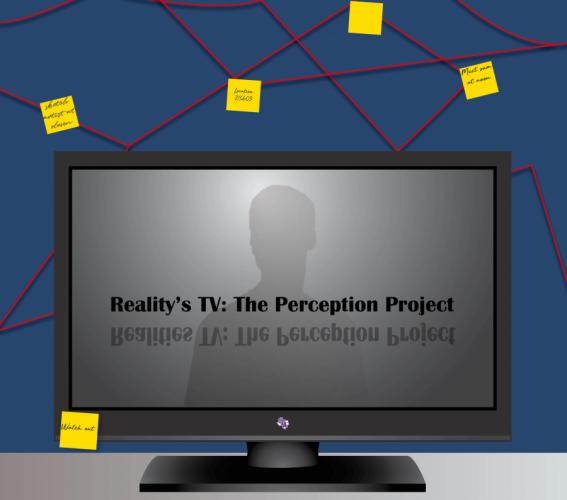 “Reality’s TV: The Perception Project” was created by SFA theatre students as an interactive adventure. It will be presented virtually at 7:30 p.m. Thursday through Saturday, April 1 through 3. Visit boxoffice.sfasu.edu or call  (936) 468-6407 to purchase access.

“Reality’s TV: The Perception Project” was created by SFA theatre students as an interactive adventure designed to be entertaining and potentially change public perception of what theatre is and can do, according to Dr. Slade Billew, assistant professor of acting and movement and the project director.

“The show, which was created purely by the creative team, explores questions of reality and power,” Billew said. “It engages with the idea that forces beyond our control shape many of the experiences we have and how we perceive our reality.”

The students wanted to create a show that was a uniquely Zoom experience, Billew said.

“We have all seen a lot of Zoom theatre in the last year, and we wanted to do something that wasn’t just live in Zoom, but actually used the interactive nature of the medium to invite the audience into a more complicated experience of the show.”

“Reality’s TV: The Perception Project” is a form of devised theatre, which can “look like a lot of different things,” according to Billew.

“Some of it is very experimental, and some if it looks like a standard play or musical,” he explained. “A driving force in our process was to create a piece that was neither a play done online nor a low-tech movie, but rather a unique audience interactive experience specifically conceived for the medium of Zoom.”

Devised theatre is a constant process of thinking big and broad, and then narrowing down to specific choices, Billew said.

“A lot of work gets created and then abandoned, not because its bad, but just because it doesn’t fit in some way,” he said.

The process is also a form of what the dance theatre company Pilobolus calls “radical democracy,” meaning many of the traditional hierarchies of a rehearsal process are eliminated or minimized. The performers comment about design and rehearsal process, and the designer and management team provide input on the performance choices and staging. Billew, as director, served less as the creator of a vision for the show and more like a project manager, guiding the team through idea creation and decision making while minimizing his own power as a faculty member as much as possible, “so that the voice of the group could come through clearly,” he said.

“This show is so much fun and full of unexpected turns and mysterious characters,” said Astrid Maldonado, freshman theatre major from Katy. “We have all worked so hard to turn this into an amazing event, and I recommend everyone watch and take part with us.”

Ty Carter, senior theatre major from Beach City, said he was most excited to observe how the rehearsal process explored and researched new ideas and Zoom room restrictions.

“It’s a great learning experience to devise with all of the other artists and bring everything together as a piece,” Carter said. “People should see the show because it’s a fresh view of the conference room as well as seeing what can come from scratch.”