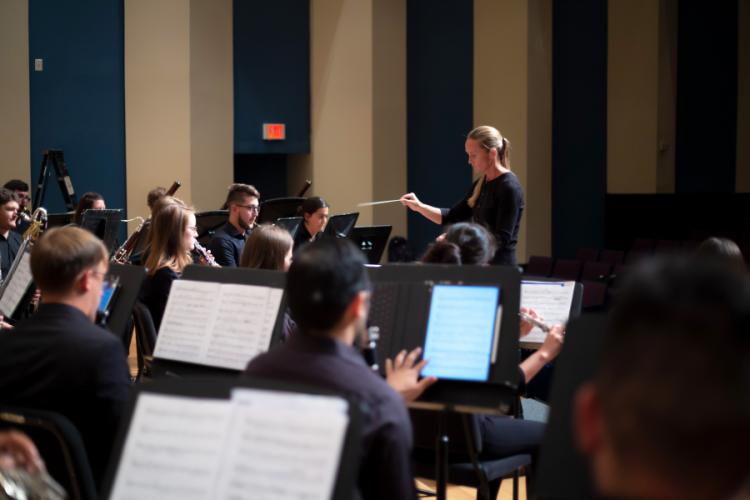 SFA Director of Bands Dr. Tamey Anglley conducts the Wind Ensemble, which will perform at 7:30 p.m. Tuesday, Oct. 12, in the Grand Ballroom of the Baker Pattillo Student Center on the SFA campus. Admission is free.


ACOGDOCHES, Texas – The Wind Ensemble at Stephen F. Austin State University will present the program “Solace” when the band performs at 7:30 p.m. Tuesday, Oct. 12, in the Grand Ballroom of the Baker Pattillo Student Center on the SFA campus.

Under the direction of Dr. Tamey Anglley, director of bands at SFA, the ensemble will perform works by Percy Grainger, Emmanuel Chabrier, Donald Grantham and guest composer Joel Love.

The concert opens with Grainger’s “The Duke of Marlborough Fanfare” for brass and percussion written in 1939 from an English folk song about personal dedication and pride in battle. “It served as an outlet for Grainger’s sadness and frustration of having to flee England before the outbreak of World War II,” Anglley explained.

Chabrier composed “Marche Joyeuse” for piano in 1885, but it was orchestrated in 1888. Legendary Texas music educator Fred Junkin arranged the march for wind band in 1998.

“Baron Cimetiere’s Mambo,” written in 2004 by Grantham, is based on the voodoo spirit who is the keeper and guardian of cemeteries and is “usually pictured in a dark tailcoat and tall dark hat, like an undertaker, and is a notorious mocker and trickster,” according to Grantham. Guest composer Love studied composition with Grantham at the University of Texas at Austin from 2010 through 2014.

Wind Ensemble will perform its first piece by Love, “Solace: A Lyric Concerto” for Solo Alto Saxophone and Wind Ensemble. The alto saxophone soloist will be Interim Director of the School of Music and Professor of Saxophone Dr. Nathan Nabb. “‘Solace’ is in five movements where each movement meditates on a mood: joy, besieged, gratitude, hiding and work. The saxophone is challenged to play lyrically in extreme registers while playing virtuosic passages in five unique sound worlds,” according to Love.

The Wind Ensemble will close its first concert of the season with Love’s “Indigo Train.” This piece, written for Love’s high school band director Gary Wells, takes its inspiration from trains due to Wells growing up around trains. “Trains inspire images of the Deep South and the rich history of the blues, which was born there and eventually traveled up the Mississippi to Chicago,” Love said. “I imagined a person quickly traveling through railcars, experiencing a slightly different music in each.”

Admission to the concert is free. Other upcoming band concerts include the Wind Symphony and Symphonic band performing at 4 p.m. Sunday, Oct. 17, and the Wind Ensemble, Wind Symphony, Symphonic Band, Percussion Ensemble, Trombone Choir and the SFA Faculty Brass Quintet presenting the Kaleidoscope Concert at 7:30 p.m. Tuesday, Nov. 16, all in the Grand Ballroom of the student center. For additional information, contact the School of Music at (936) 468-4602.