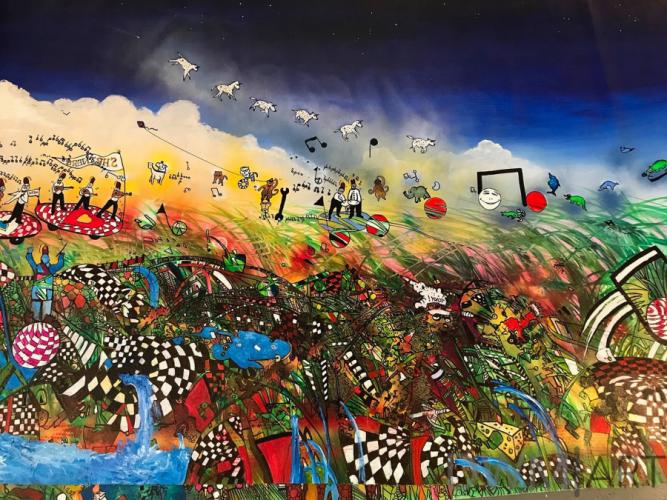 Works by David Masterson are featured in the exhibition “A Mind Stretched by New Ideas Never Regains its Original Dimensions” showing April 10 through June 12 in The Cole Art Center @ The Old Opera House in downtown Nacogdoches.

The exhibition, titled “A Mind Stretched by New Ideas Never Regains its Original Dimensions,” will feature abstract and impressionist large-scale paintings and some sculptures. The works to be displayed are part of two painting series that Masterson has been exploring in the past few years. The "David’s World" series started as a whimsical, fantasy land for children, with the goal of placing paintings in children's hospitals where they would evolve with the patients' input.

The second is Masterson’s "Push Series,” which emerged following a devastating family tragedy. The exhibition is dedicated to his grandchildren, Mason, Tori and Ella, who died in a horrific automobile accident in 2020. His son, the driver of the vehicle, survived but was seriously injured. Initially, after the accident, at which he and his wife were first responders on the scene, Masterson said he thought he would never paint again. But there eventually came “a divine moment” where he felt “pushed to the canvass, and I began to create art like I had never created before.”

“The Push Series started about three months after the accident,” Masterson said. “Day after day I would try and paint, but nothing was there. One day as I stood in front of my painting wall and a fresh 6 x 8 foot white canvas that waited for me, it happened. The kids came down with angels and we all talked and hugged. It was a magical, spiritual moment that is hard to find words to describe. Then Ella ‘pushed’ me towards the canvas and whispered in my ear … ‘paint Poppy.’ So I did. But not like I used to. I needed something to work inside me that would allow the pain and suffering to come out … a space to figure things out, or perhaps not figure out. But I had discovered a process in which, when alone, I could think things through at my own pace, through my art…  Day after day, hour after hour, I would allow myself to become a river, float gently downstream over any and all obstacles … and then become calm, still waters again.”

The “David’s World” series, a project he’s worked on for 20 years, hosts a full array of animals, insects and shapes. It’s a world where people can lose themselves and find magic and mystery, creating their own story as they take in the painting, he said. Unbeknown to children or their families, Masterson often consults with hospital staff at various children’s hospitals to learn certain aspects of a particular child’s life, like a family pet or a favorite toy. Then he paints those objects into one of his giant paintings to personalize it, and the next time the family visits the hospital, they’re in for a colorful, heart-warming surprise with one of his paintings on the hospital wall. He donated four large paintings last year to the burn unit at Shriners Children’s Texas in Galveston.

“Ideally, I envision my David’s World Series on display in children’s hospitals all over the country as a therapeutic alternative for children and their families,” he said. “Children can stare at a  ‘David’s World’ painting and be taken to a place in their imagination that is theirs and theirs alone, as they sit and wait for procedures or lay in their hospital bed, or perhaps in common areas where friends and family can gather and explore paintings filled with color and images.”

Masterson attended SFA where he majored in fine art and minored in interior design. He says he is mostly self-taught but credited art professors Gary Parker, Piero Fenci and the late John Daniel for guiding him. Masterson has painted in locations throughout the world, including the Amazon, Negro and Rhine rivers, Thanksgiving Tower, atop a 47-story Dallas skyscraper, along the streets in Amsterdam, stretching a canvas as the sun set on the Nāpali Coast in Hawaii, all the while looking to see how far he could take his craft.  Prior to the pandemic, Masterson was showing in multiple juried art fairs across Texas, earning Best of Show in juried shows in Turtle Creek in 2018 and in New Braunfels in 2019. His work resides in many important private collections.

Masterson resides in Center where he operates Davmar Gallery in a renovated 1903 bank building on the downtown square. For more information, visit davidwmasterson.com.

Masterson will be in Cole Art Center to discuss his work during Blueberry Festival, Saturday, June 12.  The show runs April 10 through June 12 and is sponsored in part by the SFA Friends of the Visual Arts, William Arscott and the Nacogdoches Junior Forum. Admission is free.