SFA’s presentation of ‘The Maids’ continues despite pandemic, weather delays 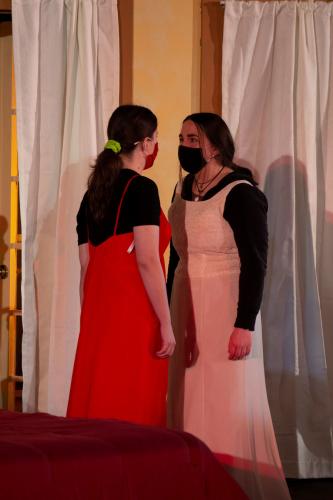 SFA School of Theatre student actors, from left, Hannah Marfin, San Antonio freshman, and Dani Wilson, Aubrey sophomore, rehearse a scene from Jean Genet’s “The Maids.” The play will be presented at 7:30 p.m. Feb. 26 and 27 and at 2 p.m. Feb. 27 and 28, virtually and in-person in Kennedy Auditorium on campus. Purchase tickets/virtual access at boxoffice.sfasu.edu or call (936) 468-6407.


NACOGDOCHES, Texas – It’s difficult enough that Stephen F. Austin State University theatre students are having to take extra precautions to socially distance and stay safe while rehearsing and preparing for this week’s School of Theatre presentation of Jean Genet’s “The Maids.”

Add to that an unprecedented winter storm that caused the campus, the city and most of Texas to essentially shut down for a week. That meant a full week of rehearsal time was lost, not to mention the additional stress that endless days without electricity, water and, in some cases, hot food, caused for students.

But SFA theatre students and their faculty leaders have regrouped and made adjustments to overcome these newest obstacles to make sure that the show goes on. “The Maids,” originally slated to open on Feb. 23, will now open at 7:30 p.m. Friday, Feb. 26, in Kennedy Auditorium on the SFA campus with additional performances at 2 p.m. and 7:30 p.m. Saturday, Feb. 27, and at 2 p.m. Sunday, Feb. 28. Virtual access may also be purchased.

Plans for a Feb. 14 load-in at Kennedy Auditorium were cut short because of the oncoming inclement weather, and very little could be done in subsequent days to get ready for a traditional opening night, according to Rick Jones, professor of theatre and the show's director.

“We weren't able to do much of anything,” Jones said. “Instead of having all day Sunday, the 14th, to load the set into Kennedy Auditorium, hang and focus lights, etc., crews got sent home at lunchtime. We were able to do ‘paper tech’  – when the director, designers and stage management staff plan out what lighting and sound cues will be happening and when – that afternoon via Zoom, but we had to cancel the rehearsal that night, and we didn't get back to work until Monday, the 22nd. In fact, the actors ended up going 11 days between rehearsals. Just about the only good thing to come out of this was that the actors had a little more time to work on lines, think about characters, and so on.”

The show has only three characters, and because of the pandemic, there was a chance that one or more student actors could be exposed to COVID, so Jones decided to use understudies in another precautionary measure to make sure the show could continue. “This way, we’ve got someone to step in as needed,” he said. “There are also fewer Mainstage roles this semester than there often are, so, since we’re guaranteeing everyone a performance (assuming health, etc. allows), we’re actually giving more student actors an opportunity to work with an experienced director on a Mainstage show.”

Jones has seldom used understudies in the plays he’s directed during his 20-year tenure as a theatre professor at SFA. He believes that not casting actors as understudies frees them up for other productions.

“For example, acting in our very active student productions program will likely be more rewarding than simply being available for a Mainstage show, if needed, ” Jones said. Additionally, rehearsing understudies takes time away from rehearsing a regular cast.

“We said this almost every single day in rehearsal: this show is a beast!,” Lesseig said. “This has been, by far, the largest amount of lines I’ve had to memorize for a show, let alone the longest monologue I’ve ever had to memorize and perform. Additionally, the mental states of the maids themselves are rocky at best – I couldn’t tell you with full confidence what’s real, what’s in their mind, or what’s just part of their sadistic game. Navigating a show like this has been simultaneously terrifying and exciting.”

Marfin echoed her fellow actor’s thoughts on deducing what is real and what is not in the characters’ minds.

“The maids have their own fantasy world where they are Madame and another world where they tend to Madame's every need,” Marfin said. “You start to question what is real, as the maids themselves are severely mentally unstable. What have they created? Is their fantasy their actual reality? Many of these questions have popped up and it makes the journey very exciting and fun.”

Under normal circumstances, a cast and crew would have at least one rehearsal (often several) in a performance space before three technical rehearsals, and then three dress rehearsals. The winter storm changed that.

“This week, our first time on the Kennedy stage, the first time most of the actors will have even seen the set or even the actual furniture, will be our one and only technical rehearsal,” Jones said. “Then we'll have two dress rehearsals, but because of the way we've double-cast the show, that's only one per actor. Luckily, the people who are in the rehearsal room every night – the actors, assistant director and stage managers – are all looking at this as a challenge. Their determination is impressive, even inspiring. And the literally dozens of other people who make the show work – the designers, technical crews, front of house staff – all seem to have adopted the same attitude.  ‘The show must go on,’ and all that.”

But there are valuable lessons to be learned in the face of adversity.

“If there's one attribute you need to succeed in the theatre, whether in the commercial world or in an educational venue, it's toughness,” Jones said. “There will inevitably be rejection, there will always be challenges outside your control. What do you do? Knowing that you can adapt, having the confidence that you can overcome – these are essential in the theatre, and they're the sort of ‘soft skills’ that translate well into any professional environment.”

Patrons who attend the show in person will be required to wear face coverings and socially distance themselves from other audience members not in their immediate group. The play is recommended for mature audiences.