SFA’s presentation of ‘Our Town’ to feature contemporary perspective 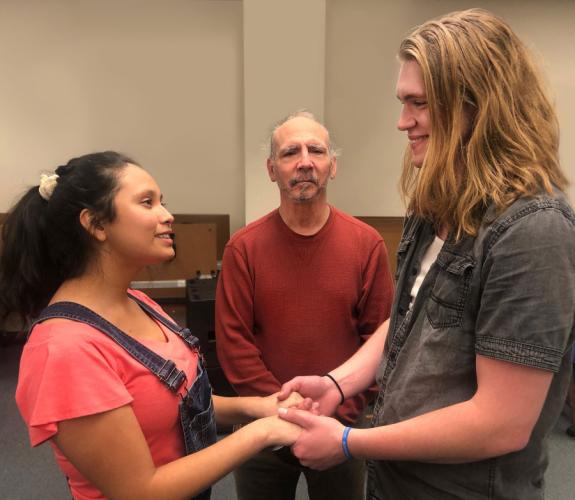 The SFA School of Theatre will present Thornton Wilder’s “Our Town” at 7:30 nightly Tuesday through Saturday, Feb. 22 through 26, in Kennedy Auditorium on the SFA campus. Rehearsing a scene are, from left, Astrid Maldonado, Katy sophomore; Bill Small, Nacogdoches graduate student; and Drake Willis, Nacogdoches senior.


NACOGDOCHES, Texas – “A fresh look at everyday life here and now” is what theatre patrons will experience when attending the Stephen F. Austin State University School of Theatre’s production of Thornton Wilder’s award-winning play “Our Town.”

Presented at 7:30 nightly Tuesday through Saturday, Feb. 22 through 26, in Kennedy Auditorium on the SFA campus, “Our Town” is a winner of the Pulitzer Prize for Drama, Drama Desk Award for Outstanding Revival and Tony Award for Best Revival. The play is universally acknowledged as a classic of American drama. It tells the story of the fictional American community of Grover’s Corners in the early 1900s through the everyday lives of its townspeople.

Although “Our Town” is one of the most-produced plays in the world, Theatre Professor Scott Shattuck has never before worked on it. However, he has seen it twice, and although he liked both productions, it was one conceived by acclaimed theatre director and stage, film and TV actor David Cromer that “had an enormous influence on my understanding of the play,” according to Shattuck.

“Cromer eschewed period costumes and regional accents and made the play more immediate, intimate and authentic than I had ever imagined it could be,” he said. “Sitting in that Off Broadway audience, it was suddenly unmistakable to me that the play is as much about Nacogdoches – or El Paso or Savannah or Seattle – as it is about Peterborough, New Hampshire, which is the village some believe is the model for the play’s fictional small-town setting.”

Cromer won the Lucille Lortel Award and Obie Award for his direction of “Our Town.” He also had the role of the Stage Manager, who narrates the play.

Shattuck’s first experience seeing “Our Town” live on stage was in 1990 at Arena Stage in Washington, D.C., featuring the character actor Robert Prosky in the central role of the Stage Manager. Prosky, who most may remember as the desk sergeant in the TV show “Hill Street Blues,” was one of those actors who bring “intangible but undeniable depths of humanity to every part, a quality in evidence in that performance,” Shattuck said. Famous Stage Managers in Broadway revivals have included Henry Fonda and a late-career Paul Newman.

“It was hard to picture a typical college student in this role,” Shattuck said. “Fortunately, Bill Small, a part-time graduate student who has played the Stage Manager before, turned up at our auditions and we could instantly see that he brings a similar depth of soulful experience.”

Influenced by Cromer’s vision, the “Town” that SFA theatre-goers will see will look and sound like “Our” “diverse, unpretentious city and campus,” Shattuck explained.

“I asked each actor to speak in their own way, rather than affecting a New England dialect,” he said. “Our costume designer, Angela Bacarisse, immediately understood and embraced this approach and developed a look for the cast that is both subtle and timeless. We’re not looking to transport the audience a century and half a continent away, but rather to invite them into a fresh look at everyday life here and now.”

Shattuck said Cromer’s production climaxed with “the most moving ‘coup de theatre’ I have experienced in 50 years of playgoing.”

“Our resources do not allow us to match that precisely, but we have a surprise in store for the audience which is very much inspired by Cromer,” he said. “We hope it will help to give Wilder’s masterpiece its due in our modest venue.”