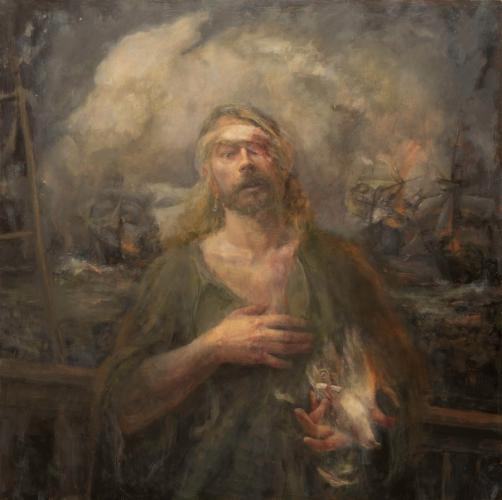 The World Wide Kitsch Competition is a an annual international competition of classical paintings. Hundreds of painters compete across the globe but only a select group make it to the finalist category. This year’s jurors included Öde Nerdrum, a Norwegian painter and son of Odd Nerdrum, founder of the Kitsch movement; Marjan Bakhtiarikish, an Australian painter and winner of the WWK competition in 2020; and Cheng Wu, a Chinese painter. Winners are selected by jurors, but the People’s Choice Award is selected by public voting through social media.

As the first place winner, Roberts won a travel certificate for an interview at Cave of Apelles and the Kitsch bronze locket. In addition, first and second place were awarded the book "Kitsch More Than Art" by Odd Nerdrum, Jan-Ove Tuv and others and the first edition of Sivilisasjonen Magazine. The Cave of Apelles is a talk show surrounding long-form conversations on classical culture, myths and philosophy, according to information at Caveofapelles.com. It has its name from the Greek painter Apelles, considered the greatest of the ancient old masters and a source of inspiration to artist titans such as Rembrandt, Velasquez and Odd Nerdrum, according to Roberts.

“Winning the award is a true honor for me, because I am competing against the best painters in my field, many of whom I truly admire and hold a great deal of respect for,” Roberts said. “To win the WWK Competition has been a dream.”

Chris Talbot, director of the SFA School of Art, is appreciative that Roberts is getting “such high-level recognition” for his work.

“He works very hard and makes large, ambitious and complicated paintings,” Talbot said.  “He is an inspiration to his students both in his example as a successful artist and in the attention that he dedicates to them in the classroom.”

Roberts said that Kitsch is “an international movement” made up of classical painters. It incorporates techniques of the old masters with narrative, romanticism and emotionally charged imagery. The movement defines Kitsch as synonymous with the arts of ancient Rome or ancient Greece, the Renaissance and Aristotelian philosophy. Kitsch painters embrace Kitsch as a positive term, not in opposition to “art,” but as its own independent superstructure.

Though not connected to the WWK competition, Roberts has also been invited to do a month-long residency at the studio of Odd Nerdrum. In order to receive the invitation, Roberts had to apply by making a self-portrait from life and ship the work to Norway along with a paragraph talking about his work for review.

“I have always admired great painters and storytellers,” Roberts said, “specifically how works made hundreds or thousands of years in the past still hold such powerful meaning and influence over me. Perhaps this is what led me to become a painter. Much like my influences, I strive to bring a timeless narrative filled with pathos, sentimentality and sensuality to my work.”

Roberts believes storytelling through various artistic forms is more relevant today than ever, “in our chaotic times.”

“As a society, we have mainly become self-absorbed in digital worlds with our devices,” he said. “Social media has replaced meaningful relationships, detached us from or distorted our realities and, in my opinion, destroyed our empathy for one another. It is easy to dehumanize and to be dehumanized. One might argue that a lack of empathy has played a significant role in the dire circumstances we currently face each day. Precisely what I want to reintroduce to my audience through universal stories is empathy.”

Roberts employs various techniques and methods in his paintings to construct realism. He explains that the goal is “not a photographic representation, but to convey a visceral moment that feels like a lived experience. I observe, adapt and combine approaches that I find in the great works of masters stretching from Hellenistic Greece to the Baroque periods.”

He said he does not paint a picture, but instead paints “a moment in motion, a story or a dream.”

“I'm fascinated by the history of objects and their stories,” Roberts said. “I want my paintings to have that same sense of wonder. I think this kind of sentimentality is a common experience to which we all can relate. To enter the eternal realm of the universal, one must ignore the individual's voice and step outside of personal expression, strip the work of one's individualistic views and time and replace it with a sense of common individuality. To acknowledge a pastness of the present, something that all humans from any time can relate to, you then achieve something universal and outside of yourself.

“The painting becomes better than the painter,” he said. “I have chosen a difficult path filled with goals I may never achieve, but the journey is well worth the sacrifice for me.”