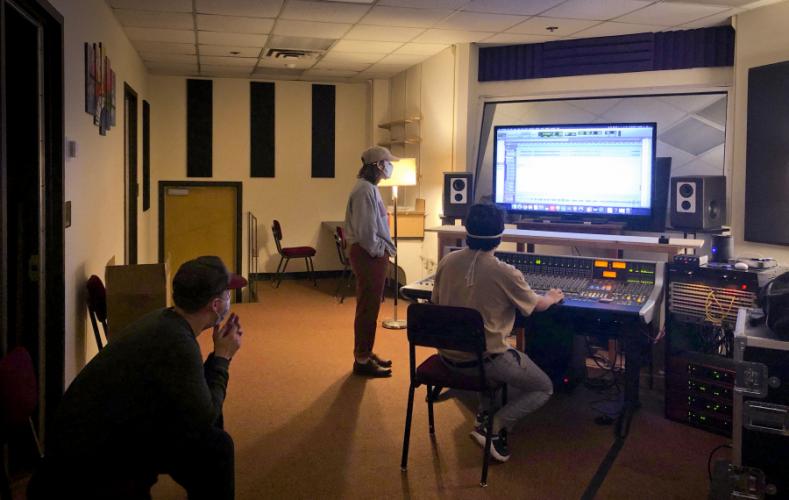 Use of the Dante networking platform in the COVID era has enabled safe social distancing for SFA Sound Recording Technology students while still providing them with real-life studio experiences with a more robust digital production.

The article explained that by using a Dante-backed audio-over-IP system, SRT could alter workflow so multiple students were actively engaging with a production – allowing for more hands-on educational opportunities.

After using Dante through a full semester of COVID classroom social distancing this past fall, the SRT program has provided a different kind of success story for the global leader of professional digital audio networking. SFA SRT has demonstrated how use of Dante in a pandemic enables safe social distancing while still providing students with real-life studio experiences.

As a result, Audinate has again recognized SRT with another nationally published article, keeping the SFA program in the industry limelight and its students in the forefront as highly knowledgeable and skilled potential employees.

James Adams, assistant professor in SFA’s School of Music and director of the SRT program, facilitated campus integration of Dante over the past few years because he not only wanted to enhance university technology, he also wanted to heighten instructional offerings at SFA.

“The traditional workflow for performance was your standard front-of-house endeavor,” Adams was quoted in the first Audinate article. “It worked, but it wasn’t flexible, and it wouldn’t allow us to get additional technologies or students involved.” By converting to a Dante-backed audio-over-IP system, Adams was able to significantly alter the workflow so multiple students were actively engaging with the production – allowing for more “hands-on educational components and a more robust digital production,” the article explained.

Now, the Dante platform has also proven itself as an effective means to connect students musically while they are isolated in studio control rooms as a safer means of social distancing.

“In these times where COVID transmission prevention is one of our top priorities in the studio, I have learned how fortunate we were to already be working with a technology that could easily adapt to our new needs,” Adams said. “In the past, Dante-enable technologies helped us overcome hurdles presented by standard, analog audio equipment. During COVID, the value and flexibility that Dante grants us has been realized on a whole new level, keeping in mind that this is also only made possible by our institution’s existing and vast ethernet systems.”

Like many programs that were previously housed in the Griffith Fine Arts Building on campus, SRT had to relocate last summer as demolition began at Griffith to make way for a long-awaited fine arts expansion initiative. SRT is temporarily housed in the Robert McKibben Building in a former TV studio built in the 1970s for broadcasting lectures.

“The layout of the rooms in our temporary space is not like a recording studio,” Adams said. “A recording studio typically has a control room with a big window that looks into the ‘tracking’ room, which is usually a room large enough to fit a band. Sometimes we have auxiliary isolation rooms that we typically use for vocals or to isolate amplifiers and certain instruments. Music spaces are designed for musicians to be together to create music. Well, in the time of COVID, we need individuals separated or in completely different rooms. Our temporary space just so happens to have several separate rooms in addition to one large one.”

In pre-Covid times, before face masks and social distancing mandates, these temporary spaces would not be ideal for how music is usually recorded and produced. But now, the space is actually better for delivering a safe recording arts education than the previous space, Adams explained.

“Because of the separate rooms, we are able to isolate the individual performers that need to be,” he said. “For example, we can place a vocalist in one room and a saxophonist in another. We can completely separate the ‘wind-powered’ instruments and voices from each other. Non-wind instruments can safely be in the larger room together where they can socially distance.

“Dante-enabled technologies made connecting these isolated rooms to our control room simple, fast and easy,” Adams explained. “It is also incredibly stable and reliable.”

Last fall, Adams’ department was utilizing a total of 250 Dante signals. But, he told Audinate he expects that count to go up as the university begins to consider the use of audio-over-IP networking outside of the music department.

“The IT department is looking to us as a model for AV right now,” Adams said in the Audinate article. “I’m getting asked daily about how we successfully solved our social distancing challenges. There are a lot of ideas about what our system will look like long term.”

Michael Coffee, deputy chief information officer for Information Technology Services at SFA, said it was helpful to see how the Dante technology worked across the network.

“I don’t know if we are going to implement that type of technology any time soon, but it will be considered when we do our next iteration of classroom upgrades,” he said.

In the renovation and new construction planned for Griffith Fine Arts Building, SRT’s new facilities will be completely connected by a Dante network.

“We learned a lot last semester about how flexible and scalable Dante really is,” Adams said in the article. “People can still achieve a lot of great things if they can’t see each other. If they can hear one another, and there is minimal delay, then that is definitely enough. We’re at such a negligible delay right now that we can perform small concerts together. It’s very exciting.”