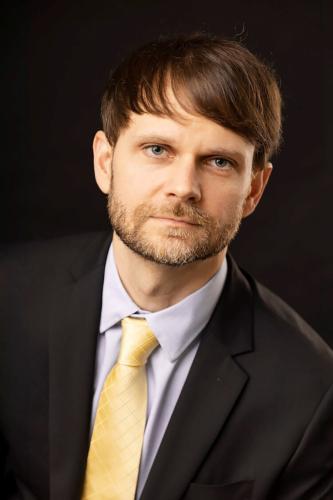 
NACOGDOCHES, Texas – The Wind Symphony and Symphonic Band at Stephen F. Austin State University will perform at 4 p.m. Sunday, Oct. 17, in the Grand Ballroom of the Baker Pattillo Student Center on the SFA campus.

The student ensembles’ performances are part of Brass Day at SFA. Brass Day is devoted to high school students of all ages who play a brass instrument, including trumpet, horn, trombone, euphonium and tuba, and who are interested in learning more about how to perform the prescribed audition etudes for all-region and all-state bands. The concert will open with a performance by the Faculty Brass Quintet.

Additionally, the concert will also feature works by composer Joel Love, who will collaborate with School of Music students in mid-October as part of the SFA bands’ annual composer residency. The Symphonic Band, directed by Assistant Director of Bands Dr. Chris Kaatz, will begin its performance with William Latham’s “Brighton Beach.” Kaatz describes this British-style march as a staple in the repertoire, “likely due to its ominous D minor opening and bold F major finale.” Dana Wilson’s “Sang!” follows and showcases the composer’s eclectic, yet rousing use of jazz harmony and popular music riffs in his writing. This groove-saturated soundscape is succeeded by the sneaky and somewhat sinister “Baron Piquant on Pointe.” Beginning quietly and featuring numerous soloists before employing the full ensemble, this piece was written by University of Texas at Austin Professor of Composition Donald Gratham. Symphonic Band concludes its performance with a work by Gratham’s student, Love. “‘A Cardinal’s Hymn’ embodies Love’s trademark lush, technical lyricism,” according to Kaatz. The work, whose title is a reference to Love’s undergraduate mascot, is an homage to Dr. Wayne Dyess, who was an influential mentor to Love during his studies at Lamar University.

The Wind Symphony, directed by Associate Director of Bands Dr. Dan Haddad, will open the second half with John Mackey’s bombastic tour de force, “Until the Scars.” The colorful orchestration of famed Italian composer Ottorini Respighi is featured next in his sole work for winds, “Huntingtower Ballad.” Love’s “Aurora Borealis” serves as the cornerstone for the Wind Symphony’s program. It is the composer’s first work for wind ensemble and was selected as a finalist in the 3rd International Frank Ticheli Composition Contest. Love’s grand evocation of the northern lights is complimented by Percy Grainger’s raucously energetic “The Gum-Suckers March,” which closes the concert.

Admission to the concert is free. The Wind Ensemble, Wind Symphony, Symphonic Band, Percussion Ensemble, Trombone Choir and the SFA Faculty Brass Quintet will collectively present the Kaleidoscope Concert at 7:30 p.m. Tuesday, Nov. 16, in the Grand Ballroom. For additional information, contact the School of Music at (936) 468-4602.