Dramaturg, fight, intimacy directors have crucial roles in bringing ‘The Moors’ to life 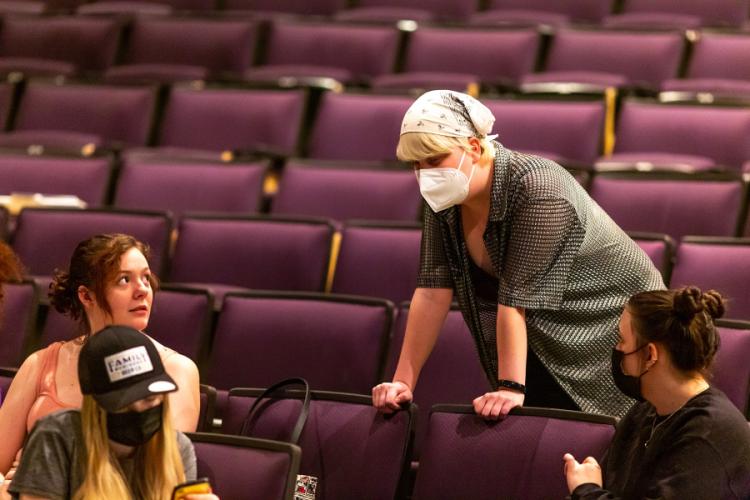 Gonzales senior theatre student and intimacy director for “The Moors” Theo Moers, standing, discusses the play with cast members during a rehearsal. The SFA School of Theatre and Dance will present Jen Silverman’s play “The Moors” Sept. 29 through Oct. 2 in Kennedy Auditorium on the university campus.


NACOGDOCHES, Texas – Beyond delivering lines in a play that are confident and convincing, an actor has to understand the intentions of their character and behave persuasively on stage, and costume and scenic designs have to be authentic to lend true credibility to a performance.

Long before Stephen F. Austin State University School of Theatre and Dance presents Jen Silverman’s play “The Moors” Sept. 29 through Oct. 2, the research and planning of the behind-the-scenes team of Dramaturg Kyla Carter, Fight Director Juli Flores and Intimacy Director Theo Moers was called upon to make the show as believable as possible.

In performing these duties for “The Moors,” Carter holds the director and production team to a high standard of historical and textual accuracy; Flores brings the play action to life in exciting yet safe ways; and Moers helps to ensure the well-being of actors who participate in intimate scenes.

“These students are creating key artistic parts of the production while making sure that everyone involved remains safe and healthy through the whole process.” said Dr. Slade Billew, assistant professor of theatre and the play’s director.

“The Moors” is about two sisters and a dog who live out their lives on the bleak English moors, dreaming of love and power. The arrival of a hapless governess and a moor-hen set all three on a strange and dangerous path. Described by New York Magazine as “a Brontë mashup swimming in whimsy,” “The Moors” is set in the same time period as “Jane Eyre” or “Wuthering Heights” and is a comedic take on those kinds of stories, according to Billew.

Carter, a senior from Stephenville, received her script for “The Moors” last May, and she’s been reading through it weekly since. As a dramaturg, her job was to convey the voice of the playwright during the production process. To prepare for this, she familiarized herself with Silverman's body of work and also conducted as much research as possible into the lives of the Bronte sisters, “whose harrowing, passionate novels of the early Victorian era served as inspiration for ‘The Moors,’” Carter said.

“The historical and geographical terms contained within the text required some background knowledge as well,” she said, “and I constructed a detailed document containing the production history of the show since its world premiere at The Yale Repertory Theatre in 2016. In short, my job was to research and provide in-rehearsal consultation based on my knowledge of the location, time period, and of the playwright's intent. I have a sizable folder dedicated to this goal.”

As intimacy director, Moers, a senior from Gonzales, researched ways to present intimacy choreography to actors. “I also did a lot of looking into resources for actors that were either curious about certain things, or needed an extra hand with approaching the work healthily,” they said. Moers also guided discussions with the cast and fellow directors about intimate or emotionally complicated moments in the show, and how to approach those as an actor without “taking the mindset home” after rehearsal. Additionally, Moers served as a liaison between actors and directors, as well as being an advocate and resource center for actors who need specific types of support.

As a result, actors began to openly and confidently talk about boundaries and consent while working on intimacy on stage, which became a rewarding part of Moers’ job. “It’s so amazing to see people genuinely love the work because they feel safe to explore,” they said. “They know that their autonomy will be respected even while we dive into collaborative work. They help to make it fun work, instead of scary or clinical, like some might first expect. It’s thrilling to be a part of the change towards consent-forward practices in theatre, and I’m honored to have made this show a part of that process.”

For Carter, seeing the play come to life after months of research and preparation has been fulfilling. “My preparation process for this show was long, and I absolutely fell in love with the story during my research,” she said. “It's this incredible display of passion and loneliness and hunger, and for so long, it only existed in my head. Making it real and bringing it into the world has been the most gratifying part of the process.

“The cast members embody their characters so well, and the production team is incredibly collaborative and always ready to experiment,” she added. “In just a few days, audiences are finally going to see this surreal, spectacular show. I couldn't be more thrilled. ”